Gearbox V2 vs V3 for intermediate

Gearbox V2 vs V3 for intermediate

Last time we briefly covered the history of both systems and most basic differences between them. This time I'd like to move to more advanced topics and dispel some myths I described in the first entry. If you don't remember or never read it - start HERE, otherwise you can have some trouble understanding what I'm taliking about :P

I think that popular belief about V2 replicas being much more prone to failures and crashes than V3 it totally wrong. First of all, market is full of AR15 replicas, there's a lot more of them than any other type. No surprise that on most of skirms we can see mainly AR15 replicas. If we're on some airsoft event and there are for example 10 AR15 guns, 5 AKs and 5 G36, and suddenly one of ARs breaks down we'll probably see everyone gather around and complain about V2, talk about V3 superiority because someone bought his V3 in 90s' and it still shoots great! And it can be used in temperature of -110 C and doesn't break! And all parts are stock ones! I've seen that a hundred times. Let's leave fairytales to children.

As we know from the previous entry, both systems share some crucial components. What is the reason that AR15 replica and AK/G36 replica from the same manufacturer can be worse and more prone to failure that replicas from different brands? Wheels and piston are the same and those are the parts that get damaged most frequently. I know it from my technical experience (and I still support my thesis) that 90% of damage (or even more) is caused by the human factor, mainly misuse of airsoft replica. In many cases - using low quality chargers, usually added to the gun. They don't charge the battery, they kill the battery and cause multiple jams. And so we can hear the user screaming "damn you, stupid M4" as he throws it into the ground. Of course he doesn't take into account the fact that he charged his battery full night, usually 12 hours because he likes to sleep a lot.

Next thing - cleaning the barrel. The cleaning rod added to the replica is usually treated as a curious little souvenir without any practical use. Most of the times our fellow airsofters never really use it. And the barrel of his replica is full of dirt and sediment, and his replica shoots like crap. "Damn it! I should have bought G36 like my friends!"

Of course there's a lot of strange behaviour like constant playing with chambers, barrels and rubbers - of course without any proper skills. Shooting empty. Damn, I once knew a guy who used empy shooting when we wanted to discharge the battery, so he could later charge it once again! But that was like 6 years ago, a stone age of airsoft.

Ok, so we've got human factor covered, more or less. So when we leave it out of equation, we've got only pure facts left. Key parts of both V2 and V3 gearbox are the same. How about the gearbox case? As I mentioned before, they were not designed for the FPS level that we currently use and... for the temperature. Japan is generally a bit warmer country. Yes, V2 gearbox case sometimes tend to break in low temperatures, much easier than V3 gearbox. It is a result of both their design and materials used to create them. Plus V2 break more easily due to high power tuning. On the other hand - when was the last time you've seen good DMR based on AK replica? No, not SWD, just AK. Not to mention G36. 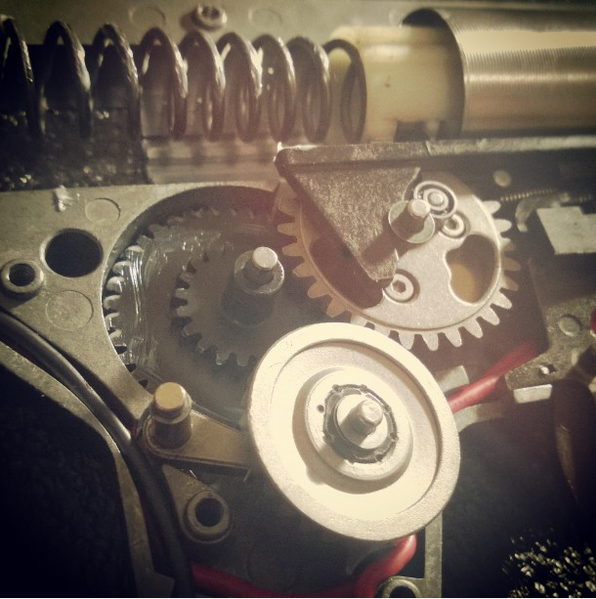 So here we are, slowly approaching a thing that is very important to me. The king of the Art of Tuning: location of gearbox case in the body, stabilization and chamber. This is a true King of Tuning, so-called alignment. Without proper alignment we won't acheieve stable FPS, good range and repeatability of shots. And in my opinion this aspect is just terrible in V3. Every replica from the AK family has the gearbox case stabilized in two planes, with two points:

And... that's it. There's nothing more to stabilize the gearbox case in the body. It's basically the same in every system: VFC, LCT and TM. It is a quite unfortunate solution. When the chamber reaches the GB it can sometimes push it back. Why? Because most of the pistol grips are made of plastic, that is why the spot for the screw can bend a little and that causes misalignment. What is more, if the gearbox case is not tightly fitted into the body we can accidentaly move it right or left when we're screwing the fire selector thus causing... that's right, misalignment. In VFC systems the chamber itself is supported by kind of a brick that needs to be well adjusted - and that happens quite rarelt. What can help it using a special spring. In LCT systems (E&L replicas included) barrel is attached to the outer barrel, that is why the barrel must be matched just perfectly, otherwise chamber won't reach the front of gearbox. And every chamber is different so we've got another problems. The same goes for TM system.

It's a little bit better in G36. Gearbox case is stabilized on three planes, three points, quite similar to V2:

In my opinion it looks much better here. It was extremely uncommon for me to encounter misaligned G36 replicas. That system works very well, but... Chamber just hangs in the air. The applied design requires perfect quality of manufacture, I believe ony TM is able to achieve it. Chamber relies on two pin and is pushed back by a spring. That is why the nozzle length and space between those elements needs to be flawless, otherwise there won't be a proper compression. Those elements tend to bend so we need to be extra careful. What is more, the chamber is not supported by the front of GB.

AR15 system based on V2 is stabilized by:

Quite similar to G36, but here the misalignment is the most common. Every manufacturer has got a little bit different sizing and dimiensions. That casuses a chance that gearbox case will move in those dimensions in relation to the chamber, but there is also one more important possibility. In all those cases we can regulate the alignment of gearbox case with different gaskets, but in this system it is the easiest to adjust the chamber pressing to the GB. We can use numerous orings or springs. There's a lot of different patents for that, every technician has got his own.

So now we know a bit more and what can we do? You will learn in the third, final part!