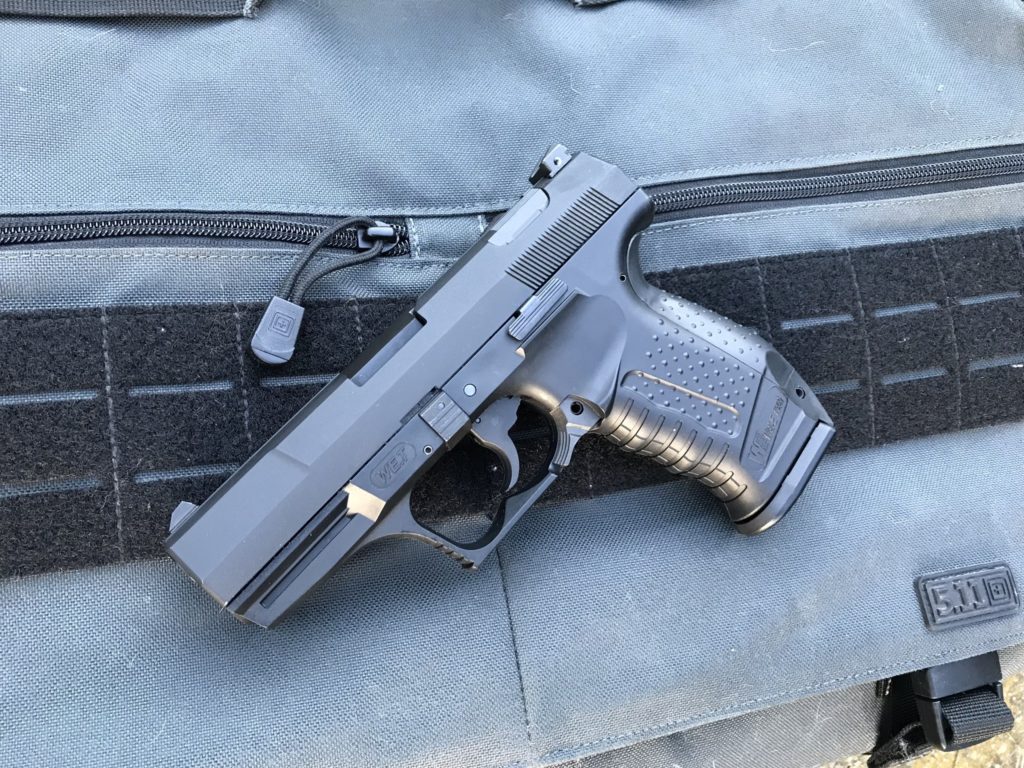 The pistol is sent in a black, cardboard box, that is marked with the producer logo and some Taiwanese text (which I have literally no clue what it says). If there weren't the sticker with product code and name of the importer, I wouldn't really know what is inside the box. Talking about the inside of the box, there are: 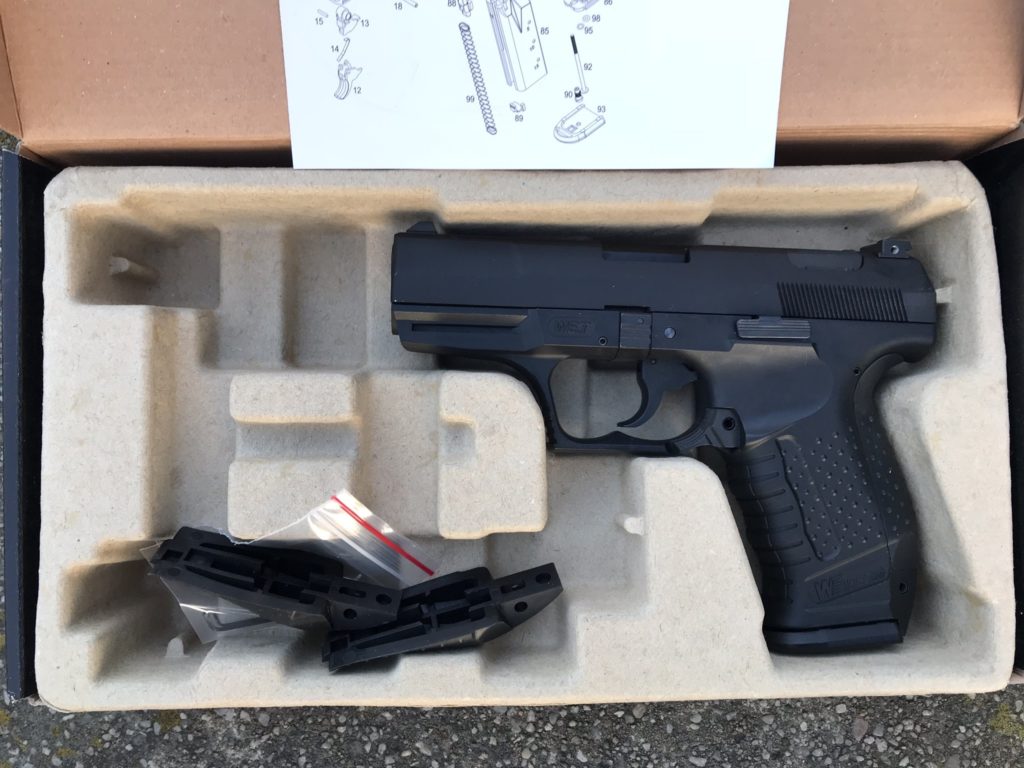 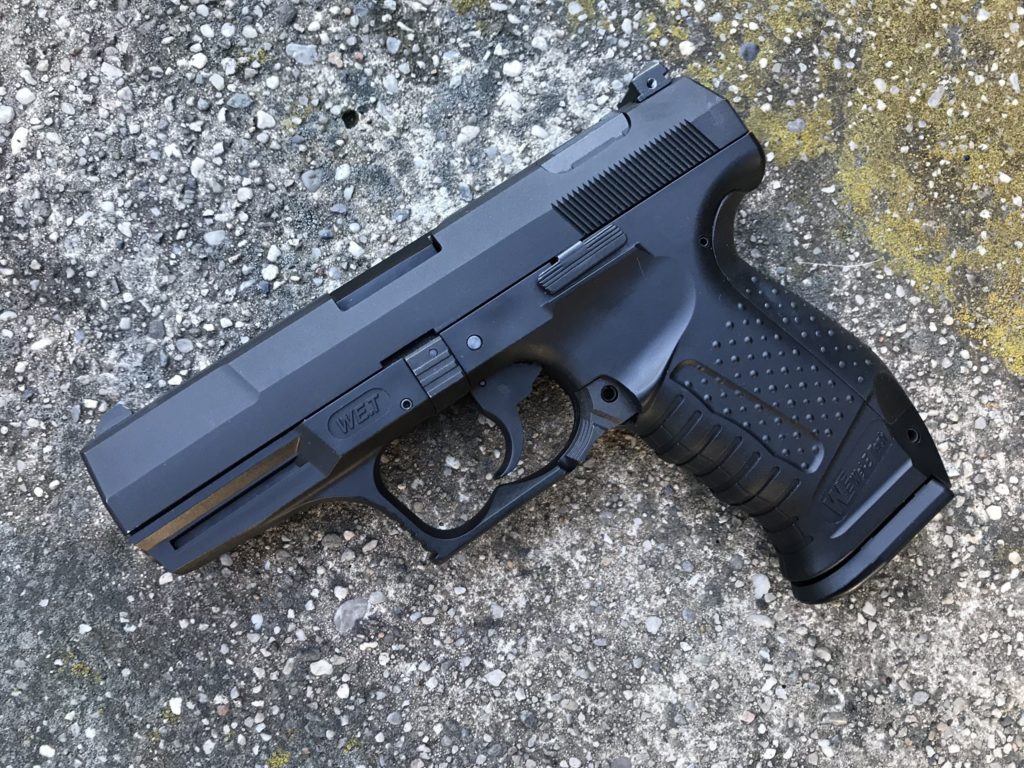 The first impression of the WE99 is pretty good. It replicates the original Walther P99 (older version) properly. The pistol has a nice weight balance and seems to be sturdy. If you shake the gun, there is some wobbling that can be heard, which is caused by the outer barrel. Who has ever used the 1911 pistol from Army will know the exact feeling. 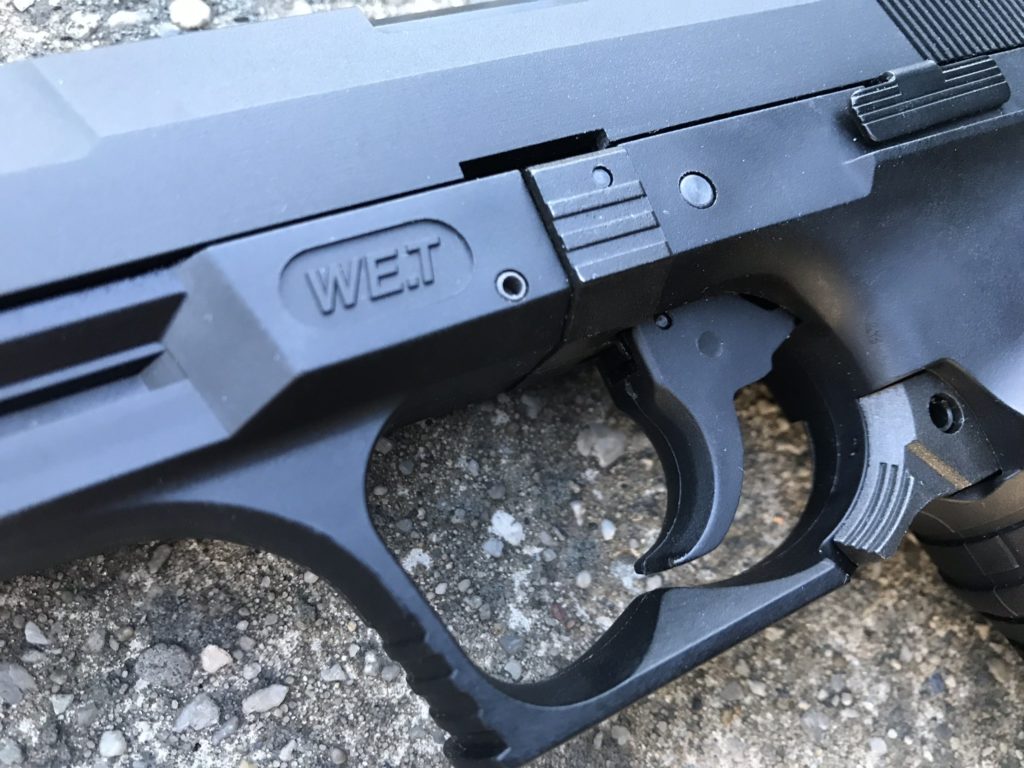 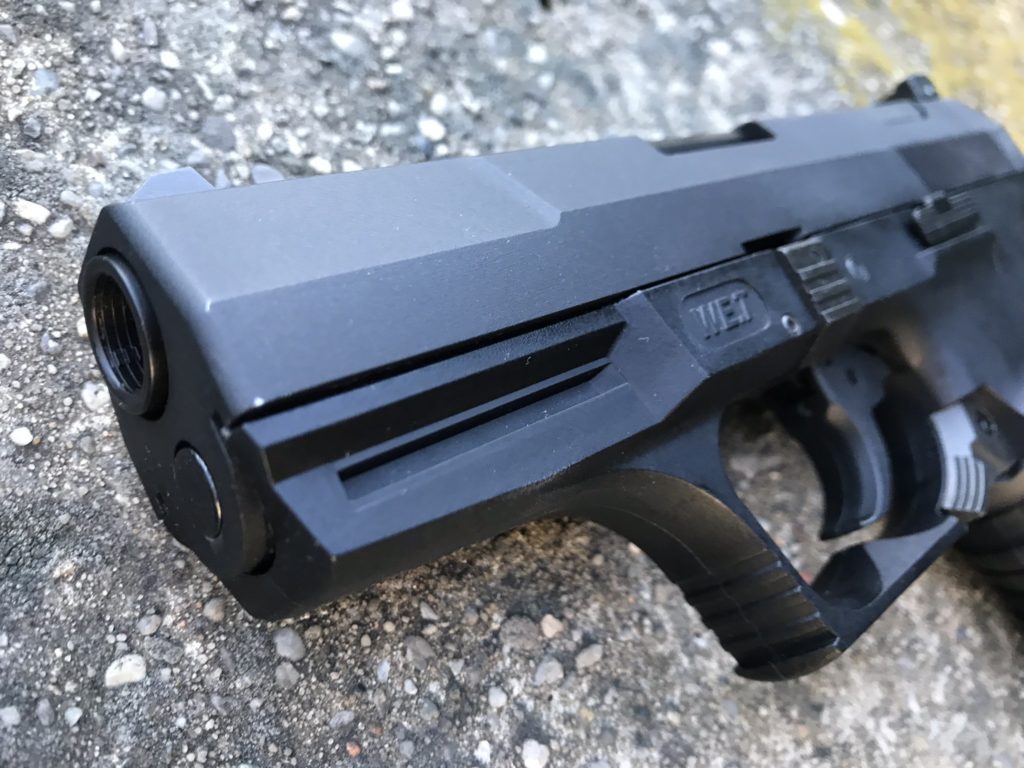 The WE99 frame is made of black matte polymer. There are some marking of the producer and the classic "MADE IN TAIWAN" and "READY SAFETY MANUAL", the second one is also placed in the German language, which seems to be a reference to the original gun, that is made by the German manufacturer. 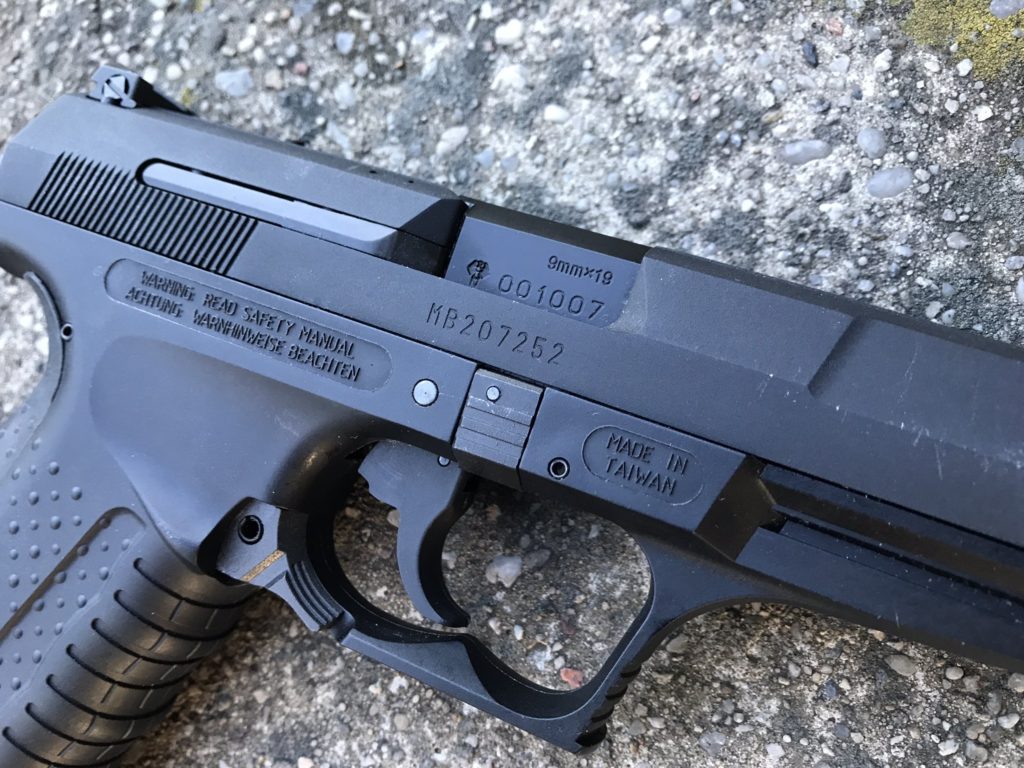 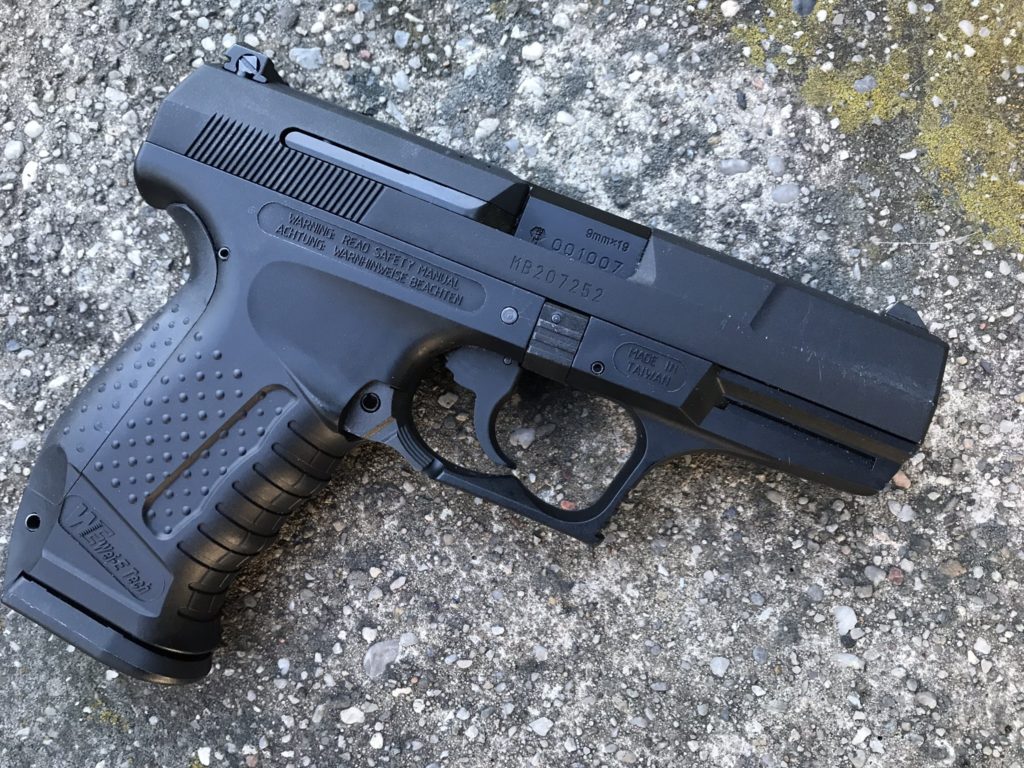 The slide is made of the metal and covered in graphite color paint. The coating seems to be solid - I couldn't scratch it during my tests. The slide has a built-in extractor, which stands out with its deep black color. On the right side of the slide, there is the serial number of the pistol. 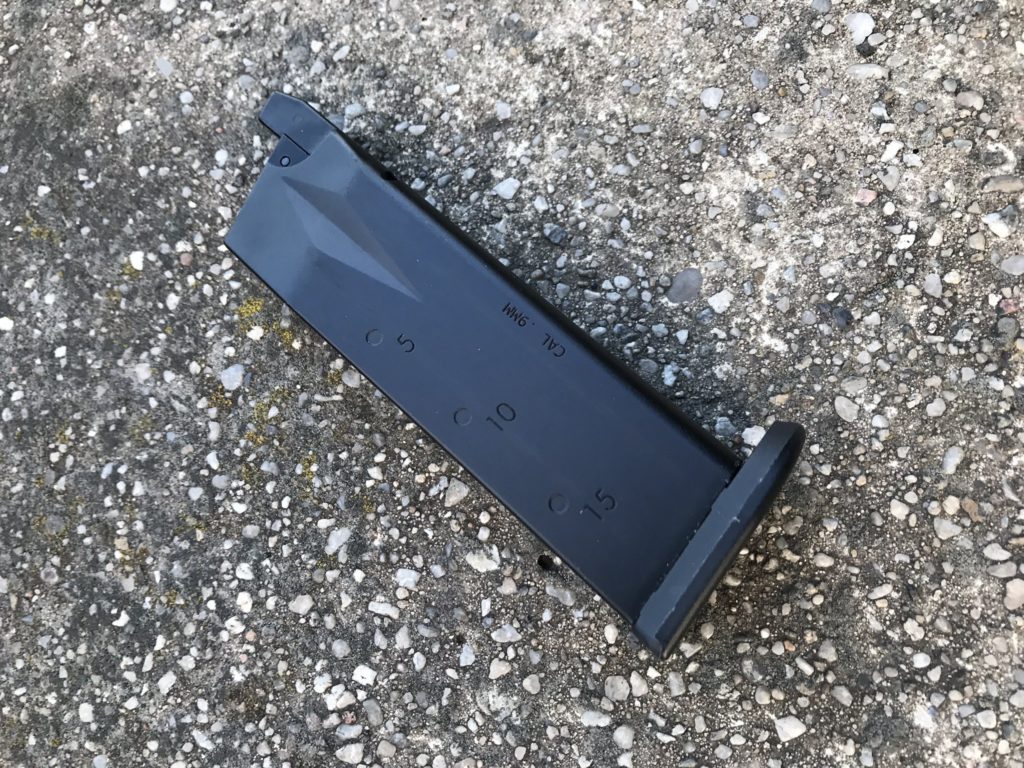 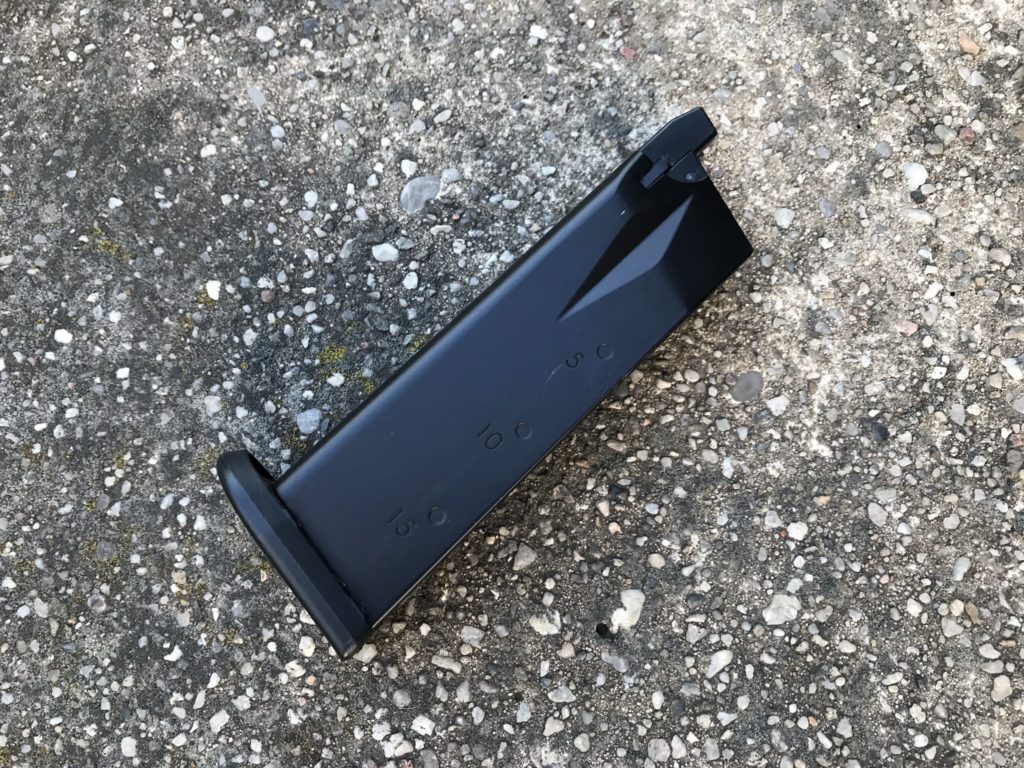 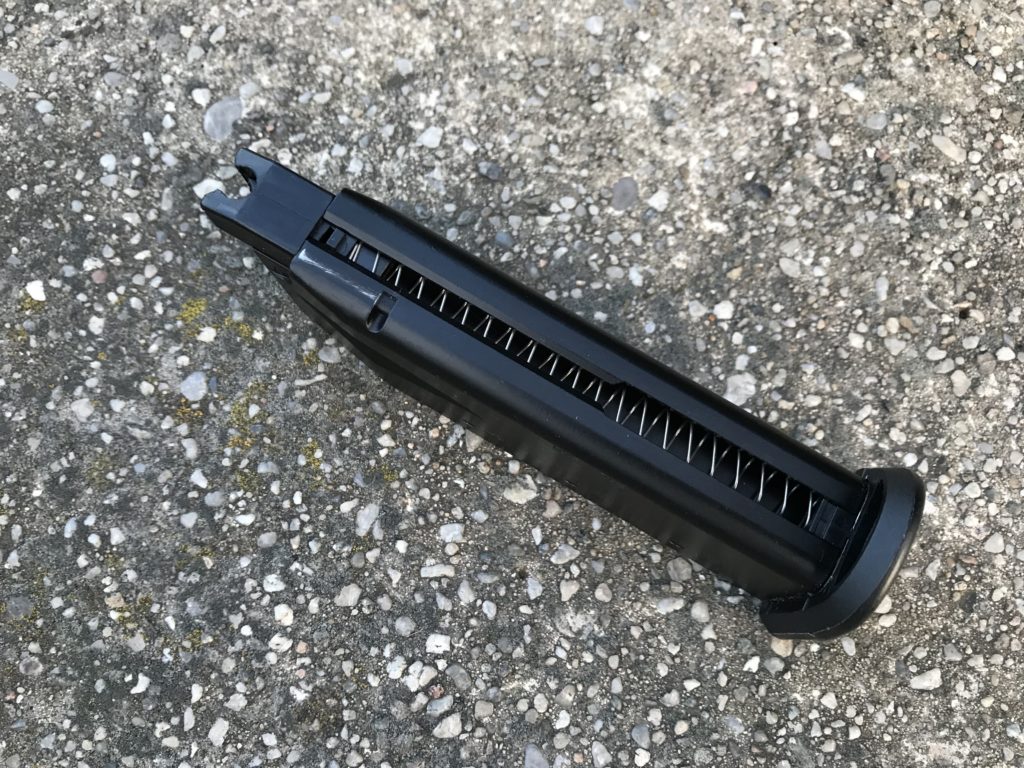 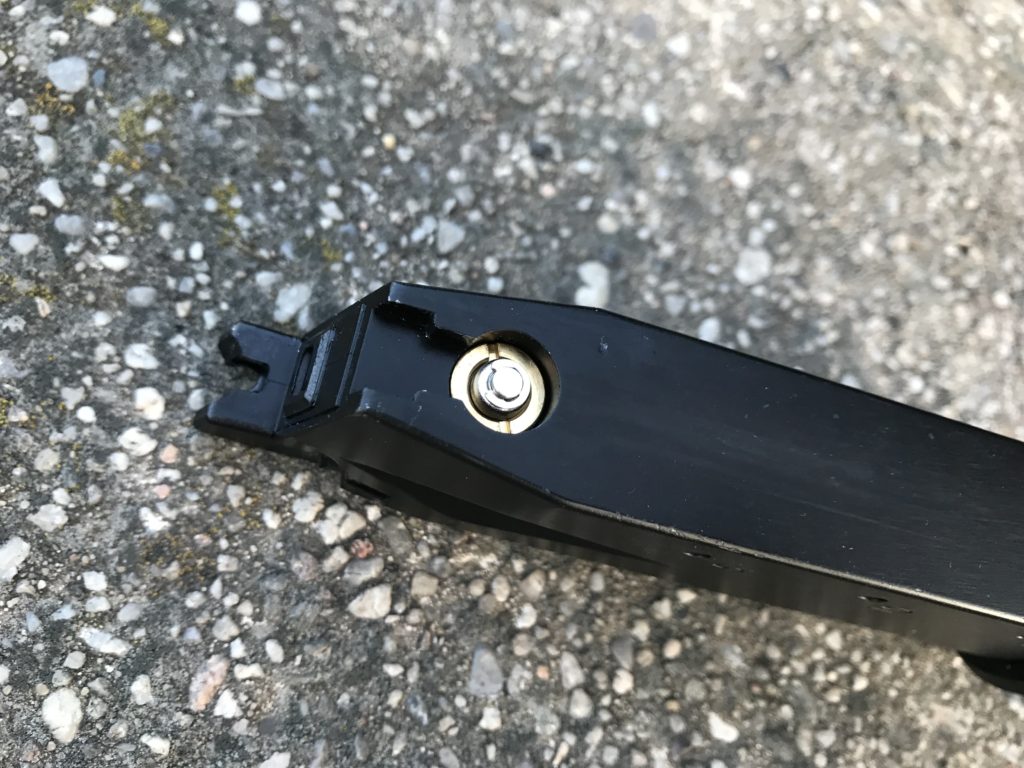 The magazine is made of metal. Its plastic bottom plate is a little loose. The magazine has an imitation of the holes in a magazine where you can check the number of the bullets inside. There is also the "9 mm " caliber marking engraved. The magazine has the capacity of 22 bbs. 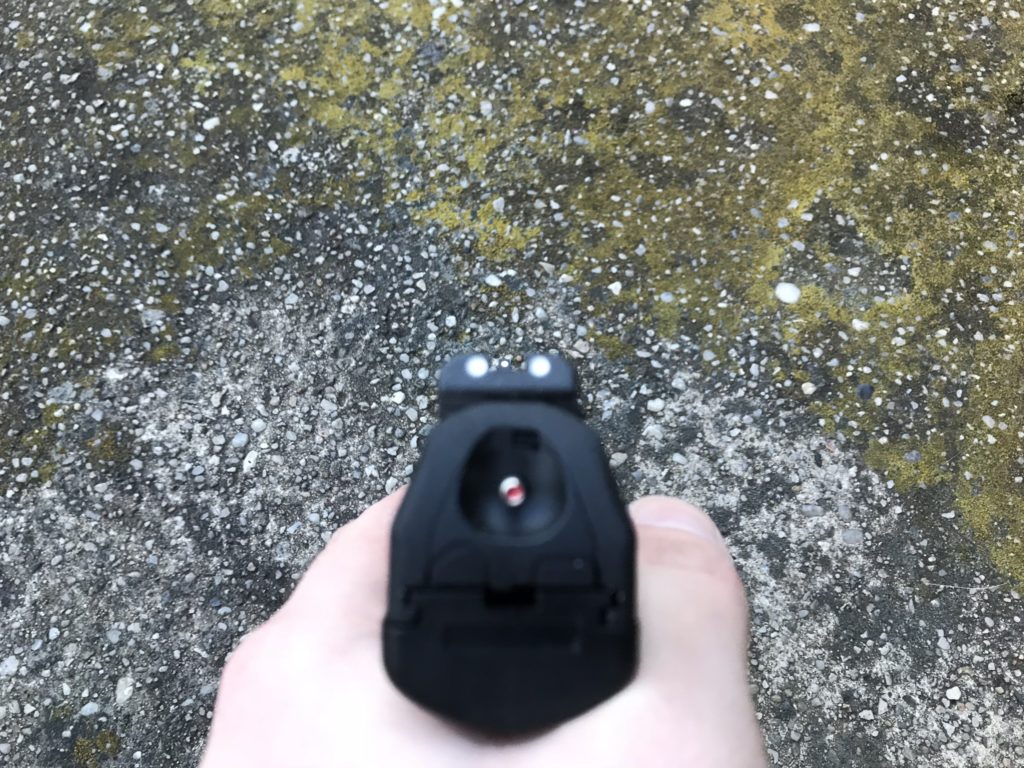 The pistol has 3-dot type sights (which are my favorite!). They are made of very soft metal - some dents and scratch marks can be spotted on them. The sights are easy and intuitive in use. The rear sight can be additionally adjusted to the left or right. 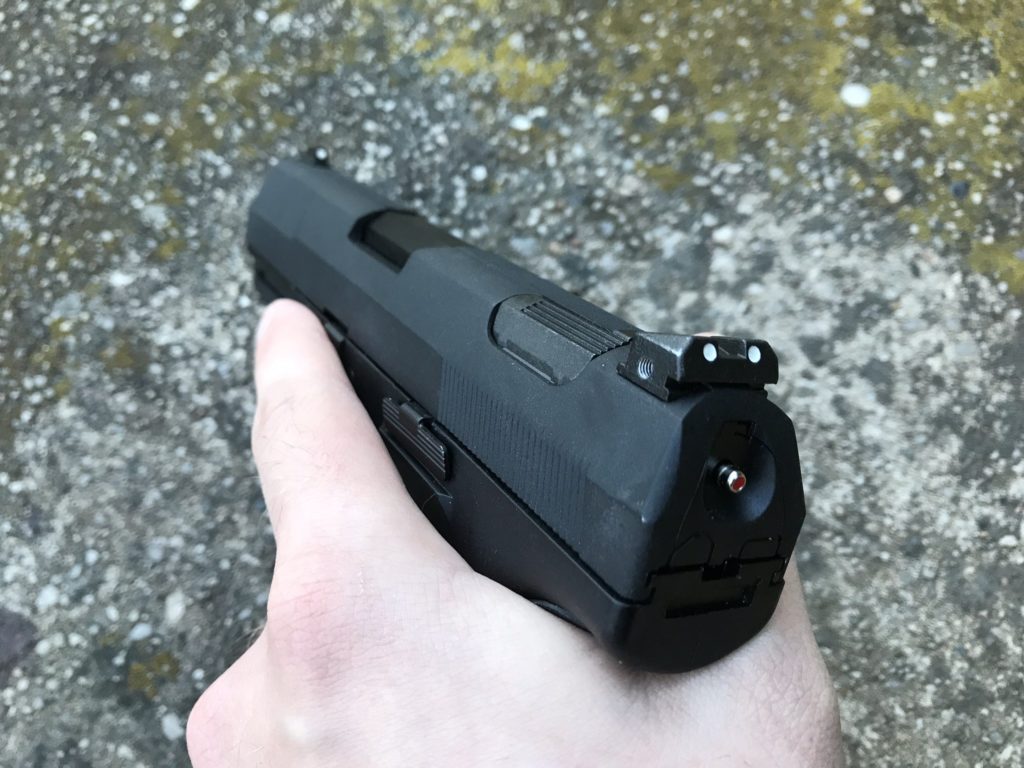 The replica has a built-in cocking indicator - just like the real firearm. The red pin outside the slide means that the hammer is cocked and ready to fire. However, sometimes it doesn't lock on the back position - especially when the gun is racked with the barrel pointed at the ground. 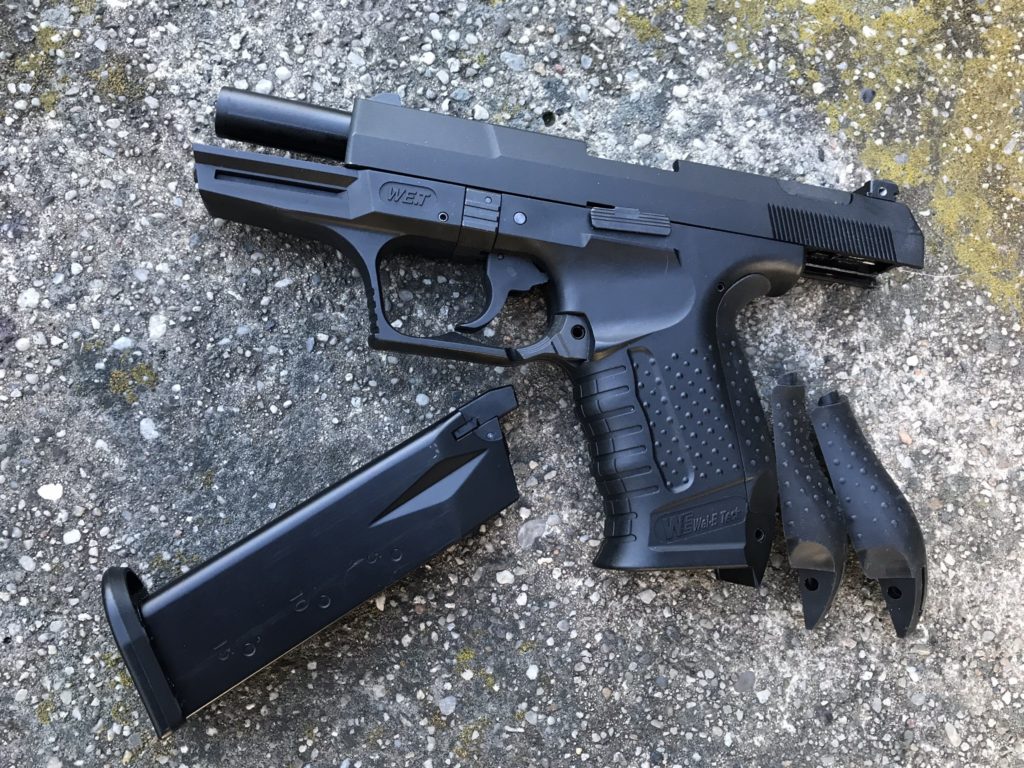 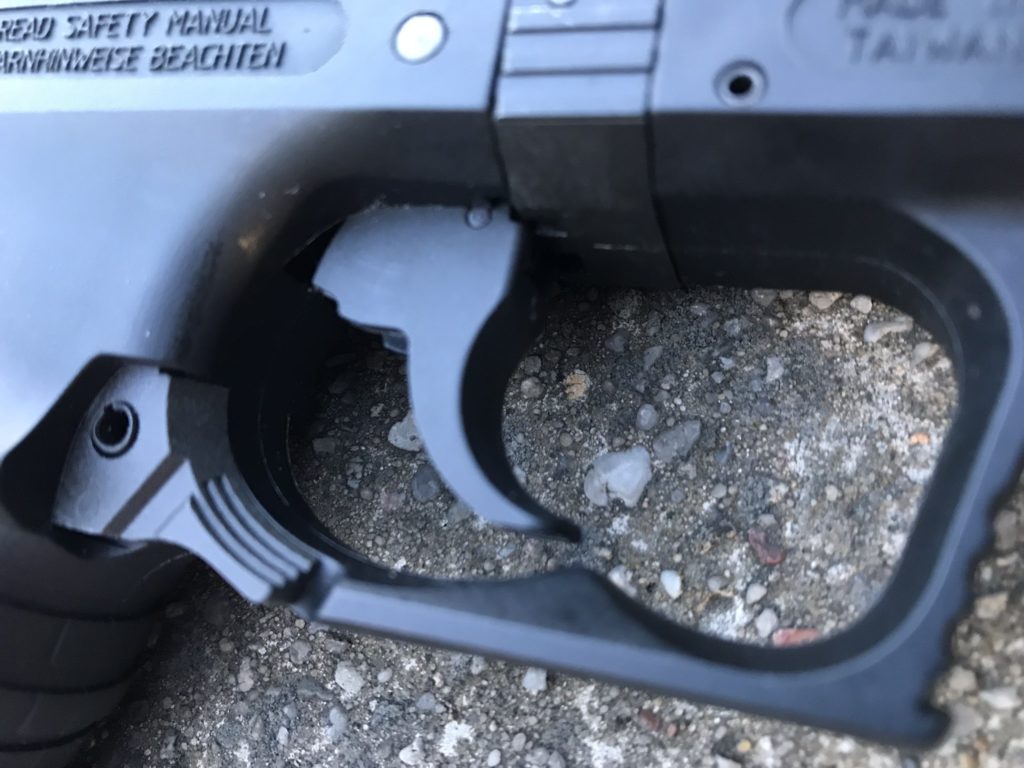 The SA trigger works pretty smoothly and is very light, but the trigger pull is really long. However, the reset is quite short and the cowboy style shooting is still possible.

I've shot the pistol indoors with the temperature of about 15°C. On the one loading of the magazine with the gas, it managed to shoot 29 times.

The accuracy was tested in about 10 meters, in standing posture with the Nuprol 0,28 bbs. The longest distance between the holes was 5 centimeters.

The WE99 is undoubtedly a very interesting replica, that stands out from all the Glocks, 1911s and M9s. The performance is similar to the most of the medium-class gas pistols - it's not incredible, but simply does its job. The only drawback is the complete lack of repair parts like the nozzle.

If you are looking for more information on gas-powered pistol replicas check one of my previous post.