How to cheaply increase the power of a sniper airsoft gun?

A cheap sniper airsoft gun is a kind of the Holy Grail of airsoft. An elusive goal that many players dream of achieving. Speaking from my own experience, I must admit that it is a difficult journey, requiring a lot of patience. Simply put, it can be said that if we want to spend little money on improving the performance of our airsoft gun, we should be prepared for the fact that we will incur a considerable cost of time and nerves. However, I do not think it is impossible. What is more, it can be said that by taking up this challenge, we will get to know the secrets of spring replicas to a good degree and we will certainly improve our understanding of the airsoft technique. I do not hide, however, that this is a task that should only be undertaken by people who already have some technical experience, whether at work with electric replicas or in other fields. 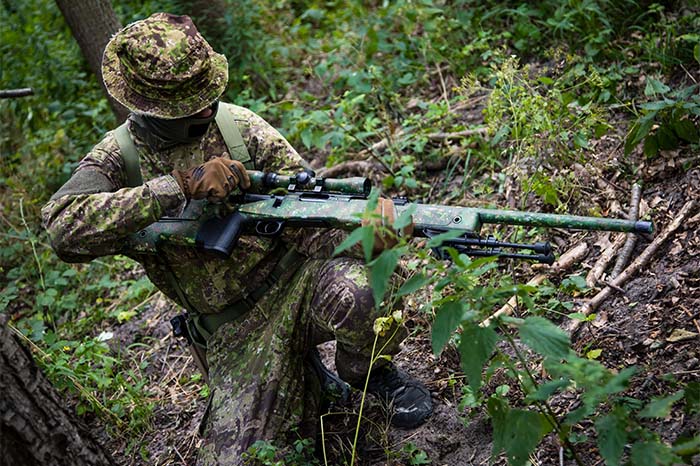 So how do you go about power tuning your sniper spring rifle? An example will be the SA-S02 from Specna Arms, which is made mostly in popular VSR standard. The case will be similar in the BAR-10 replicas by JG and, for example, in some 700 series replicas by CYMA. The power generated by the replica is influenced by how hard its main spring is. It compresses the air enclosed in the cylinder and drives the piston's movement and drives the BB. For now, we will ignore the losses of this air caused by leaks at the joints of the piston and the head with the cylinder. This is later in the article. It seems obvious that we need to use a stronger spring and that should increase our power. The problem is that if we have a standard airsoft gun straight from the box, its other internal parts are not necessarily adapted to work with the harder main spring. Probably the first component to fail will be the spring guide, then the piston itself, and finally its catch in the trigger assembly. 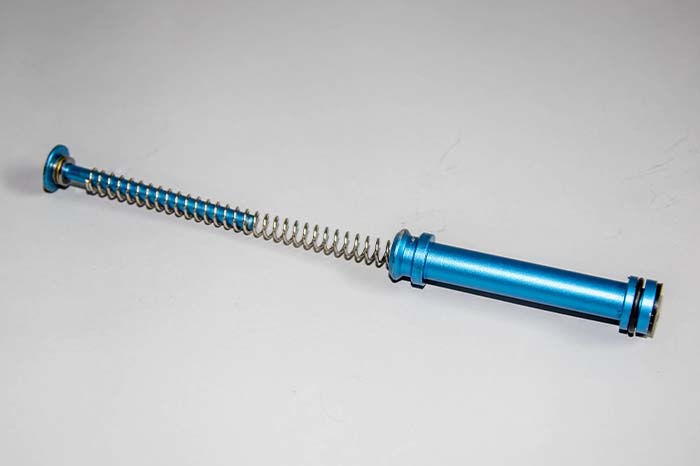 In order to comprehensively approach the tuning of our airsoft gun, we must protect ourselves against premature damage to each of the above-mentioned elements. We have to replace the plastic piston and the spring guide with metal ones, and the parts of the trigger assembly have to be replaced with steel ones. In this way, we will prepare our replica to cooperate with a stronger spring. The first piece of the puzzle will be the tuning kit. In a low budget, we have MB02 and MB03 airsoft gun tuning kit from WELL. Then we should take care of the trigger unit. A dedicated, ready-made system of this type often exceeds the price of the entire airsoft gun, so we have to buy a piston stopper and a trigger socket separately. In addition, a steel trigger element responsible for maintaining the spring guide. Items purchased separately must be replaced manually in the serial trigger assembly. 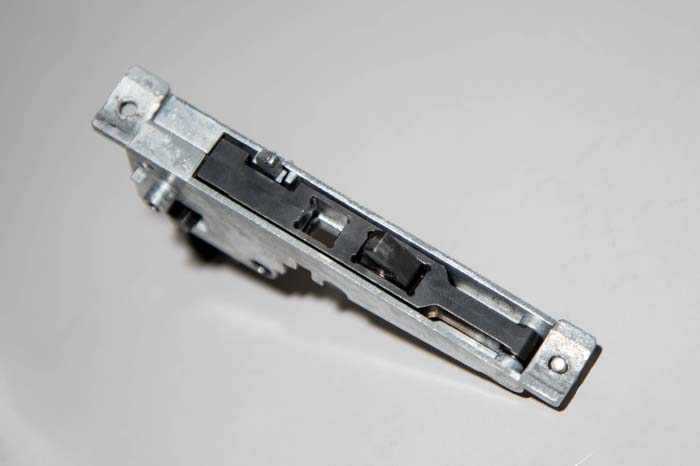 The title of this heading is no coincidence. Unfortunately, the purchase of the right parts is only the beginning of our adventure with sniper rifle tuning. First of all, there is a small chance that the purchased piston will fit tightly into our cylinder. We have several ways to fix this problem. First of all, we can try to choose a better gasket from the set for AEG replicas. In some cases, this may prove to be enough. Unfortunately, my experience shows that the cylinders and pistons for sniper rifles are slightly larger than their counterparts in electric replicas. For this reason, I recommend buying a set of O-rings at the automotive department in a DIY store or those dedicated to recently popular air conditioning systems. The latter are usually green. Then, by trial and error, we select the o-ring so that the cylinder assembly undergoes the so-called syringe test, i.e., that it cannot be pushed out of the air if we block the nozzle with a finger. 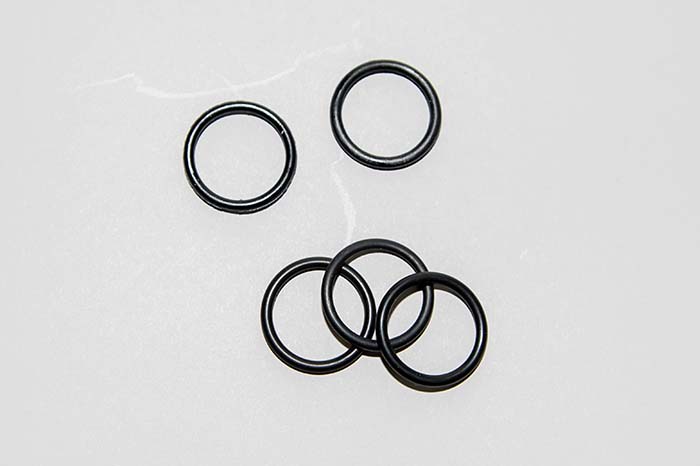 The next stage of our work, where focusing on precision is important, is the preparation of the trigger unit. When putting on the piston stopper and the trigger seat, it is worth measuring similar elements that we take out of the replica and compare the dimensions. If the removed part of the replica is narrower or shorter, then with a high degree of probability the new element will have to be adjusted to the size of the original element. It will be easy to see in the photos I attach. The usual steel elements are black. Everywhere they have silver inserts, they have been ground down. The trigger element that holds our spring guide is very often too wide and will probably also need to be sawn. 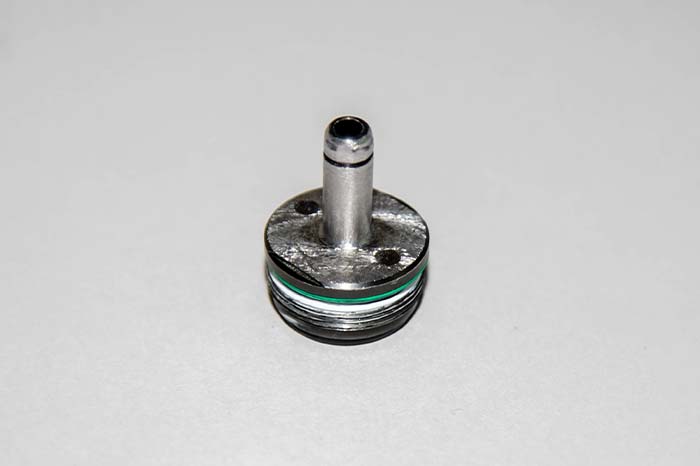 The last element worth replacing is the cylinder head. In sniper rifles it is integrated with the nozzle. The budget proposal of such a part is an element produced by PPS Airsoft - steel cylinder's head for the VSR replicas. Here again, I propose to compare the dimensions of the new part with the new part. In my case, the nozzle was thicker than the original one and needed to be ground. Importantly - it has a different design than the serial one. It tapers down at the end and also has a cutter that holds an extra gasket. This solution helps to keep the set tight. The cylinder head itself also has a gasket. Again, it is worth replacing the one that is added to the set with another one. Therefore, the aforementioned set of O-rings may prove to be useful. In my case, it also helped to wrap the cylinder head thread with Teflon tape, but choosing the right gasket should be enough.

The best way to check if we have put the airsoft gun together correctly is to perform a leak test. First of all, we need to make sure we don't have a BB loaded. For this purpose, we can make a test shot in a safe direction with the magazine removed. Then we have to close the inner barrel of the replica, for example with a finger and pull the trigger. If the air is escaping, we will sometimes hear a slight hum. The most important thing is that after about 3 seconds, when you unplug the barrel, you hear the sound of an empty shot. This means that the system is tight enough. Of course, the longer the air remains in such a test, the better, but there are other factors as well. It will be important to choose the hop-up rubber and which chamber we decide on, and this is a topic for another article. 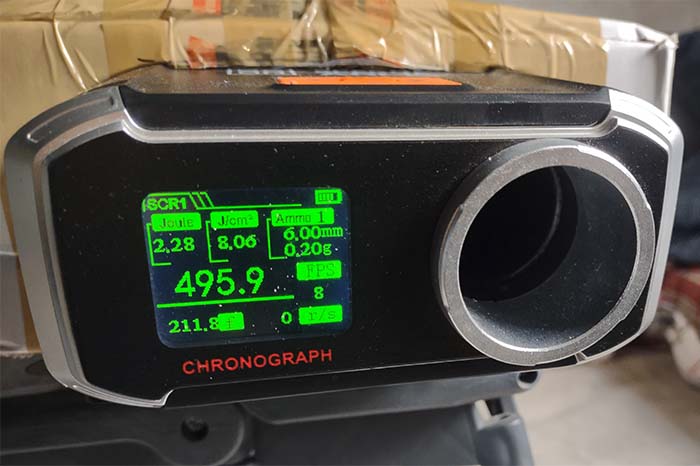 After applying the advice from this article, we can expect real performance at the level of 500 fps with a deviation of 5 fps. Considering that you can close such a project with the purchase of a replica in the amount of about PLN 1,500, including the barrel and the hop-up rubber, I think that it is not too bad. Unfortunately, as I mentioned, we have to be prepared that most of the purchased elements will have to be cut, sanded or adjusted in a different way. On the one hand, it gives a lot of satisfaction, but it can also be quite frustrating during work.