In the previous part of the article, I've told you about the basics of concealing yourself in the woodlands during airsoft skirmishes. I've done my best, to show you the most universal tips that don't require any or much additional equipment. This time, we'll talk about that special camouflage equipment that you can get to improve your camo even more and become almost invisible on the airsoft field. What's on the market nowadays?

Probably it's one of the most recognizable types of camo ever. It's as iconic as the great sniper mission from the Call of Duty from 2007 when it was a cool game with no funny laser guns and pink uniforms. The ghillie camo is also well known in the pop culture, where it always means a professional sniper on duty. A ghillie is a ghillie, of course, of course. However, if someone isn't so sure - it's a special suit made of pieces of dyed material with different lengths, structure, and colors. They're sewed onto light mesh or piece of uniform if it's a DIY version. 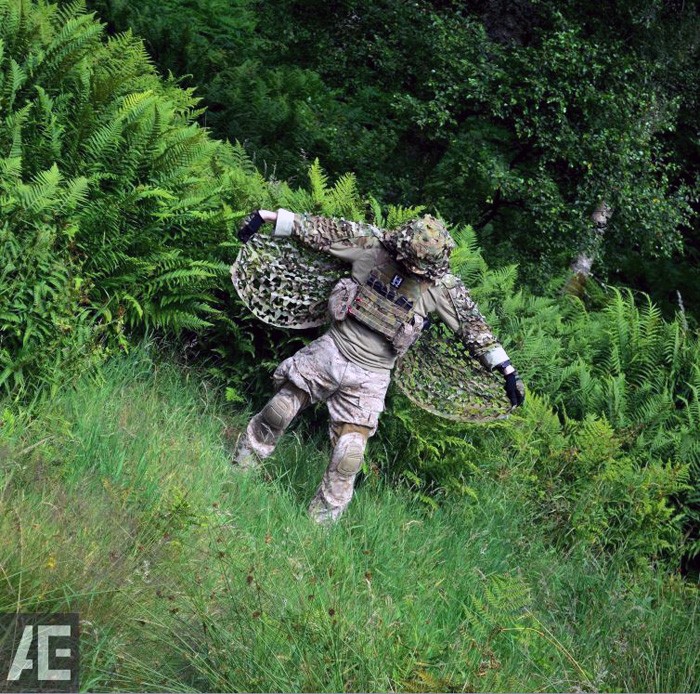 What are the pros of this kind of gear? If you're not running around, a fine piece of ghillie that is suitable for the terrain, and has additional vegetation can almost guarantee invisibility. However, when it comes to maneuverability, the parts of ghillie suit can attach to almost anything in the terrain, especially the pants. The whole suit is also pretty heavy, and when it becomes damp it can be even two-three times heavier. In my opinion, it's a highly effective solution in the world of camouflage. Nevertheless, it's not worth to wear that much camouflage. It decreases mobility in dynamic situations like airsoft skirmishes, where we play fast and on quite short distances.

Currently, it's my favorite type of camouflage systems. I wonder how to describe the Viper Hood to you. It's a ghillie but only for back, arms and head. In comparison to the ghillie suit it's very minimalistic, but if handled properly, still gives invisibility. 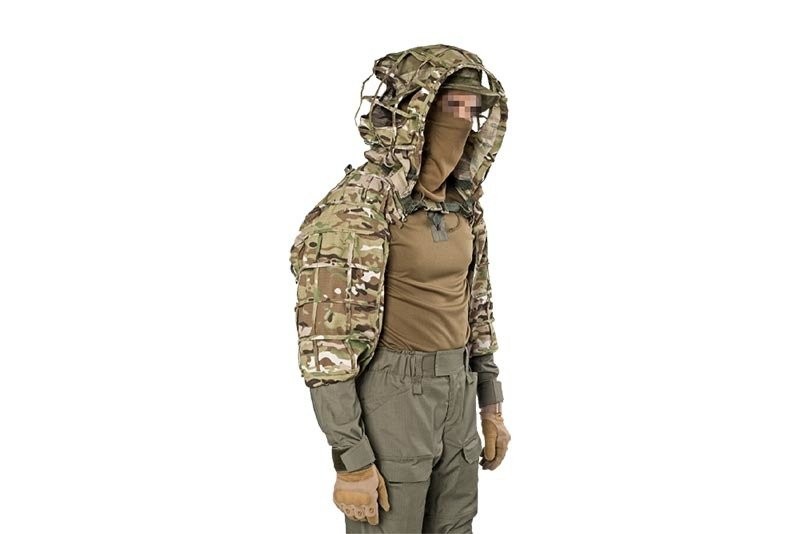 The sniper hood can be worn by everyone from a rifleman to the recon, marksman or even lmg operator. More and more airsoft teams start to wear Viper Hoods for whole squads. As said before, the Viper Hood is much smaller and lighter than regular ghillie, but still works like a charm. Its biggest asset is the lack of enormous quantity of the camo material, that could get caught into the bushes. The other noticeable advantage is the fact, that there is less material to drain the water from the environment. The air circulation is also crucially better (but during hot summer it's still a pain in the ass). The last thing - when Viper Hood is not used, it can be compressed into a small package and attached to the backpack or another piece of gear. 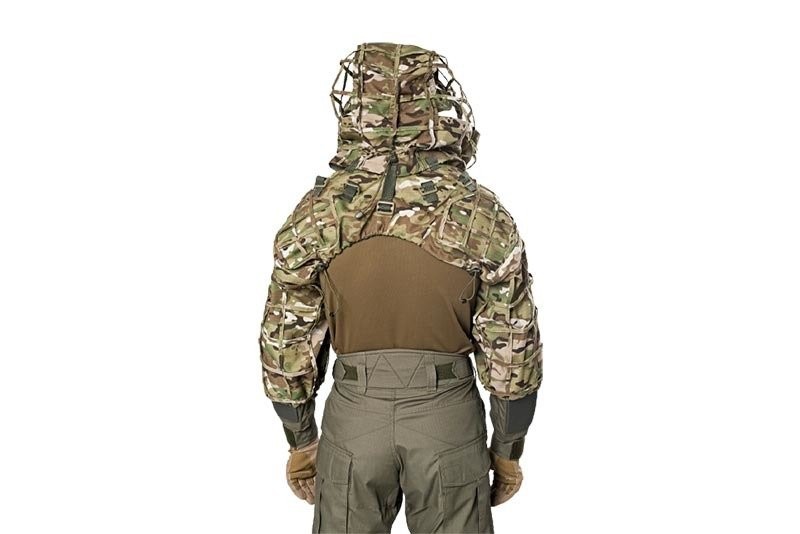 The biggest disadvantage of this gear is the fact that its another layer of clothing, so during summer it can be rough to wear on not dehydrate, but it's still much more wearable than the regular ghillie. The other one disadvantage can be the price, but let's not fool ourselves - high quality and innovative gear has its costs.

This type of gear is pretty popular in the hunting world but also gets its attention in the military and airsoft world. One of the most known in the military is the 3D Camo suit from Jack Pyke and all its copies. It's made of laser cut material in the shape of leaves in autumn colors. They're sewed onto a thin mesh that you wear on your regular uniform. The suit is made of two parts - a blouse and trousers. 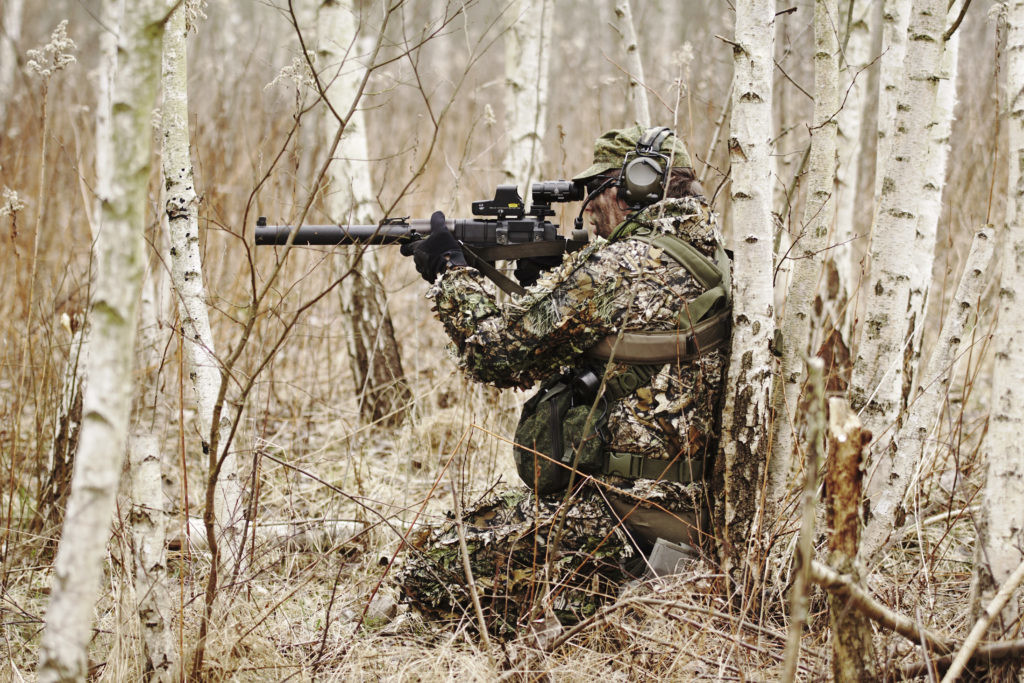 Because it's made mostly of the synthetic fabric, it's very light and doesn't get damp, so it's a kind of good compromise between the Viper Hood and regular gear. There are two main cons. The first one is the vulnerability of the thin material (which is mostly about the Chinese clones of the Jack Pyke). Also, the material can be a little bit glossy in the direct sun. The other disadvantage (or the advantage) of the 3D camo is the set of colors that applies mostly for the autumn or snowless winter. However, it is often said that if something is universal...

It's another type of 3D camo, but it's applied on the airsoft replica. There are 3D laser cut shapes out from camo material and sewed onto self-adhesive tape. Another type of the rifle camouflage system is tape in various camouflage styles.

Camo rifle tapes are very simple in design but very effective in concealing the replica in woodlands. They are also very easy to apply or remove, so you won't need to run a full camouflaged gun in the CQB.

This is the last camo accessory in this article. I've left it for the icing of a cake because it's the less obvious camouflage solution available on the market and it's pretty underrated. 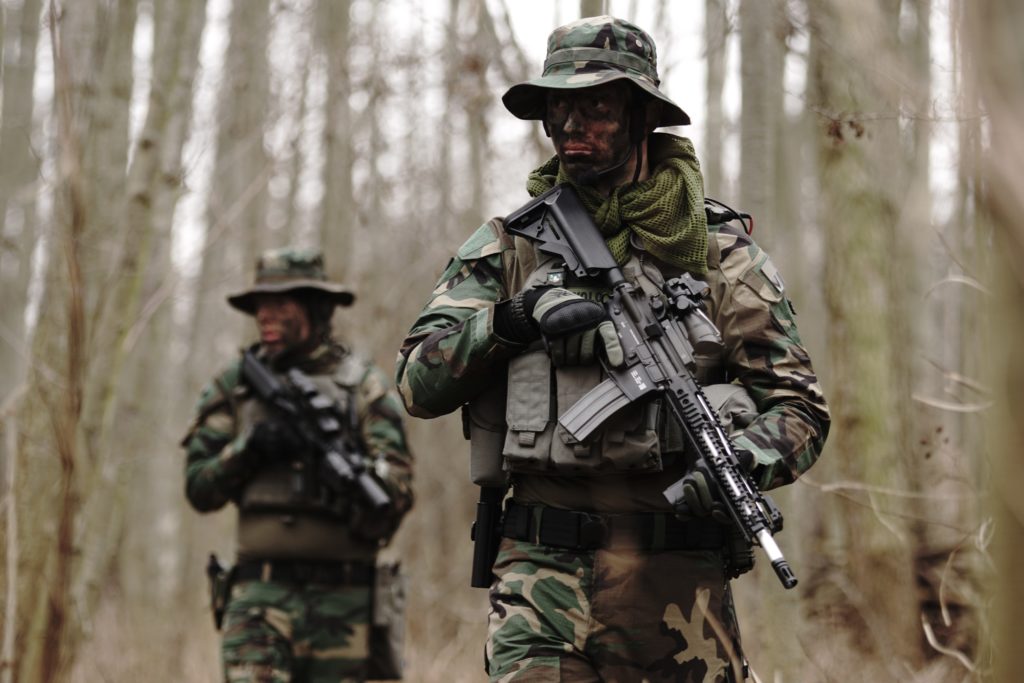 The sniper scarfs are often quite long and wide, making it easy to cover a person in a prone position. Maybe it's not as effective as the specialistic camouflage material parts in the ghillie or 3D cut camo leaves, however, it still can make a clever person disappear in the bushes in the long distance. The scarf can be also applied to the painted replica, in order to blur its characteristic shape.

Check out the camouflage equipment available in our offer!