M-Lok, KeyMod, RIS/RAS - what are the differences?

Nowadays hardly anyone can imagine his replica without any accessories or aiming devices. Without the red dot, flashlight or even the simpliest front grip gun looks strange, when comparing to the full-delta-operator-devsix carbines of other players. It creates a pressure to put something on your replica too. This requires a mounting system and there are few of them available on the market, especially for the AR family. What are the differences between them, which one is the best? After reading this article you'll judge it by yourself.

Rail Interface System/ Rail Accessory System is currently the most common mounting system for the gun accessories. Its construction is very simple - "the ladders" are cut in the material and the mounting screws go through them and the accessory, keeping it tight with the carbine. There are also QD (quick detachment) mounts that can be mounted and dismounted very quickly, with a pull of a single lever. The rail itself often have number markings, which makes the organizing of accessories a lot easier during the cleaning and storage of the gun.

The biggest pro of the rails is their common occurrence on the market and full compatibility - the RIS standard is a solid thing. It is also worth to mention, that currently, most aftermarket accessories have the RIS mount in the package. You can almost get everything you want and it will be compatible with your rail system. However, the RIS is not a flawless system. It's not that cheap to produce, it's heavy and bulky, and the sharp texture of the ladders can be unpleasant to the user. 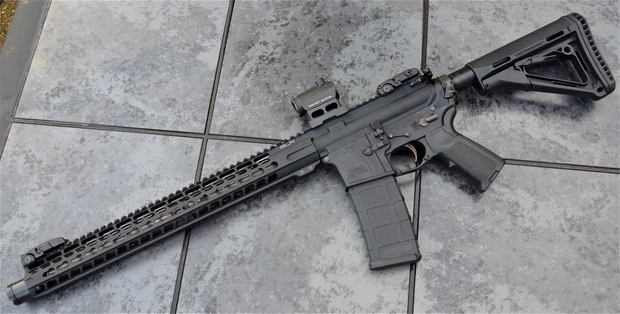 Currently, it's probably the most popular mounting system on the market, especially on the civilian one. It has been projected and produced at first by the VLTOR. The fancy name comes from the shape of holes that are cut in the surface - they look like small keys. The mounting process is pretty simple - you match the key into the keyhole and rotate it inside the handle to make it fit securely.

One of the most significant characteristics of the KeyMod system is its reduced weight when comparing to the standard RIS. The lower weight drastically increases the mobility of the gun and prevents a user from fast exhaustion. The KeyMod handguards are flat and very smooth, thanks to no elements standing out - they are comfortable even without any accessories. When it comes to the popularity of parts, the KeyMod is a nice compromise between the old RIS and new to the market M-Lok. You won't get everything you want compatible with the KeyMod, but lots of most popular parts have the KeyMod mounts that can be bought separately. However, you must be aware that there are currently two KeyMod systems available on the market: the mil-spec and airsoft-spec. The second one doesn't have a small hook under the holes, which makes some of the original KeyMod accessories incompatible and vice versa.

The M-Lok is a fresh new thing on the market and is made by designers from Magpul. It is most probably the response for KeyMod system. Instead of the keyholes, it has a long, rectangular shapes cut on the surface. The mounting technique is similar to the KeyMod one.

What's interesting, is that the USSOCOM test has shown that M-Lok is a more reliable and accurate system than the KeyMod. It is also worth to notice that M-Lok producing process is cheaper and allows the usage of polymer materials, which increases the highly demanded weight loss even more.