Blow Back - what does it do in airsoft guns?

While browsing various models of airsoft guns, you must have come across the concept of the Blow Back system - and more than once. This feature is responsible for giving the airsoft gun an even more realistic “feel” and reflect not only the appearance of a firearm, but also its behavior when firing a shot. Blow Back simply enhances the user experience. Some airsoft people appreciate it greatly; for others it’s an unnecessary add-on. So, let's take a closer look at the advantages and disadvantages of the Blow Back system - and how it works.

The Blow Back system - how does it work?

Blow Back is a mechanism that imitates the strong recoil of the bolt during shooting. This recoil is typical for firearms, and the use of this system in an airsoft gun increases its realism. Blow Back is mainly used in gas airsoft guns.

Each gas air gun is powered by expanding gases. Part of those gases is used by the Blow Back system, which causes the bolt to recoil by means of the bolt's valves. With each shot, the gas is expelled from the container to the barrel, and then to the piston in the airsoft gun slide, causing recoil. Firearms use a very similar mechanism, but there the gas is produced by the ignition of gunpowder. If you care about realism of your airsoft guns, pistols equipped with the Blow Back system will surely provide you with lots of that. However, ASG is not only gas airsoft guns. Does this feature also exist in equipment with different types of power sources? 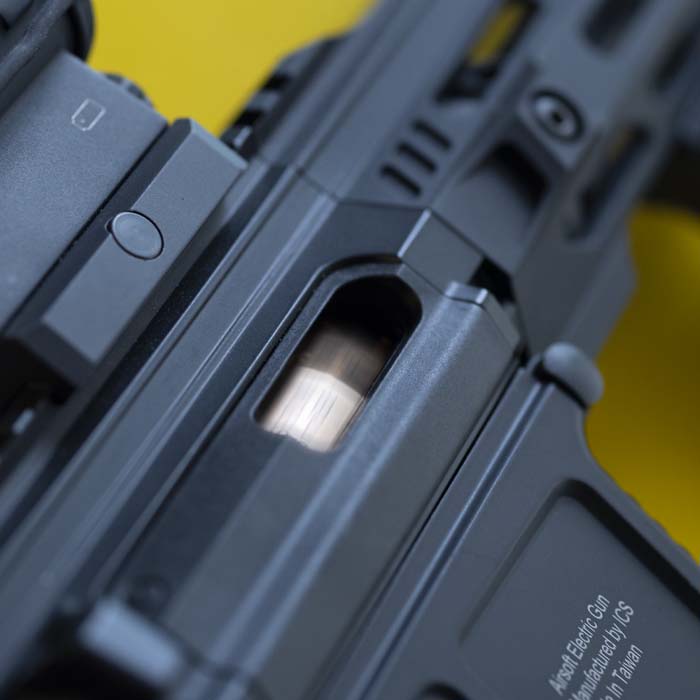 The application of the Blow Back system in ASG

Until recently, if you wanted an airsoft gun with a bolt recoil function, the only option was a gas air gun. These days, electric airsoft guns come equipped with the Electric Blow Back system, so that users of various types of airsoft rifles or airsoft submachine guns can finally enjoy this feature. The motor that powers the entire airsoft gun also allows the slide of the bolt to move, which is usually the responsibility of the shell ejector. The piston is in this case equipped with a tab, whose task is to move the ejector bolt.

In older generation EBB mechanisms, the ejector moves rigidly with the piston. The piston can stop at any point, and the ejector is sometimes left partly open. Debris can then get inside, causing the airsoft gun parts to wear out faster. The newer EBB systems are free of this drawback, thanks to equipping them with the function of loosening the piston spring, and also by installing an electric operation controller.

Blow Back and the performance and operation of the airsoft gun

Blow Back is an extra part of equipment that you can decide on, but you don't have to. It is not as useful as, for example, sights, which determine the accuracy of your shots, so choosing a BB-equipped airsoft gun is a matter of personal preferences. Strong recoil can actually lower your accuracy, if you are a less experienced shooter.

In the case of gas airsoft guns, Blow Back also increases their operating costs. This feature uses up a lot of gas, so you will probably need to refill more often. It is then very easy to fire the entire magazine capacity with one charge, exponentially increasing the costs of using your airsoft gun. It also becomes even less efficient at low temperatures. In airsoft guns equipped with the BB system, this causes the valve to become blocked more often, which results in the loss of all gas during a single shot. The above-mentioned issues related to increased exploitation obviously do not apply to electric airsoft guns.

So - Blow Back or no Blow Back?

Some players point to the advantage of the Blow Back system, which cocks the hammer in gas airsoft guns after each shot, so we don't have to do it ourselves. The trigger works faster and lighter, so we can fire shot after shot. A static airsoft gun is also certainly less thrilling and realistic. So - you have to analyze both the advantages and disadvantages of this solution, and then determine which of them prevail in your case.

The decision is definitely easier in the case of electric airsoft guns, as they do not suffer from most of the disadvantages associated with the BB system at all. This means that you get a very realistic airsoft gun, which will surely provide you with lots of thrills!

Check out a similiar entry: