Buying your first airsoft gun is definitely an emotional decision. Many beginner players do not have a large budget or do not want to spend a lot on a hobby not yet sure if they will like it. Additionally, it must be remembered that the gun itself is just the beginning. You will also need BBs, eye protection or a battery with a charger. For some time, the same answers have often appeared when asked about the replica to start. One of them is, for example, the JG638 I like. Fortunately, manufacturers are constantly trying to offer us new designs aimed at this market segment. One of them is the new Flex series from Specna Arms.

I like that different series of this manufacturer have a lot of common or similar features, which helps to find out about their potential structure, even if a new series is introduced. So, the Flex series we are discussing today is largely the younger brother of the Core series, which I am a big supporter of. The main common feature of both of these designs is that the replica bodies are made of a polymer reinforced with nylon fibres. To put it bluntly, this may not say much to the person looking for the airsoft gun. However, I can refer to my Core replica, which has gone through a lot in the last few years of use. More than once, it fell or hit walls during the game. After all, the plastic parts only have a few very superficial scratches that do not affect the function at all. Externally Flex replicas differ from Core in that their mounting rails are also made of plastic. I think it is a very good solution because it limits the weight at the front of the airsoft gun and improves its balance a bit. When it comes to durability, I would not be afraid of it. With normal use, the gun may fall from about 1.5 meters, but as it is not very heavy in itself, the energy of such a fall will not be high. You can notice that the gun bends along its axis when you put a lot of pressure on it, and that's true. However, this is not that unusual for airsoft guns made of plastic. What's more - in normal use, it is difficult for me to imagine a situation when we forcefully bend the airsoft gun to the side so that it would make it difficult, for example, to make an accurate shot. To sum up, I would not be afraid to make a gun. This is, in my opinion, one of the small compromises that we have to agree to when deciding on an airsoft gun in this budget. 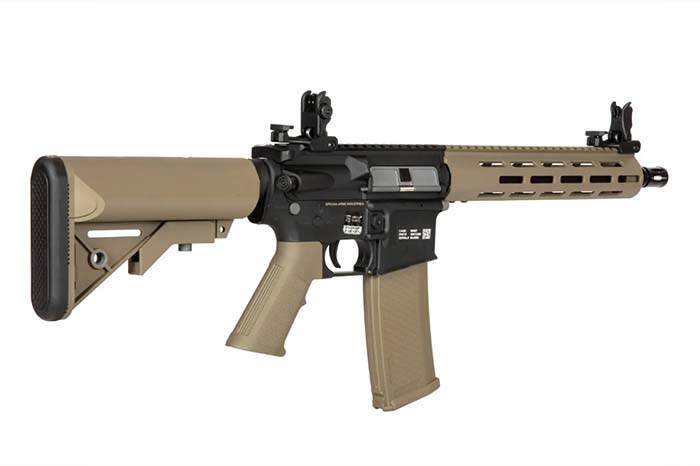 The internal structure of the Flex series replicas is, in my opinion, their greatest asset. Let's start the analysis from the front - there are brass inner barrels with a diameter of 6.03 mm. For the sake of context, I will add that a few years ago no one dreamed of finding such parts in budget airsoft guns. The guns are equipped with plastic rotary Hop-Up chambers known from the Core series. I know people who bought more expensive tuning chambers for their Specna Arms replicas and then returned to the standard ones because they worked better. 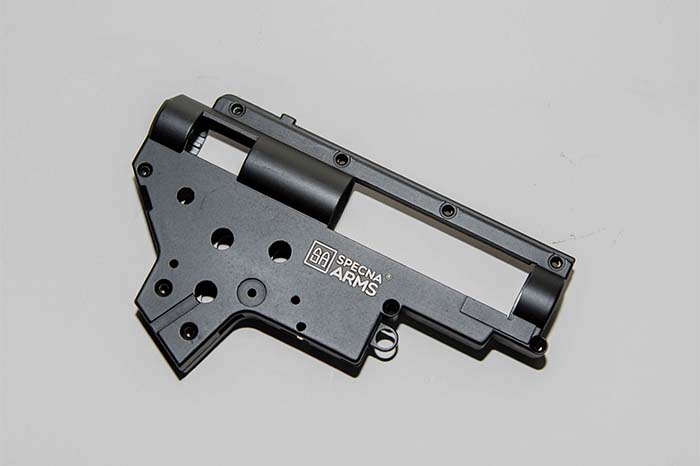 The gearbox resembles what we can find in the Core series replicas. There will be standard gears with a gear ratio of 18: 1, a piston with a polymer head with a full metal strip. The cylinder ends with a plastic head on which a plastic nozzle rests without sealing. The powertrain is a compromise between durability and price. In my opinion, the only element of the pneumatic system that would require replacement is the nozzle, but it is not necessary because the replica generates enough power without it. We may miss the MOSFET chip here, but to be honest, novice players do not need it at all. Additionally, nothing stands in the way of equipping the replica with this type of improvement over time. 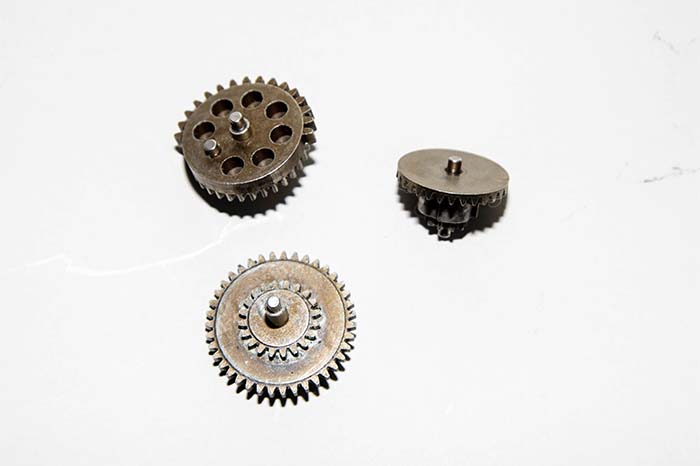 Flex and what more?

As mentioned before, purchasing an airsoft gun is just the beginning. That's why I don't like advice like "add 25EUR more and buy that". Putting myself in the position of a person who has been collecting cash for my gun for several months, I would rather have someone give me a discount code, thanks to which I can also fit safety glasses in the same budget. And it seems to me that these should be the priorities of a person buying Flex series airsoft guns. BBs, protective gear, battery and charger are the next steps. But when we get started and we like airsoft, we can plan the next steps.

The problem with budget replicas is that they often constitute an average tuning base. It is no different here. Of course, we can build a gearbox from scratch using branded components, equip the replica with an expensive hop-up chamber and a barrel. However, this will not change the fact that it is made of plastic. This is not a problem assuming that it will be a 380 fps assault rifle for us and not a sniper rifle, where details such as the stiffness of body and good body-handguard connection start to matter. I can definitely recommend a few accessories here, which we can easily transfer to a more expensive airsoft gun, when the Flex we purchased becomes a spare gun. After getting the basic equipment, I would focus my attention on red dots, handgrips and flashlights. Thanks to mounting rails, such accessories can be easily transferred to other guns. I would also not forget about a good gunbag, which will sometimes be used to carry a few airsoft guns.

Rising prices are a problem that affects many spheres of our lives. I think that in such realities we need even more ways to ease our minds like airsoft. The problem, however, is that, like any hobby, this also comes at a price. So, it's good that producers meet us and are looking for ways to lower the financial threshold for entering this sport. 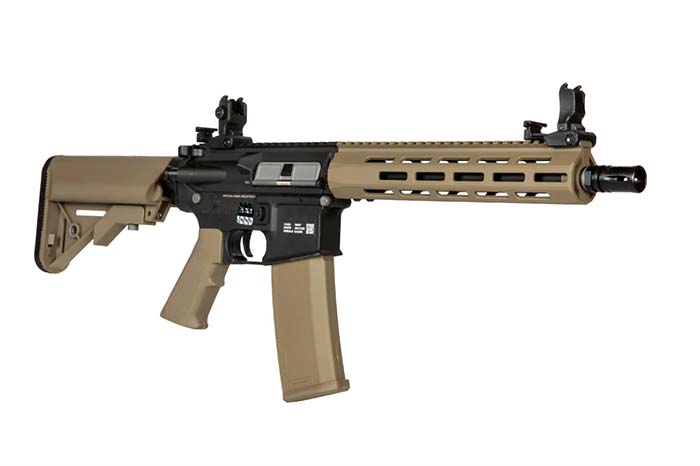 Specna Arms Flex is basically a construction very similar to the Core series airsoft guns. If I have not expressed it so far, I will emphasize it here. I think it is very good, because in my opinion the Core replicas are a very well-chosen set of components to offer us good performance at an affordable price. When you buy a Specna Arms Flex, you get a solid gearbox and a well-made body that offers sufficient durability for the price of the airsoft gun. The presented constructions also give us a very convenient quick spring change system, which, if we want to, will make our work on the replica much easier. What's more, the similarity to the more expensive Specna Arms series means that when we buy a more expensive gun, it will be easy for us to transfer the experience gained to a newer toy. I regret that when I started my adventure with airsoft, there were no such interesting offers for beginners on the market.