The choice of your first airsoft gun is associated with many decisions - and the first and most important one is to determine the type of weapon. As you know perfectly well, the airsoft market offers airsoft versions of all categories of firearms: from pistols, through machine guns and sniper rifles, to shotguns and revolvers. The electric airsoft rifle is the most frequently chosen model, because it seems to be the most universal - but is it in your case? If you think so, we will help you choose your own model - but first let's check if that’s really the case.

When and why should you choose airsoft rifles?

Airsoft guns are usually designed to reflect the appearance and behavior of real firearms as much as possible. This is why airsoft shotguns require reloading before each shot, and airsoft pistols or sniper rifles offer single fire mode only. There are, of course, exceptions to this rule, but let’s not dig into those for the purposes of simplification. The type of weapon reproduced by a given airsoft gun is related to its functionality on the battlefield. And what does it look like in the case of an airsoft rifle? 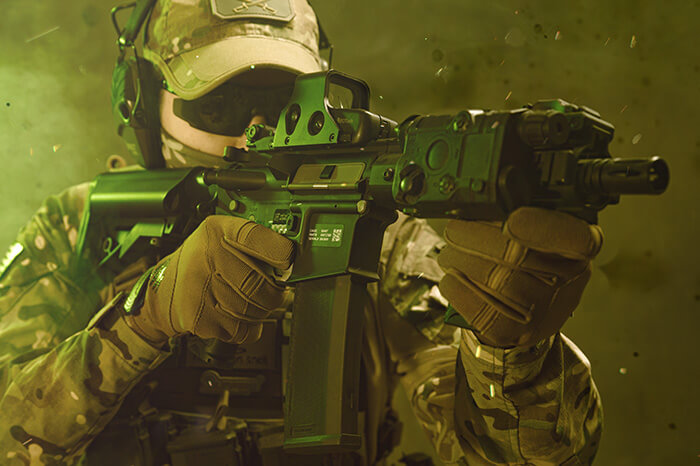 The advantage of airsoft rifles over other categories of airsoft guns

The electric assault rifle is characterized by the fact that it offers both single fire and continuous fire or burst mode. This is extremely useful and comfortable during combat, because it allows both quick actions as well as lying in wait for the opponent, and then calmly aiming and taking a shot. The situation during the game changes quickly and a smooth transition from one mode to another is very important when it comes to the tactics of a given skirmish. Such functionality is not provided, for example, by airsoft shotguns.

In turn, the longer barrel of the airsoft rifle is one of the elements allowing for more precise and longer shots. Therefore, airsoft rifles are the best for medium and longer distances. This, as well as the smoothness and comfort of use, make them the most popular type of airsoft gun - also for those at the very beginning of their airsoft adventure. If you intend to take part in competitions organized in the open field, the airsoft rifle will prove to be your best friend!

If you already know that the airsoft rifle is the way to go at the beginning of your adventure with airsoft, all you have to decide is the class of your rifle. An airsoft assault rifle is not only more versatile than an airsoft sniper rifle, but also easier to use - and often cheaper as well.

Airsoft sniper rifles are usually chosen by more advanced players who have already tried and proven themselves in various roles. They know that they have the right predispositions and want to specialize in shooting at long distances. Using this type of airsoft gun requires more skill, as well as additional accessories - such as telescope and bipod, which increase the cost of the entire set of gear. You also probably won’t get a chance to run around with a sniper rifle during a fight, and you definitely can’t pepper your opponent with a hail of BBs. It is a piece of equipment for very specific purposes that often lacks the functionality of other types of weapons.

So, if you are just starting your airsoft adventure, we strongly recommend you to choose the airsoft assault rifle. You can test your skills in games with different scenarios and figure out your ideal role in a team. 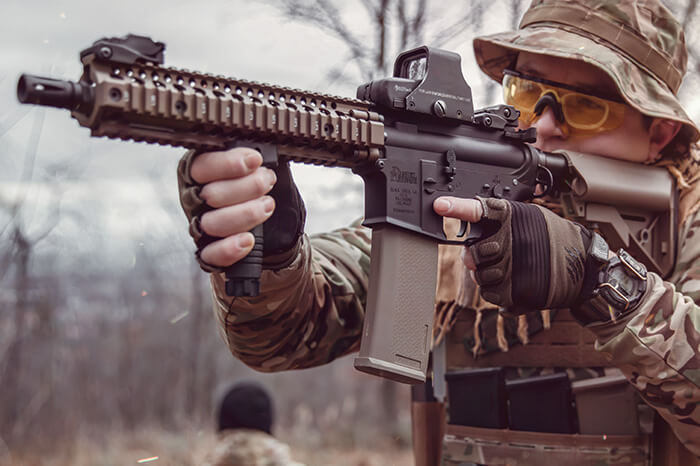 Airsoft assault rifles are usually electric-powered models. Gas or spring versions are rarely found - and this is completely understandable. Gas is not resistant to low temperatures and, depending on weather conditions, it performs better or worse. Along with the loss of gas during shooting, each subsequent attempt may also display less spectacular parameters. This means worse repeatability, and we want each subsequent shot to be as good as the previous one, or even better.

In turn, the airsoft spring rifle must be reloaded before each shot, which prevents smooth play and increases the risk of failure. It’s no wonder than that the electric assault rifle is the most frequently chosen model - both by beginners and experienced players.

We have already established that, at the very beginning of airsoft adventure, it is best to choose electric airsoft rifles - but remember that there’s a whole plethora of very different models. They not only have different parameters, but can also be equipped with various useful functions and elements. The more of those, the more expensive the airsoft rifle - so what will you need to begin with?

It is definitely not worth investing in the cheapest equipment, but allocating your maximum budget for this purpose, the amount of which, of course, depends on individual arrangements. You can have a pretty good airsoft carbine, that you will enjoy using, for as little as PLN 500-600. This is a minimum amount to spend - it’s really not worth it to go cheaper. Adding twice that much, you will get equipment that even experienced players would not be ashamed of. So, what parameters should it have?

Muzzle velocity at the level of 350-400 FPS will be useful at medium distances, and will also allow you to take part in CQB battles. It is also worth considering the choice of a model that allows you to use a stronger spring, as this way you can increase the muzzle velocity of your airsoft rifle, and thus the effectiveness of shooting at longer distances. 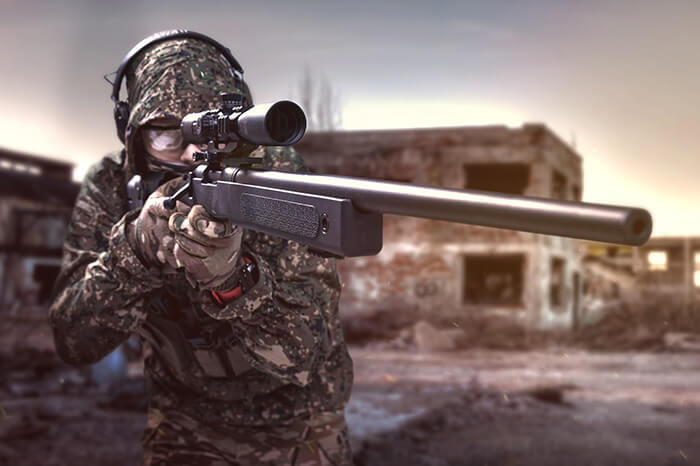 What else should an airsoft rifle be characterized by?

Quality of workmanship is another important issue. A better fitted weapon will work much smoother than a poorly manufactured one. If the components are reinforced and the whole is made of high-quality materials, then such equipment can be used more often - without the risk of damage or failure. So, pay attention to how precise the individual elements of the airsoft rifle are made - do they look strong and durable?

Airsoft manufacturers are outdoing each other in inventing improvements and innovations, thanks to which the use of airsoft guns is to be more comfortable and provide even more fun. However, not all of them will be needed at the very beginning, and even later it’s still worth it to consider their usefulness - in our specific case. After all, each player has different requirements, which result from the approach to airsoft. For some, it is an essential part of life, for others - just a weekend pastime.

The former will probably make full use of the capabilities of systems such as MOSFET or ETU, but if you only intend to use your airsoft gun from time to time, you may not necessarily need all the bells and whistles. The electric Blow Back system enhances the shooting experience, but at the same time has a negative impact on the results. So, it is not a useful function for a beginner.

However, it is good to consider an airsoft rifle model that has a quick spring change system. Not only because it allows to efficiently replace the spring even during a game, but also because it does not require disassembly of the airsoft gun - a skill which must requires some learning. The adjustable Hop-Up system will be useful, in turn, to increase the parameters of the airsoft rifle. 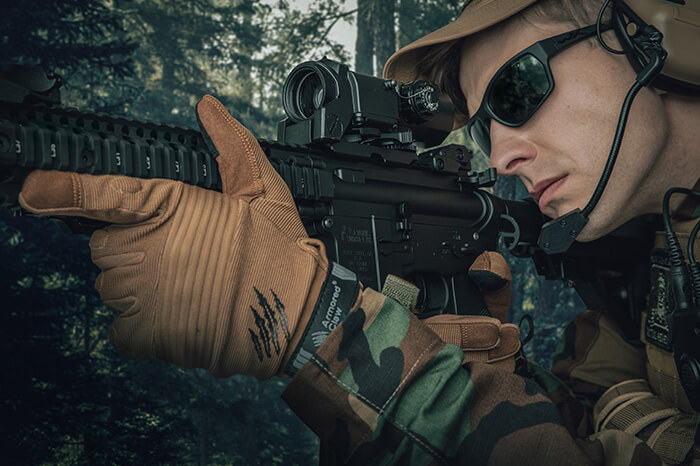 The airsoft gun is the most important piece of equipment in airsoft, but the accessories are equally important, on which its operation may also depend. Electric carbines are often sold in sets with a charger and rechargeable battery, but they are not always of good quality in case of cheaper models. So, it may turn out that you’ll will have to buy new ones.

You absolutely must have good-quality eye protection, i.e. safety sunglasses or goggles. After the first few games, you will surely find out that it is worth investing in knee pads that will allow you to comfortably lie in wait for your opponent. Other accessories, such as optics, equipment or uniforms, are not necessary at the very beginning. You’ll have as much fun without those and enrich your airsoft gear with additional equipment in time - as you become more and more involved.

What else do you need to know when choosing a BB rifle?

Finally, it is worth adding that the airsoft rifle should have dimensions adapted to the physical parameters of the shooter. It should lie securely in your hand, which means it shouldn't be too heavy or too big. Currently, the needs of all users are very much cared for, so more and more often we can come upon, for example, models adapted to left-handed players. Thanks to this, everyone can choose the right equipment for themselves.

You still have to choose a brand and a specific model. Here, it is worth reading the opinions of other users, consulting with more experienced employees of the airsoft shop, and reading our other tips.