What an airsoft sniper needs?

How to choose gear for airsoft sniping?

It is certain that there is no one universal solution for equipment for everyone. And there is nothing wrong with that. Each of us has different preferences or conditions that affect the types of tactical vests we choose. Some will support chest rigs; others will prefer a plate carrier. However, I have the impression that in the case of airsoft sniper rifles, many people can take advantage of the solution I propose, which are the harness with belt. I noticed that when I act as a sharpshooter on my team, I often have to stop in one place, usually in a prone position. With a belt on the harness the front of my body is not obstructed by gear. Lying down, we have access to our pouches and we do not expose ourselves to contamination of the equipment with soil.

As an airsoft sniper, we have slightly different needs when it comes to the equipment we carry. We'll mention this a bit later, but it's worth mentioning at this point that we will usually carry a little less. First of all, we will need less ammunition. Sniper rifles use smaller magazines, the same is true for side replicas. For this reason, more space for pouches offered by vests is simply unnecessary. In addition, if we invest in viper hoods, it will be easy to integrate them without a carrying system on the shoulders and back, as is the case with chest rigs or plate carriers.

As I mentioned above, my proposition for an airsoft sniper is a harness. These types of load-bearing structures can be purchased for few euros, which in my opinion makes them a very good proposition. Let's not forget that often the sniper gear will be our second gear set, so lower costs will be most appreciated. It was very important for me when completing this equipment with which side replica I will operate. I decided to use a replica of the AAP-01 pistol with my SA-S02 sniper rifle for the most part. Therefore, the first element on the belt will be the Primal Gear Compact II holster, which will help you carry it. The holster itself is mounted on a Molle adapter. 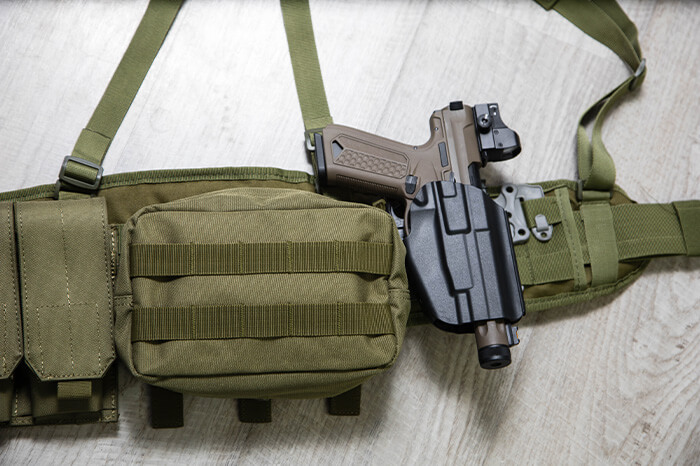 Then it's time for ammo pouches. I decided on a set of two double pouches. Closer to the belt buckle are pistol pouches for AAP-01 magazines, and right behind them are pockets for carrying M4 standard magazines, closed with a flap. In my experience, they can easily accommodate additional sniper magazines. I chose pouches with Velcro flaps. It was difficult for me to estimate whether the open pouches would have enough strength to hold the magazines. In addition, I decided not to carry the dump bag in this set, so I have to hide empty containers in pouches. Of course, this solution also minimizes the risk of contamination of the magazines while lying on the ground. 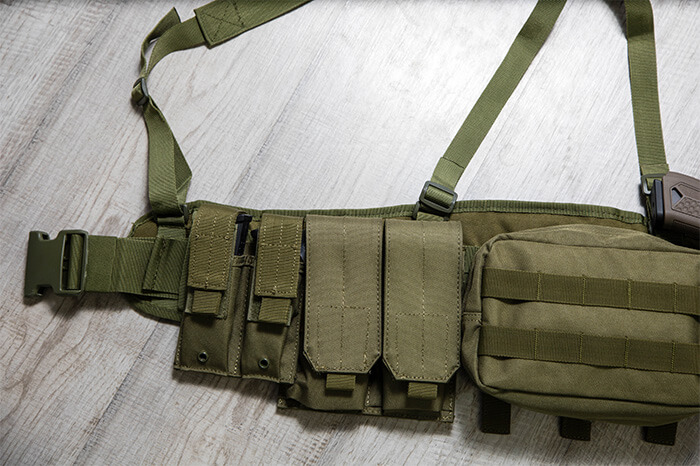 The last element on the belt is a cargo pouch. I chose a horizontal model that opens with a wide zipper. Thanks to this, I have easy access to the equipment, even from the back, and the pouch itself should not hang around as much when moving as more vertical structures.

What to carry in our pouches?

It seems to me that the biggest difference in what an airsoft sharpshooter carries compared to an assault-oriented player is in the magazines and ammunition. When shooting a sniper replica, we will use much less BBs for several reasons. First of all, the rate of fire of sniper replicas is much lower. Usually they are spring driven, so for each show we have to pretension the spring. In addition, magazines usually have a smaller capacity. For example, those used in my SA-S02 can hold 20 BBs, while the mid-caps will be used to carry even about 120 or even 200 BBs. Also, let's not forget that heavy sniper BBs are much more expensive. Maybe not everyone has it, but for me it is triggered by the desire to save them. In addition, our airsoft pistol also usually have smaller magazines than those used in AEGs. 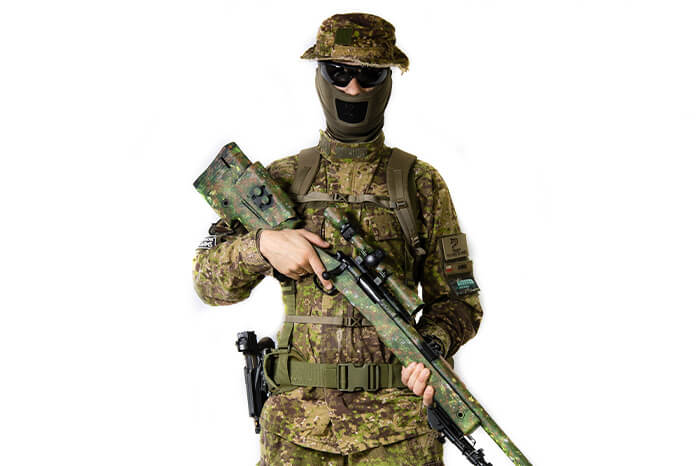 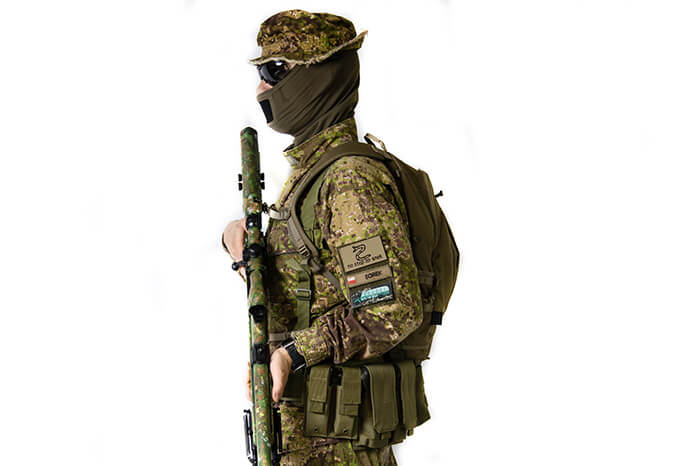 Using a spring airsoft gun usually doesn't require so many additional accessories from us. If we tension the spring with the strength of our own muscles, we do not need spare batteries to power the airsoft gun. Additionally, we do not rely on red-dots, which also require a power source. It is rather rare that we need a backlight in a sniper scope, not to mention the fact that many of them do not offer such a function at all. This eliminates the need to carry extra batteries. We also equip assault replicas more often with attached accessories, such as flashlights or even grenade launchers. This in sniper rifles is rather unusual and also reduces the additional ballast. In fact, we only need magazines, small packs of BBs for the main and side replicas, basic tools (for example, included with the replica) and maybe green gas if we have a GBB pistol. The rest of the equipment is the same as what is generally worth taking for a game - it will be water, some food and a basic first aid kit. Thanks to this, while playing as an airsoft sniper, we will maintain lightness and unrestricted movements that will help us in approaching enemies. 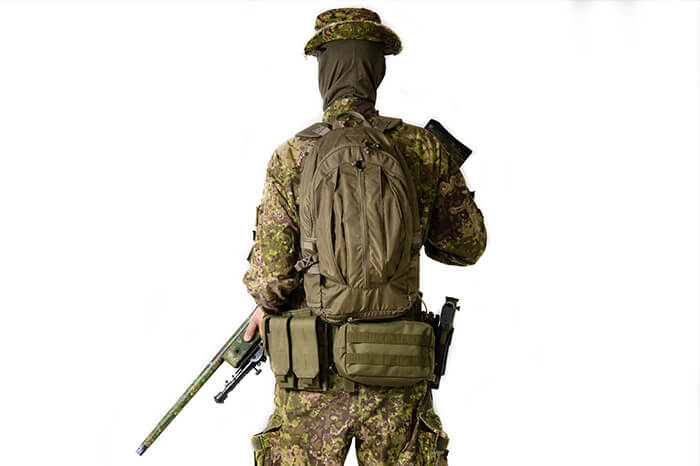 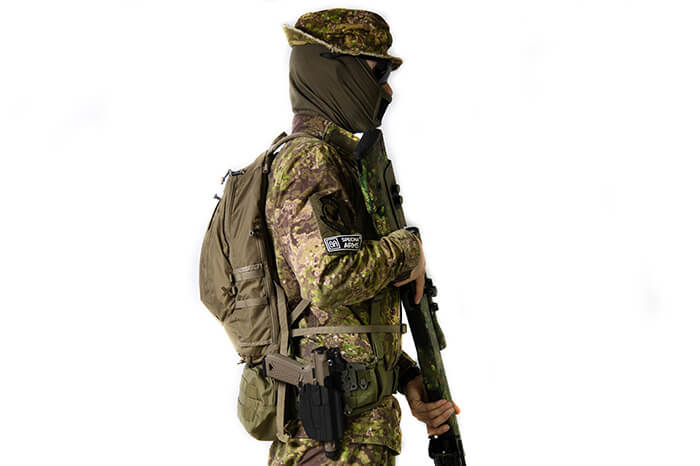 Let me know what you think about my proposed basic airsoft sniper equipment. If you are interested in how the set presented in this article works, I encourage you to follow my profile on Instagram, where there will certainly be photos and reports from shooters on which I used it soon.