Action Army is a company that has so far been known for the production of parts and accessories for airsoft replicas. However, last year they launched a green gas powered ASG pistol - the AAP01 Assassin. Since then, the design has gained many supporters and it can be said that it was a market success. On the Web, you can find various types of groups associating the owners of these replicas. 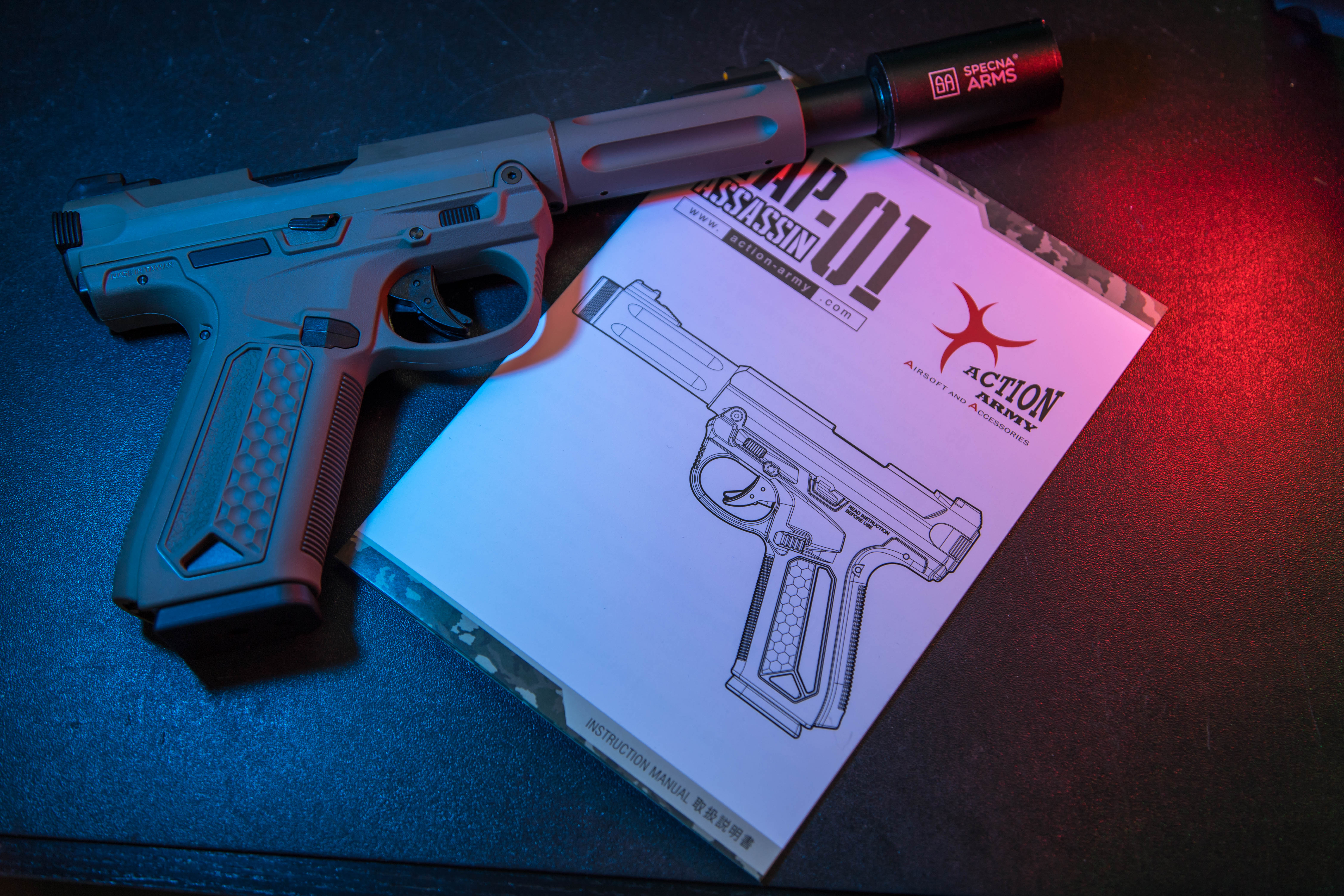 Many stores offer accessories dedicated to the Action Army pistol. Among them there are those that can be expected, such as enlarged magazines or rails enabling the installation of additional sights or flashlights. But we will also find those that will make our ASG pistol similar to a drill or change it into a small carbine or a submachine gun. This type of modularity or the possibility of personalization made me decide to check how this design works in reality. 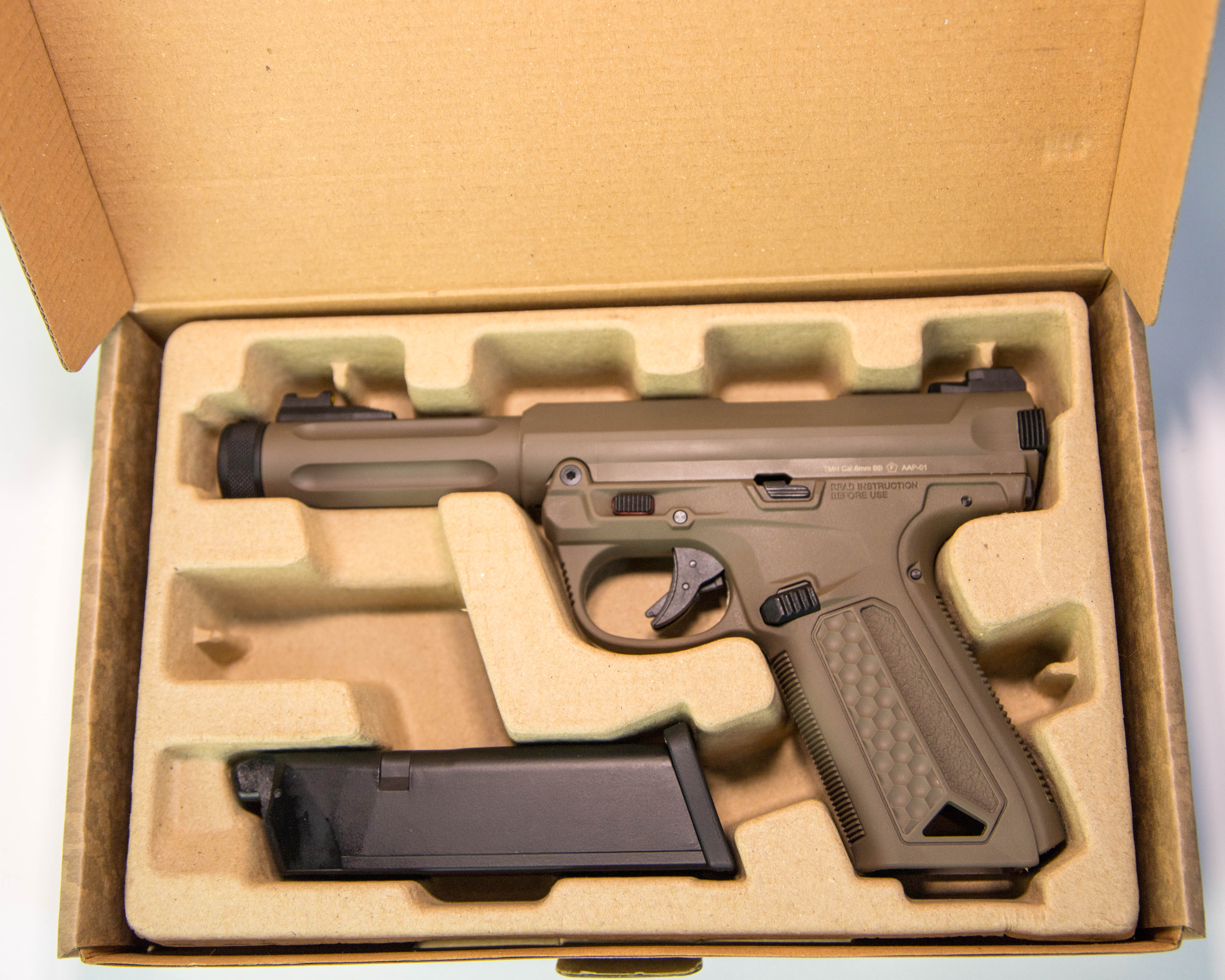 Action Army AAP01 is a replica made mostly of plastic. The elements of the internal mechanism are mainly metal. The frame, barrel and bolt assembly are polymers that make a very good impression. The rail cover and grip has a nice structure with all sorts of elements whose texture is intended to improve the feel of the gun. The trigger is itself a safety feature and only its proper, correct press allows you to shoot. In addition, we also have a dedicated button that blocks the operation of the trigger, which is the second stage of security. 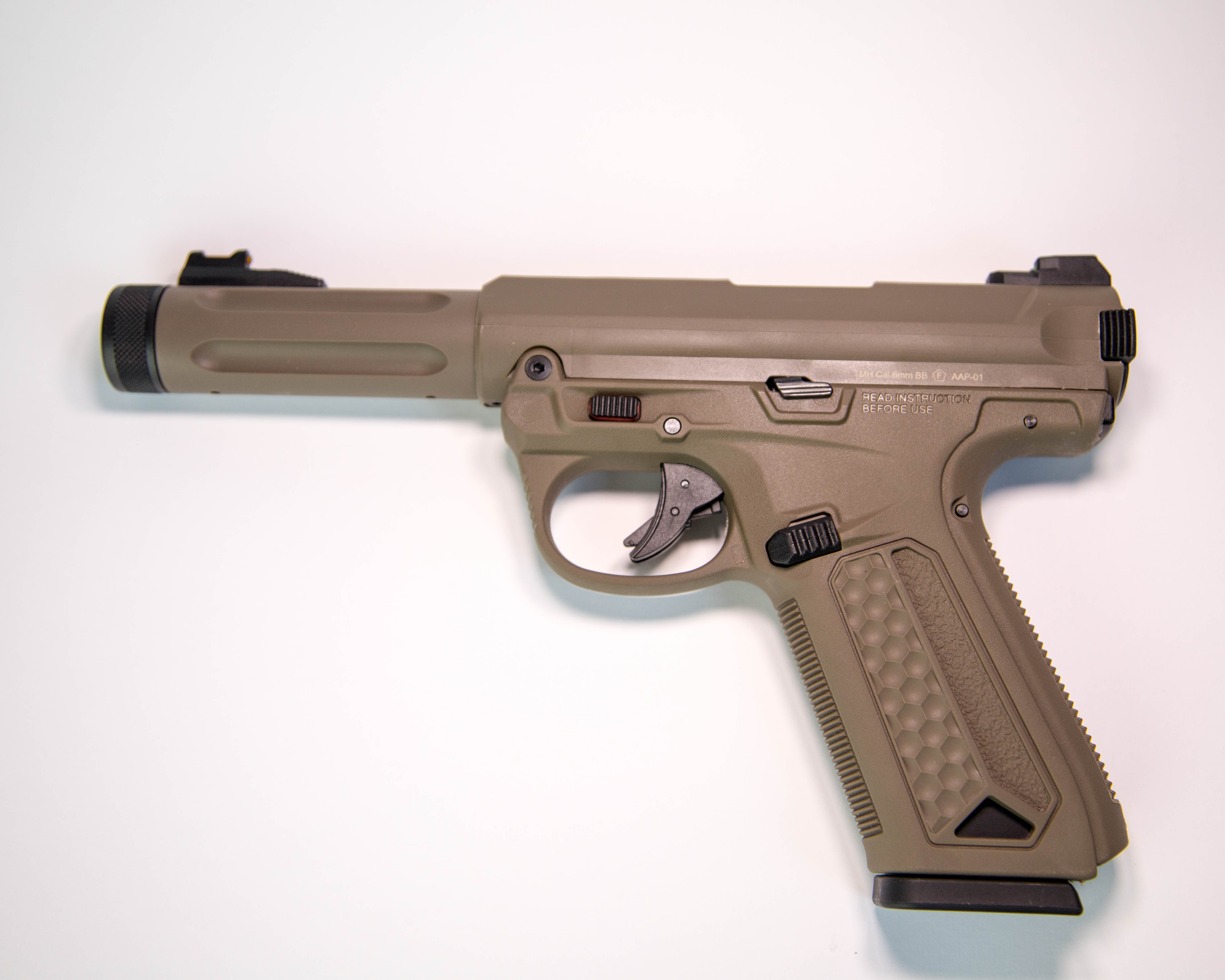 The barrel, unlike other designs of green gas or CO2 pistols, does not move together with the slide when the shot is fired. This is a very interesting design solution that allows you to mount optical sights without any worries that vibrations during the blowback system operation will spoil the re-zeroing of the sight. This solution is also to improve the accuracy of the replica due to the fact that the permanently mounted barrel has less possibilities of changing the alignment of the replica.

In the upper part of the Action Army gas pistol barrel, we find a set of very well-made contrasting sights. At its end, a cover is installed as standard, under which a well-known fourteen-millimetre left-hand thread is hidden, thanks to which we can equip our ASG gun with a silencer or a tracer. The magazine and bolt release are located similarly to the Glock style pistols. Their operation is correct in my opinion. Particularly noteworthy is the magazine release button, which has a pleasant texture. It protrudes a little, making it easy to locate, but not high enough to be in the way or to be pressed in by accident.

The construction of the Action Army AAP01 Assassin is, in my opinion, very well thought out. It may bother some that this is not a reflection of any real firearm design. But you can definitely pay attention to the high quality of the materials used in the production. Even after a few weeks of testing, the replica shows no signs of use such as abrasions or scratches. 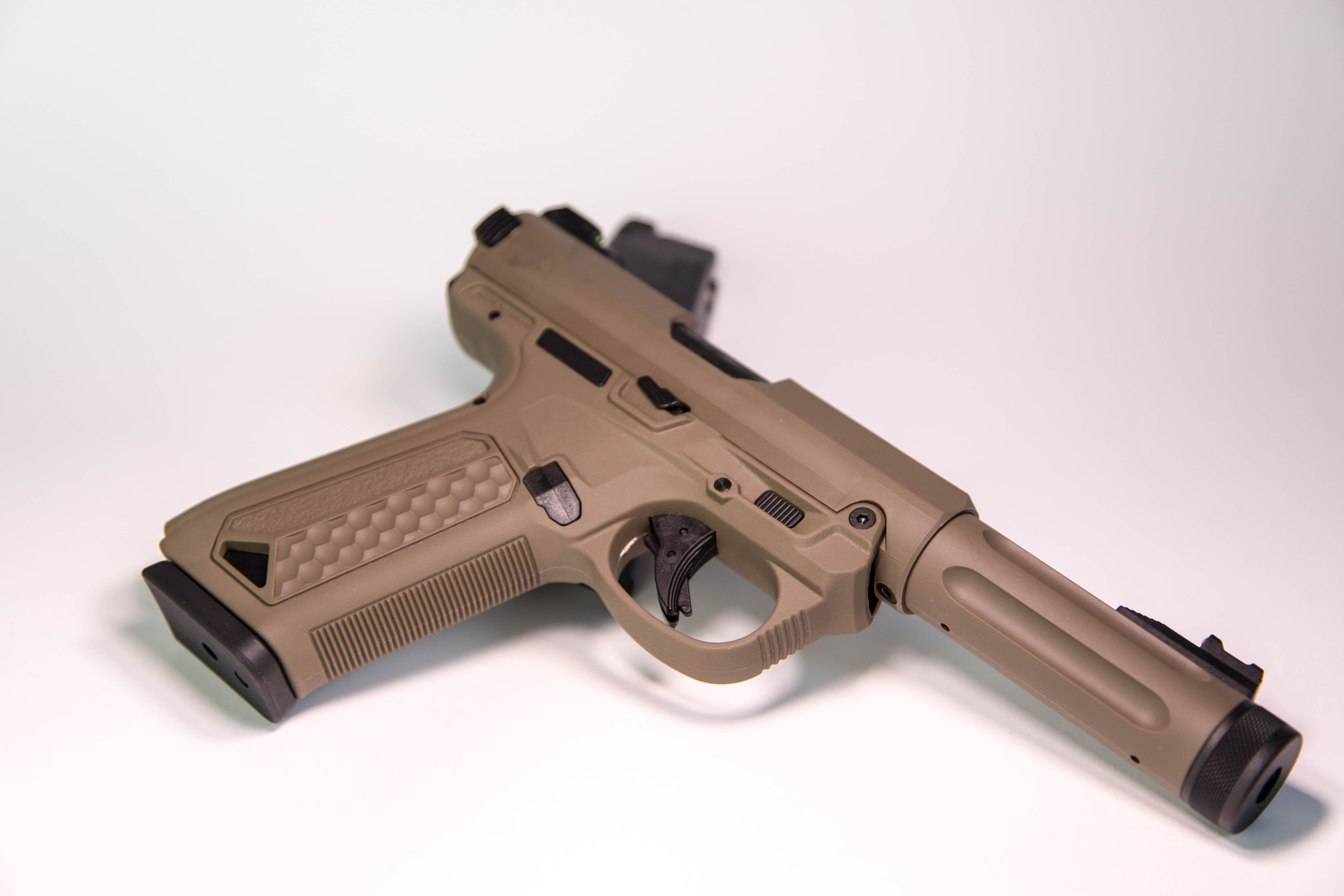 The first thing I would like to emphasize about the handling of the AAP01 Assassin is the fact that it can be completely adapted to be operated by both right-handed and left-handed people. Manipulators such as a lock release or a lock button can be easily moved to the other side. Even the magazine that we get with the replica has cut-outs on both sides, so there is no problem with moving its release button to the other side of the replica.

As already mentioned, the barrel of the Action Army replica remains in place and only the lock on the back of the green gas pistol is responsible for the operation of the blowback system. There are handles on both sides of it, the task of which is to facilitate reloading of the replica. After pulling back the bolt, in its lower part you will also find a selector, which in the versions with continuous fire allows you to switch the fire mode. 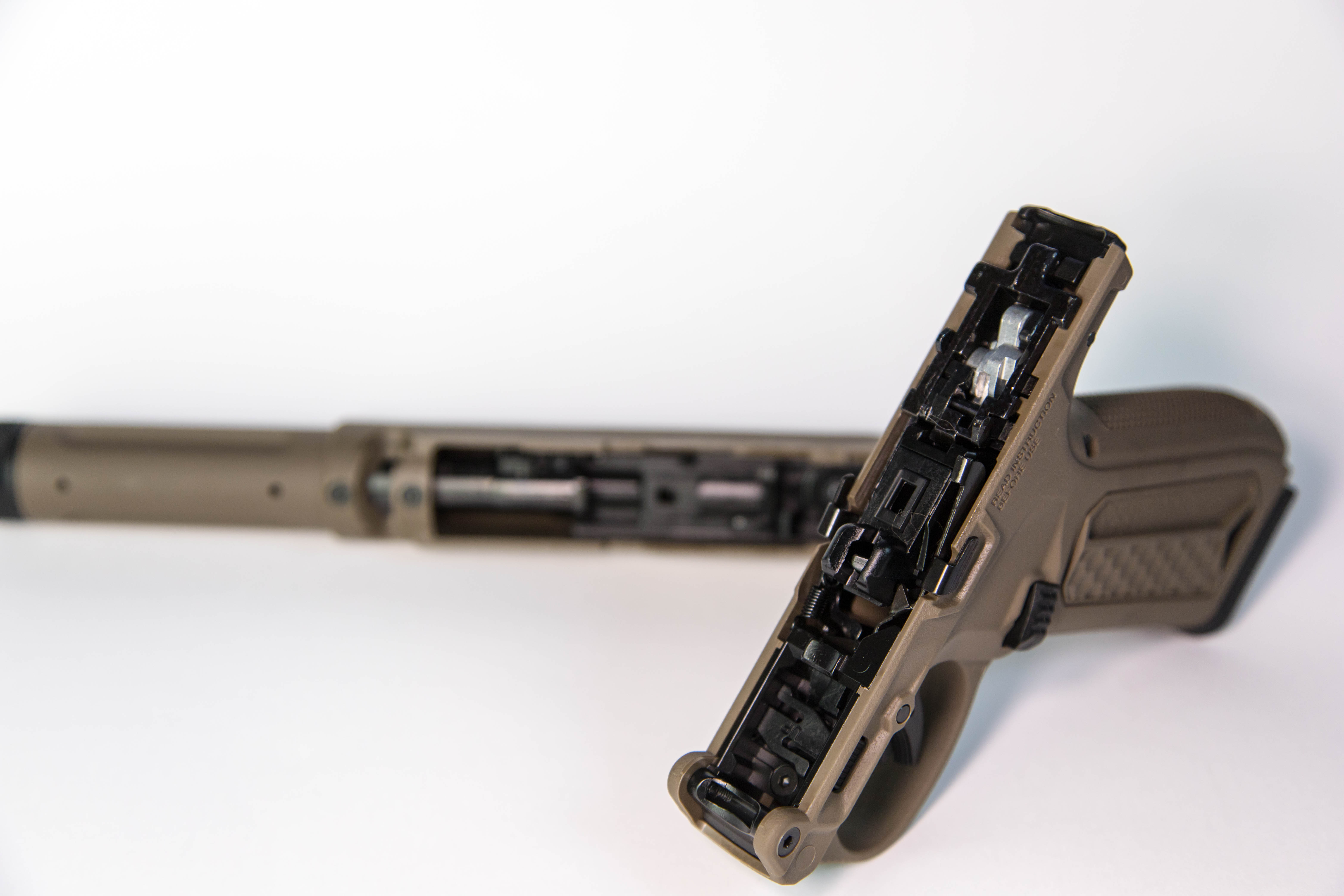 The pistol replica is accurate, consumes relatively little gas and has good performance. In my tests, using the magazine added to the replica, 0.2g Specna Arms Core BBs and WE Green Gas BBs, I managed to achieve about 327fps, i.e. 1.24J. Usually filling the magazine fully with gas is enough to fire a full row of BBs twice without the need to top up the gas. An interesting solution is also the possibility of adjusting the Hop-Up system without having to disassemble the replica. Through the hole imitating the shell ejector, we have access to the knob responsible for the adjustment. Just pull the lock back and you can make corrections. In my tests, the replica also worked well with magazines for Glock replicas from WE, and according to the information I found on the Internet, it should also work with designs from other manufacturers. 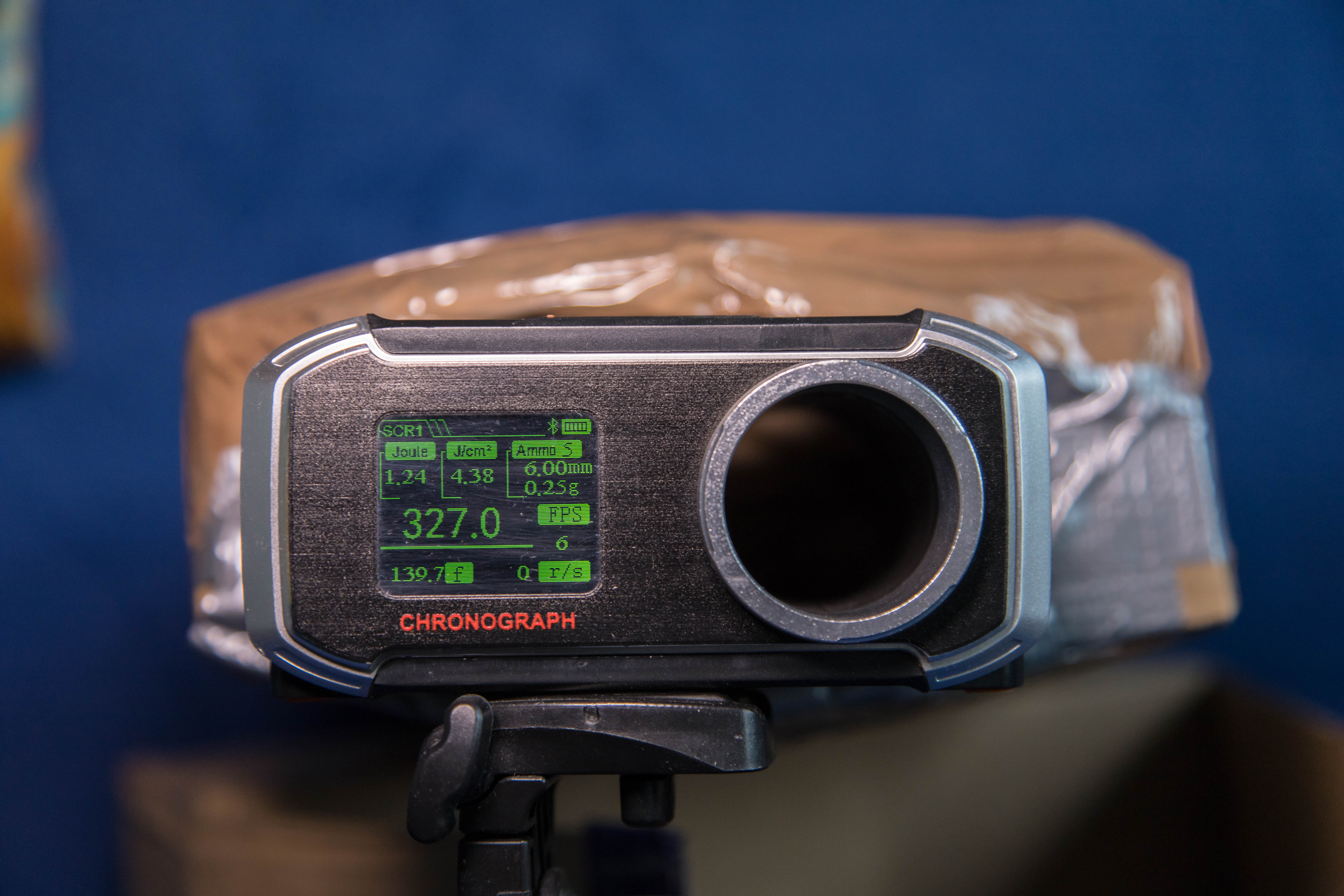 I was wondering where the popularity of the AAP01 replica came from. This gas gun seems to be one of the most successful models in the market for several years. After I was able to test its possibilities myself, my doubts were dispelled. It is a well-thought-out design, which in addition is not overpriced. At a price at least comparable to competing replicas from manufacturers such as WE or KJW, we have a gun that accepts standard magazines, offers the option of continuous and single fire, does not have an excessive appetite for gas and offers stable performance straight from the box. Additionally, the AAP01 is actually a white canvas, an open tab that begs for all sorts of modifications.

The replica comes to us in a rather raw form as a standard, but with a bit of imagination it can be easily changed. On the one hand, we can playfully make our gas gun similar to a cordless screwdriver, but on the other hand, we can make it more practical with the help of a rifle conversion. These are just some of the possible improvements. On the market, we can find various additional mounting rails or elements such as additional trigger tongues. Due to the multitude of different personification options, we do not have to worry that the popularity of the AAP01 will mean that we will find a dozen of the same pistols in the shooter. All you need is a few more trinkets and we have a one-of-a-kind gas gun. I have definitely joined the group of fans of this design and I can't wait until higher temperatures will allow me to play another successful game with the AAP01 Assassin replica.