Dye masks - why is it so popular and why should you use them?

I will not forget the feeling of consternation I got when I started watching airsoft movies on the Internet made in the United States. I got the impression that everyone who play there wears a paintball mask. Much of these masks were very similar to each other. They differed in colour and type of the visor, but the shape was the same. Today I know two things. The first is that they shoot with less powerful replicas than in Poland and at shorter distances, and shoots at every part of the body, including the head, are not uncommon there. I also know that the masks that made such an impression on me are the Dye Precision products. I finally got one of these face shields and I have to admit that it made a very positive impression on me, so much so that I consider using it as my main face shield on all games, not just in buildings and speedsoft arenas.

Airsoft has many names

Sometimes, while browsing various internet groups associating airsoft players, you can come across negative opinions about users of paintball masks in our hobby. I think it comes mainly from the fact that they are associated with a speedsoft, which evokes quite extreme emotions. Fortunately, I see that this part of the community is also growing. I myself think that there is a place in the world for every branch of airsoft and the diversity will only help us.

While I do not have a major problem to minimize face protection during games in the forest, I cannot imagine it during games at closer distances. One can argue both ways here. We can say that in CQB the airsoft guns are weaker and more often played "semi only". Conversely, in the forest, replicas are much more powerful and you can fire automatic fire. Therefore, in the end, I think that everyone should judge it for themselves and choose the forms of protection to suit their requirements and comfort level. There is no doubt, however, that the terrain in which we play our skirmishes has a big impact on what we will use to minimize the risk of injury.

Among stalker masks, balaclavas, scarves, helmets and other types of shields, I trust paintball masks the most. To a large extent, it appeals to me that they constitute a solid barrier for the BBs, which covers a large part of the head practically from one ear to the other. However, the fact that they can spoil the realism of the game cannot be avoided. If we keep this in mind, we may be reluctant to use such forms of protection.

What's in the box? 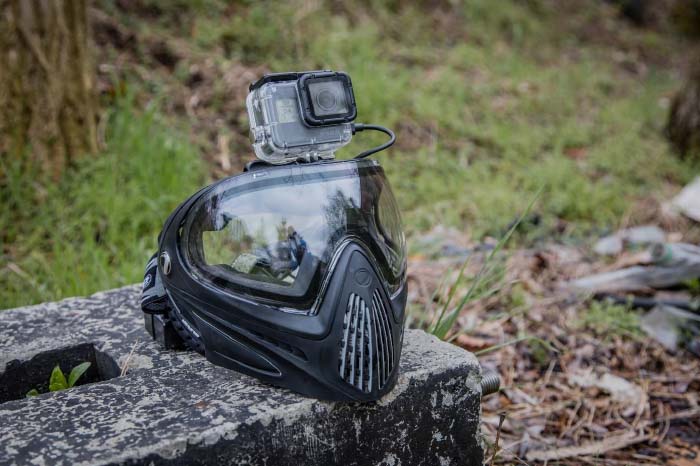 The Dye i4 mask comes to us in a box with a large window. This form of product display makes a lot of sense if we remember that the masks in question are made in a really large number of different colours and patterns. It is not difficult for me to imagine that in a stationary store, multi-coloured masks arranged in an interesting way would make a very positive impression. After opening the package, you will see the mask itself and a large amount of paperwork. This will be the instruction manual and documentation for the mask. There is also a sticker with the manufacturer's logo and a canvas bag in which we can safely carry the mask. Everything on the bottom of the box is secured with a sponge with a notch that stabilizes the face shield in place.

The visor itself in my copy was immediately installed in its place and additionally had a protective foil on it, which can be satisfactorily peeled off in one slow motion. The design of the mask and the way it is delivered gives the impression of a high-quality product. I did not notice any trimmings, sharp, unfinished edges or other imperfections on it. The main material used in the manufacture of the mask is quite soft plastic. It has a lot of small vents that seem cut in such a way as to facilitate the outflow of hot air from inside. A sponge is placed around the visor, which is a barrier between the skin of the face and the lens itself. In addition, in the place where we find the cover of the ears and the skin near them, the material changes into a quite soft synthetic fabric, which is sewn into the plastic part of the mask and additionally held with Velcro. The rear strap, which mainly holds the hood in place, is wide and soft. It has a fairly solid length adjustment system and, importantly, it does not cause discomfort with prolonged use.

Impressions of the game in the Dye i4 mask 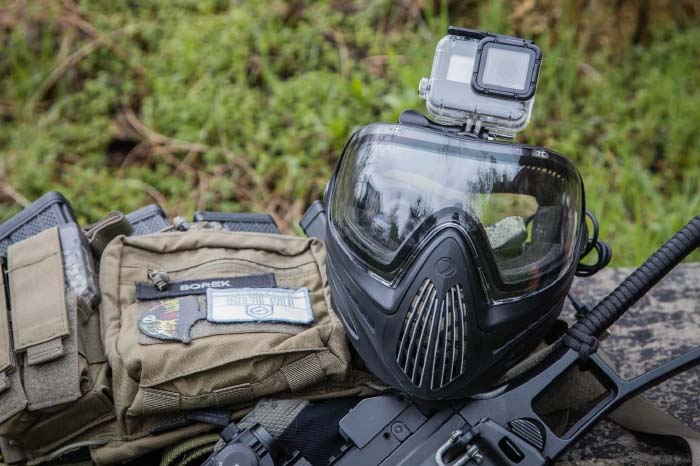 Having a good quality face shield makes me feel more confident during airsoft games. So, I'm not surprised that I got to like the Dye mask very quickly. First of all, it covers the entire face and reaches up to the ears, so in most cases, when during the game at close distances we lean out from behind the cover and receive a shot, it lands on the mask, which thus proves how well it fulfils its role. Dye i4, unlike the mask I used before, is built in such a way that it is less difficult to arrange the shooting position. Thanks to this, there is practically no need to use cumbersome rails to increase the assembly of the red dot on our airsoft gun. This is of great importance especially for those with sights that do not have a large range of vertical adjustment.

In my opinion, it is particularly noteworthy that despite the intense heat and sweat, the mask never caused any problems for it to evaporate. I must admit that the moisture settles on the inside and sometimes it can be a lot of it, but the visor itself in my case did not cause a problem at all. It remained transparent all the time. The only dirt it suffered from was the kind that forms at the outside of the mask. It can be easily wiped with a glove or a cloth and you can still enjoy uninterrupted visibility.

However, I did have minor problems with using the Dye mask. First of all, the belt adjustment system that holds the hood in place is quite difficult to operate. I had to pay a lot of attention to finally find out how it is regulated. Here, however, it can be argued that it is designed to prevent accidental displacement of the mask. Another thing is the way the mask visor is removed. I must admit that the instructions added to the product do not clearly explain how to do this. Only after checking the film found on the Internet, I was able to figure out how to remove the glass. Considering the fact that players often have several visors with varying degrees of light transmission, and the manufacturer himself seems to promote this approach, it is difficult for me to understand why a little more attention was not paid to the preparation of a clearer instruction. 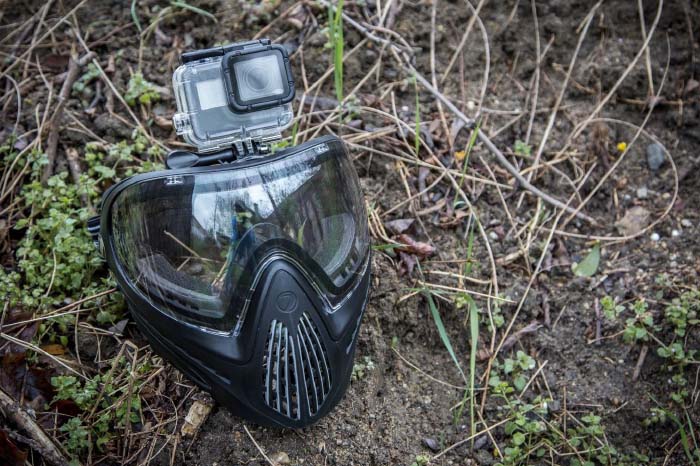 I will not hide that initially, when I started attending speedsoft games, I was surprised by the fact that the vast majority of players use Dye masks. After trying to explore the topic by searching for information on the Internet, I only confirmed this belief. However, after having had the opportunity to try the Dye i4 mask myself, I have no further doubts. It is a product that not only fulfils its basic function well, which is to protect our face against gunshots during shooters, but also offers good ventilation that prevents fogging of the lens built into the mask. The design of the mask makes it convenient to use even with relatively low red dot scopes. If you are looking for a good quality mask for CQB or Speedsoft games, it is definitely worth considering Dye products.