ICS is a brand that has accustomed us to high-quality products and innovative solutions, both in the field of AEG replicas and gas pistols. Each of their models was better than the previous one, but with the Challenger they showed what they can do. This time the innovation did not appear in the design of the gun, because here they decided to work on a proven and very popular platform, which is the popular Hi-Capa and here, what is important, it is the TM standard, innovation appeared in the implementation of proven solutions from the modding sfere to the factory-made pistol and performance on very heavy bb’s, more about this later in the review, and let's start with the contents of the box. 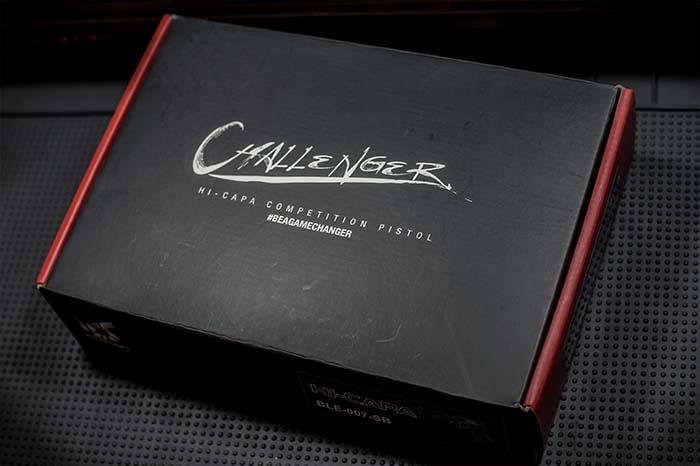 The airsoft gun is packed in an elegant red and black box with a large Challenger inscription on the front, and inside we will find: 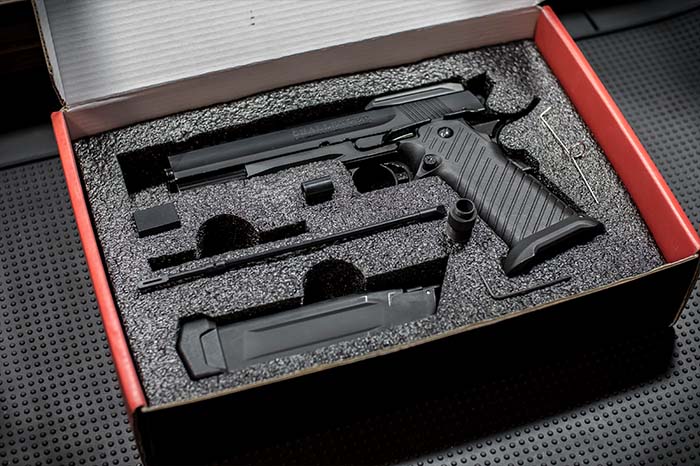 The airsoft gun measures 220mm and weighs almost a kilogram, externally it is made of good quality polymer from which the grip is made, aluminum from which the slide and frame are made, small parts are made of zinc-aluminum and steel.

All external parts are painted black, but they are distinguished by the way of finishing, the elements are matte, semi-matte and even glossy, which makes the gun despite being in one color not boring and eye-catching. 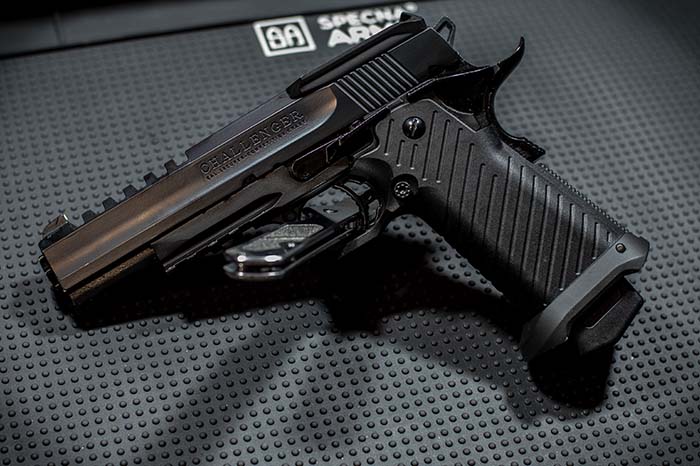 The aluminum slide has clear indentations in the front part showing us a shiny outer barrel. In the rear part you will find a plate that allows you to mount a red-dot in the RMR Standard, we also will find glowing in the dark sights. If we would like to unninstall the plate and put on a classic rear sight, we get a cover together with the airsoft gun.

The outer barrel ends with an 11mm counter clockwise thread, thanks to which together with the adapter in the set we can mount for example a tracer unit. 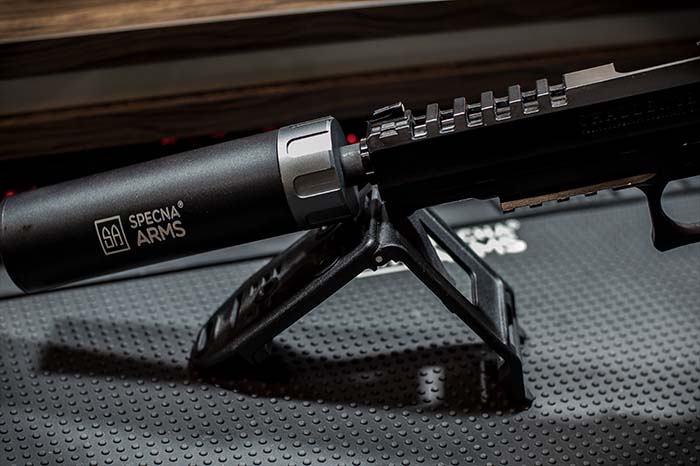 Under the barrel we will find a short section of RIS rail which will allows us to mount a flashlight. 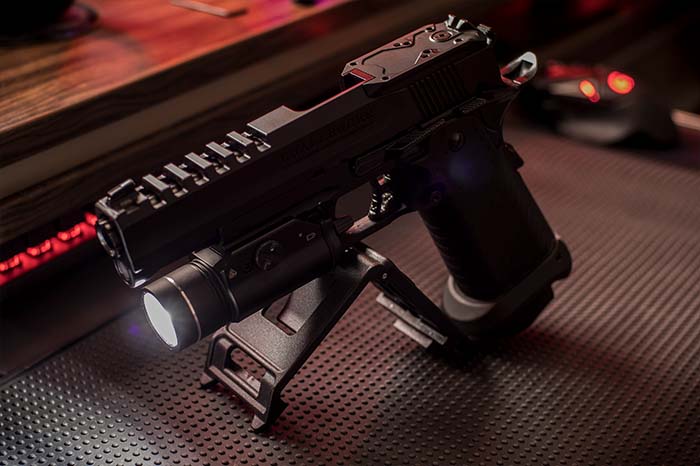 The grip has a very simple design and is quite smooth, but the pistol still sits quite firmly in the hand. The magazine well is ended with an enlarged aluminum magwell, which makes changing magazines easier. 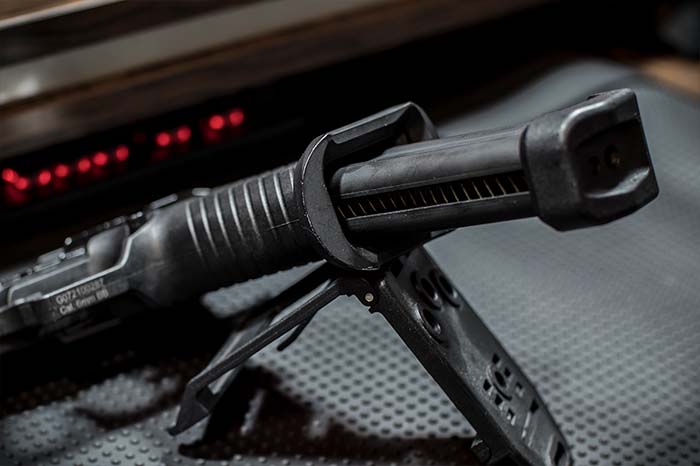 Externally we will find two first steel elements, which will be the slide return spring guide and the hammer.

It is also worth mentioning the trigger with over-travel regulation that is how far back the trigger is to move after firing a shot, shortening this path allows for a slightly faster reset and thus firing shots. 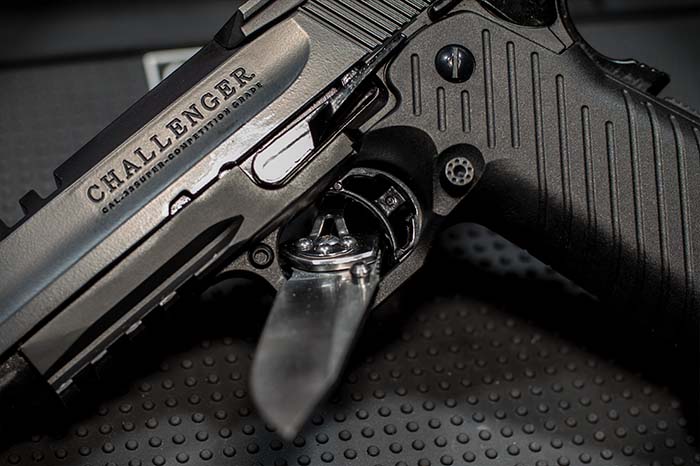 From the outside, the airsoft gun offers an interesting design and what is more important is what's inside.

The metal magazine holds 30 BBs. It has a large magazine plate that should cushion its fall in the event of a quick magazine change, and has REVO valves installed, which ensure efficient work and allows for greater gas loading. 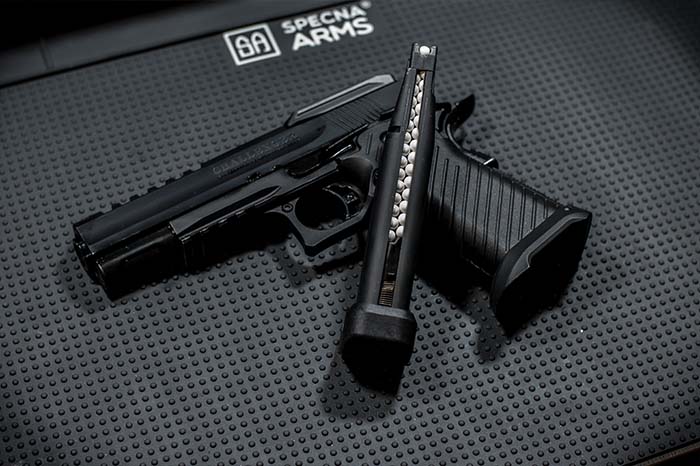 Internal build - the devil is in the details

After removing the slide and pulling out the barrel, which is easier with a dedicated tool for the slide return spring guide, we can take a look at the inner barrel. 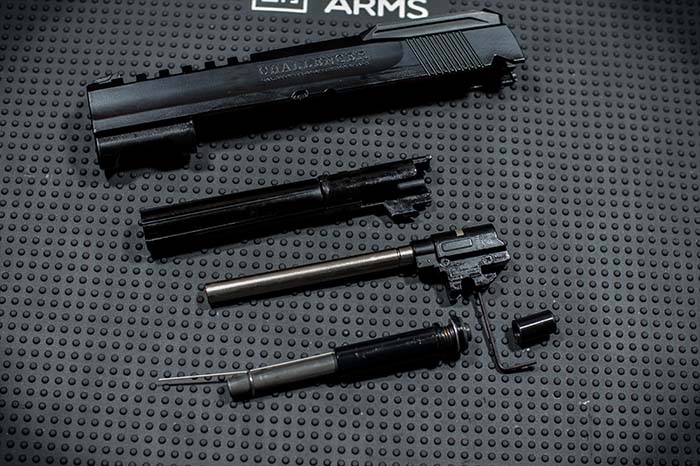 Installed is a Master Mods 6.04mm 113mm metal barrel with a TDC R-hop Master Mods hop up chamber in TM standard, I will explain what that means...

TDC - Top Dead Center - it is a system of pushing on the hop up bucking perfectly from the top, which guarantees a straight bb flight path, regardless of the pressure level.

R-hop - this is a type of BB curling system consisting of a barrel-shaped patch and an outer bucking, such a system provides a sufficient contact area between the rubber and the bb, thanks to which you can use very heavy bb’s that will fly far and straight. ICS recommends using bb’s with weight of not less than 0.30g, I personally tested 0.36g bb’s, and they flew straight up to a distance of 60m!

If we decided to use lighter bb’s than 0.30g, ICS adds a suitable hop up bucking in the set.

The hop-up is adjusted from the bottom of the chamber using the Allen key included in the set.

The BBU has a double seal and I recommend keeping this part well lubricated, the tolerances between the parts are very small which guarantees great seal and good performance, but also means that the mechanism will not run well dry. 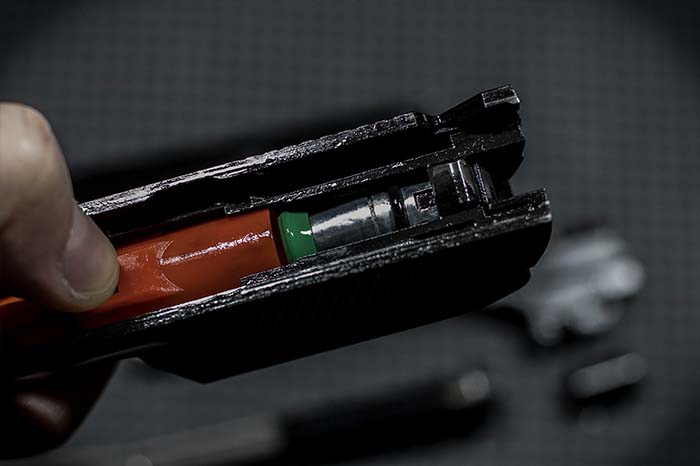 An unusual solution is the installation of the so-called Advanced frame, which has extended guides which guarantees a more stable mounting of the slide on it. 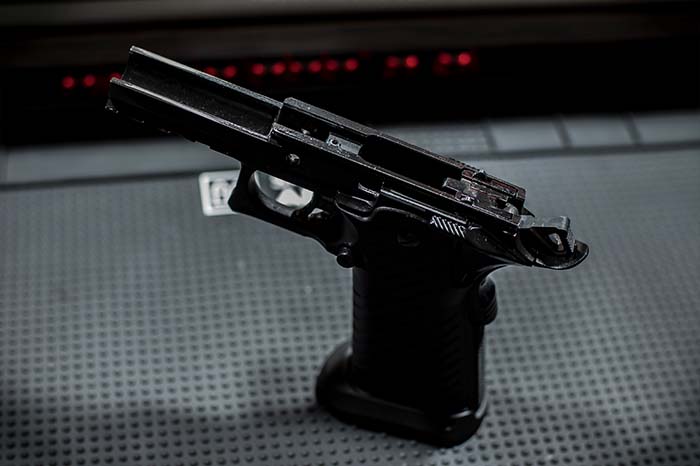 The icing on the cake are steel internal elements such as: 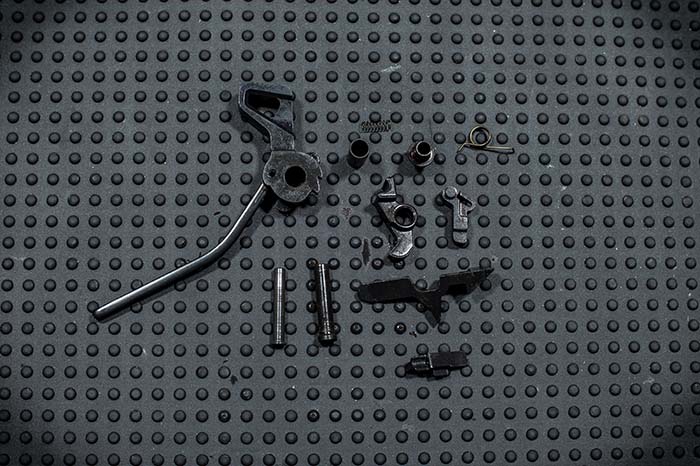 Such a set guarantees long and trouble-free work, and it is worth noting that in competitor airsoft guns, the elements are made of zin-aluminium alloy and can wear out quickly, here I would not be afraid of it.

In the shooting test the airsoft gun had no problem reaching a range of 60m, which in my opinion is a great result. 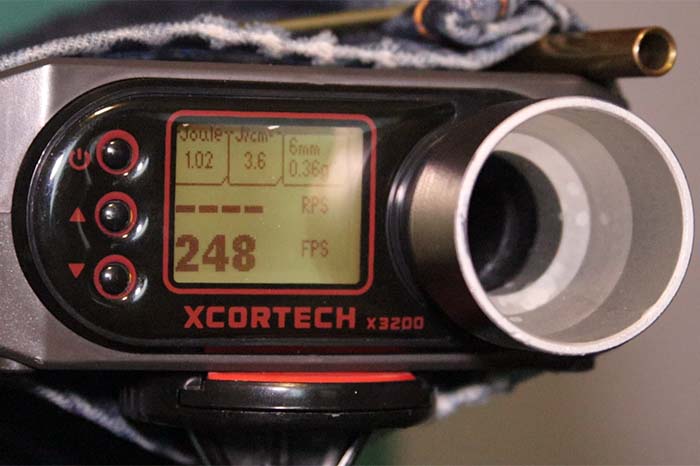 I would like to emphasize again that the airsoft gun is in the TM standard, which means that we have a whole range of internal and external parts on the market, and the gun itself works with most of the magazines available on the market, even with CO2 SRC magazines if we would like to have a bit more power in the gun.

In a word of summary

In marketing materials, ICS describes its products as "Game Changer" and in my humble opinion in the case of the Challenger this term is absolutely appropriate.

The pistol has all the elements so far not found in a factory-made airsoft gun, which make it actually change the rules of the game. Starting from the great barrel with a precise hop-up chamber, through the R-hop rubber that spins heavy bb’s straight and far, through a set of steel internal elements, ending with super performance straight from the box. An additional advantage of the replica will be the fact that it looks, at least in my opinion, very interesting and in the holster itself it has interested many players during airsoft games. I would recommend the airsoft gun to people who are looking for a pistol with great performance straight out of the box and a construction that will work without problems for a long time, and for whom its compatibility with parts in the TM standard will be an additional advantage, which will additionally allow for its tuning if necessary.