After the great success of the ARP9 or PCC9 replicas, G&G turned its gaze towards a slightly larger pistol caliber, which is the popular forty-five, and this is how we got the G&G PCC45.

PCC is the abbreviation for pistol caliber carbine. The number 45, of course, is intended to refer to the caliber .45 ACP. The replica itself looks a bit like the LWRC UMP or SMG45, but when we look closer, we will see that its design has a minimum of common features with the above-mentioned models.

Unboxing of the replica - Modest but enough

Box for G&G is, as always, colorful and full of information about this AEG replica. On the front, you will find information that this is a high muzzle velocity model, and it belongs to the Combat Machine line. The replica is equipped with ETU and MOSFET units. The box can be used to carry the replica due to the built-in handle.

Inside we will find: 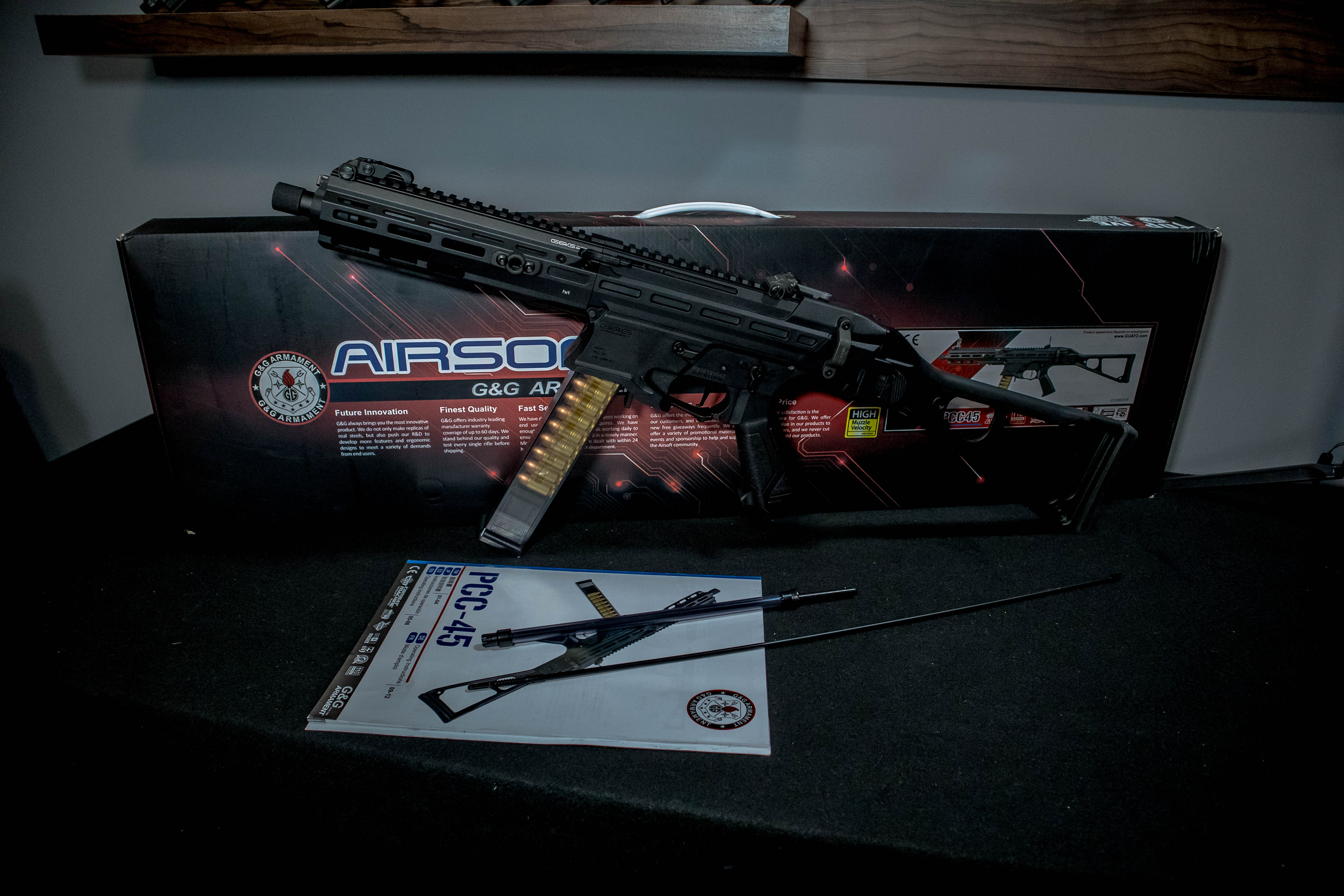 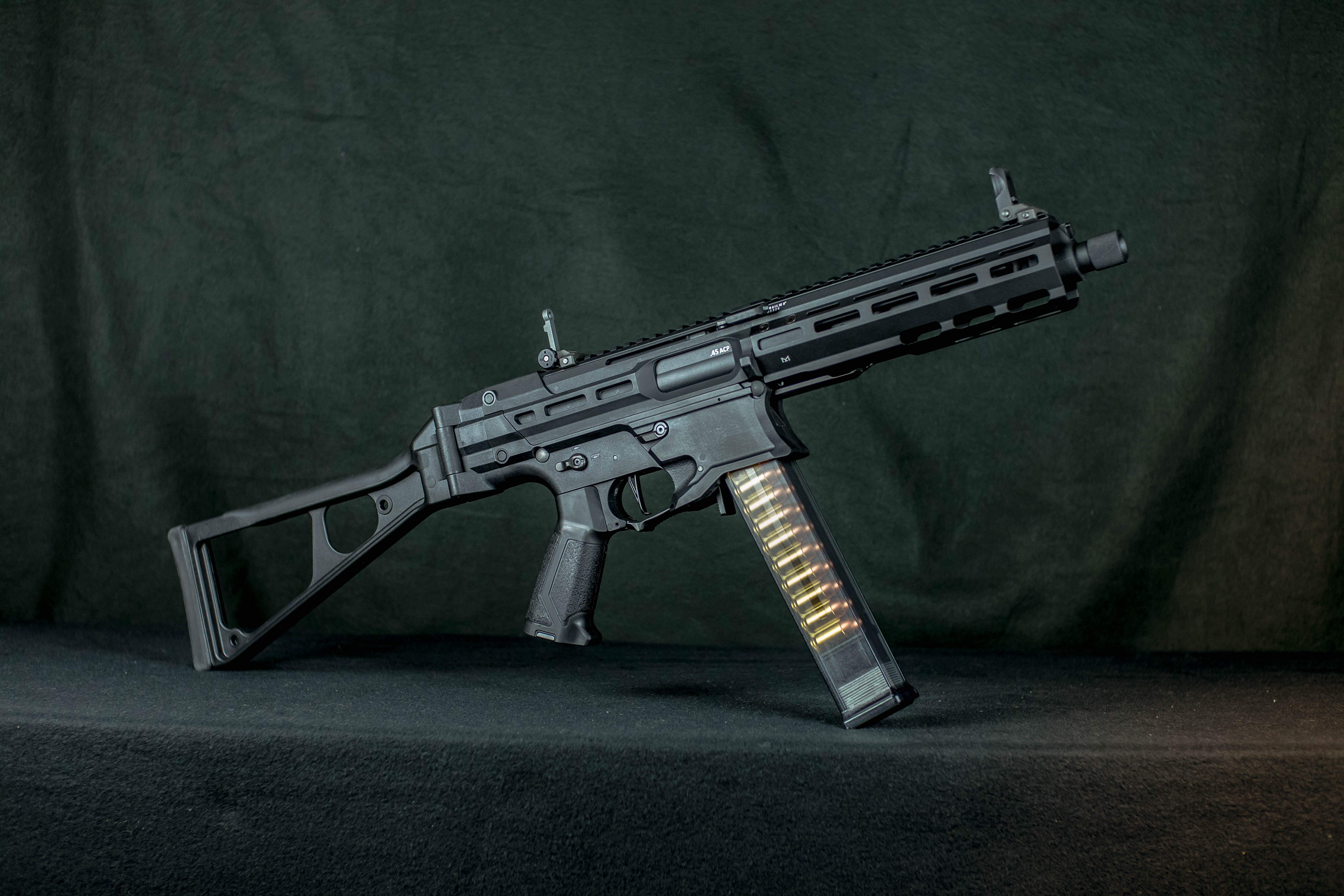 The replica measures 74cm with the unfolded stock and 50cm with the folded stock. The weight of the magazine is just over 2.5 kg. 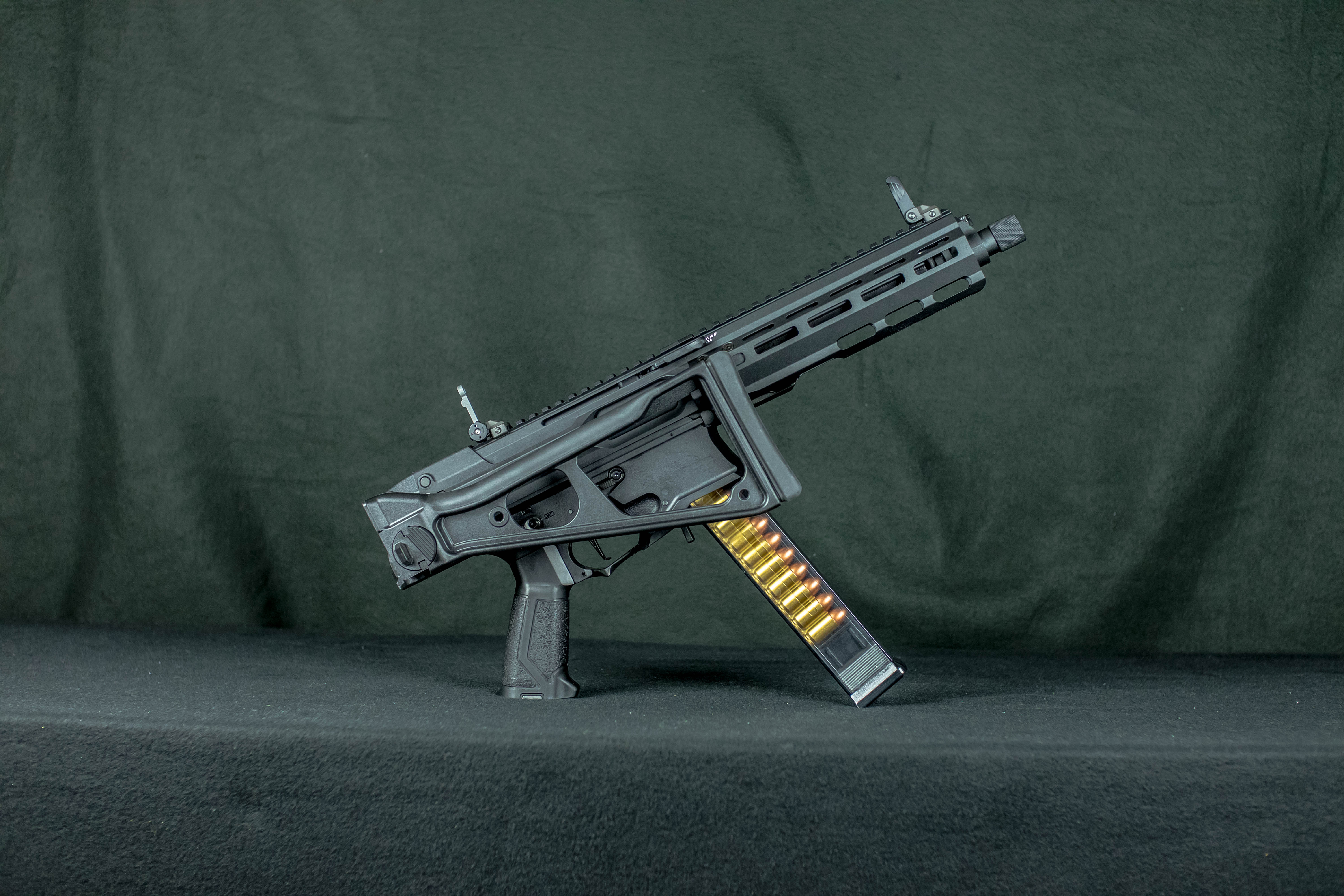 The replica is made mainly of the polymer. The materials used include elements such as the entire body, stock, or pistol grip. Despite the polymer construction, the replica fits very well. The stiffness of the structure is determined by such elements as a grove between the front and the body, which additionally stabilizes the connection. 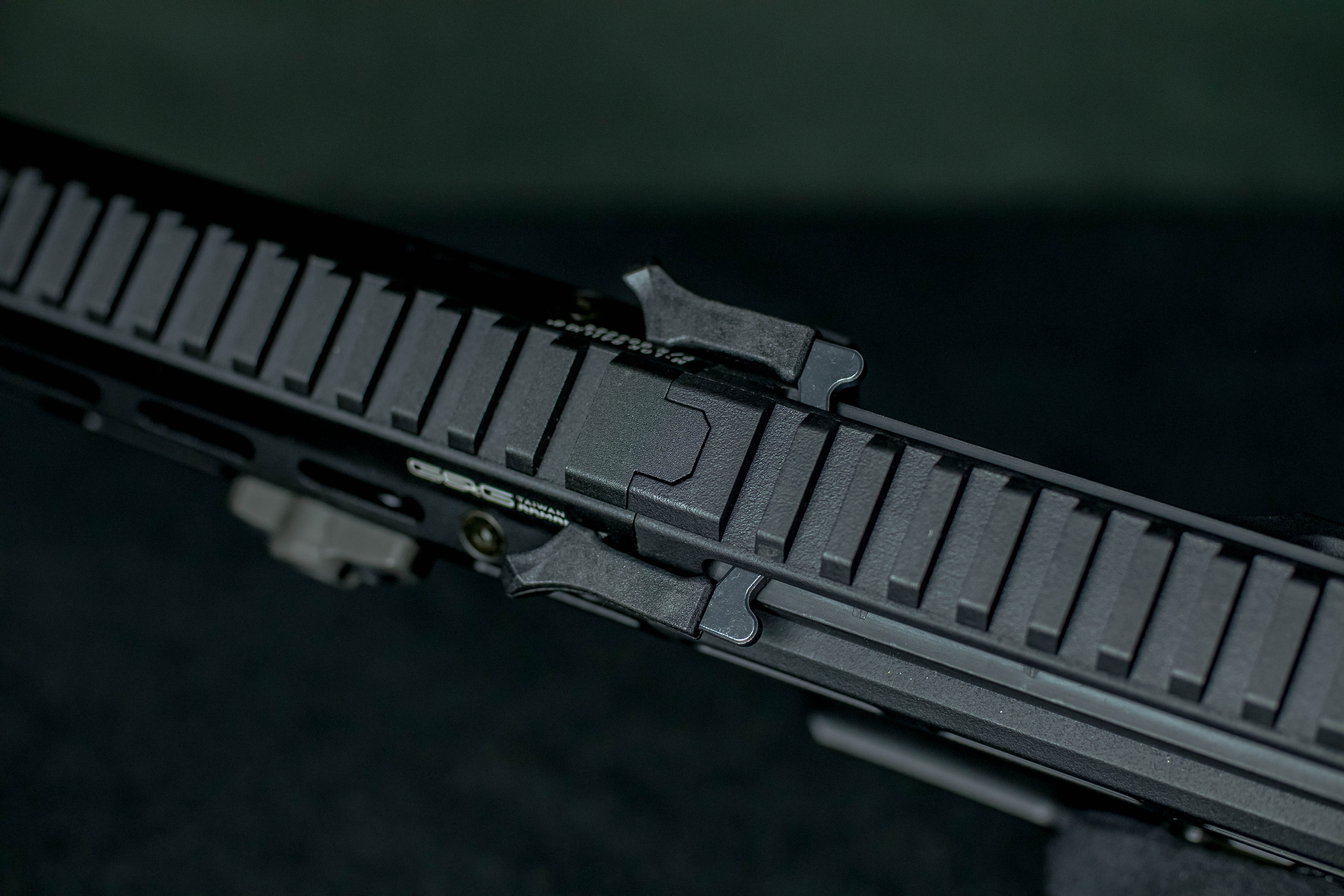 MLOK handguard is made of aluminum, and from metal, we have such elements as an external barrel, trigger, ambidextrous manipulators, folding sights, two spots for sling or pins and screws. 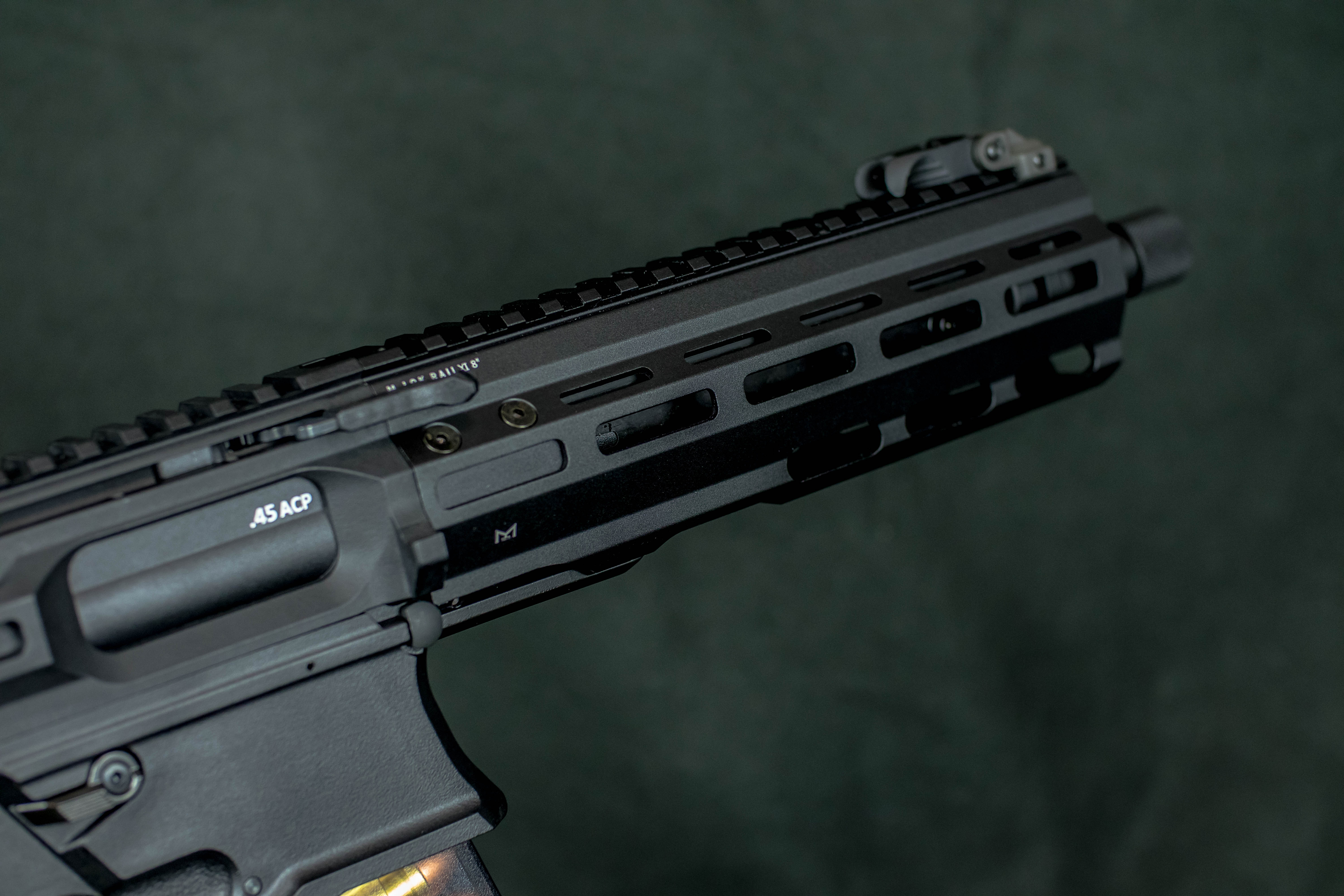 The barrel ends with a 14mm CCW thread hidden under a knurled cap, so mounting a silencer or barrel extension will not be a problem. 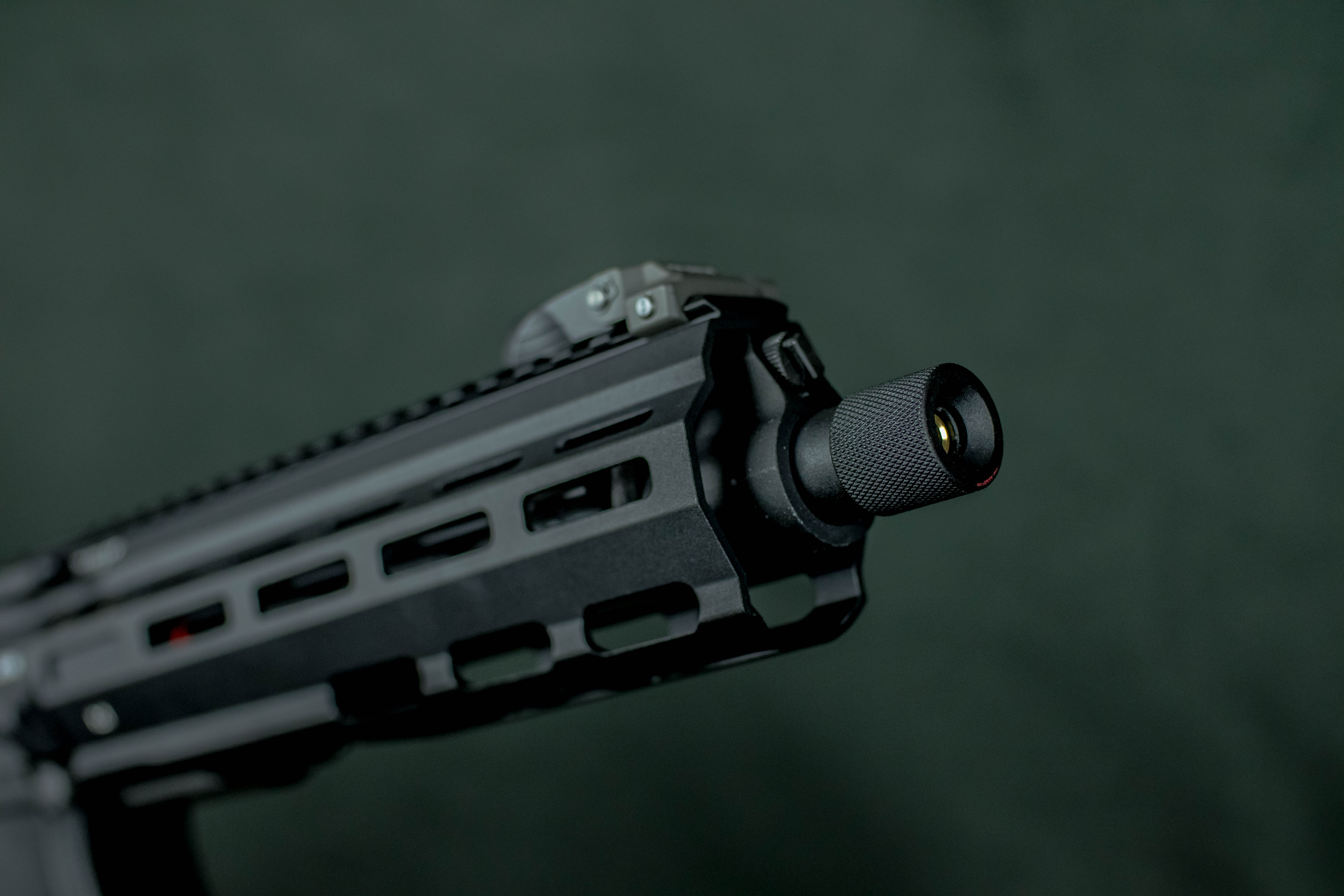 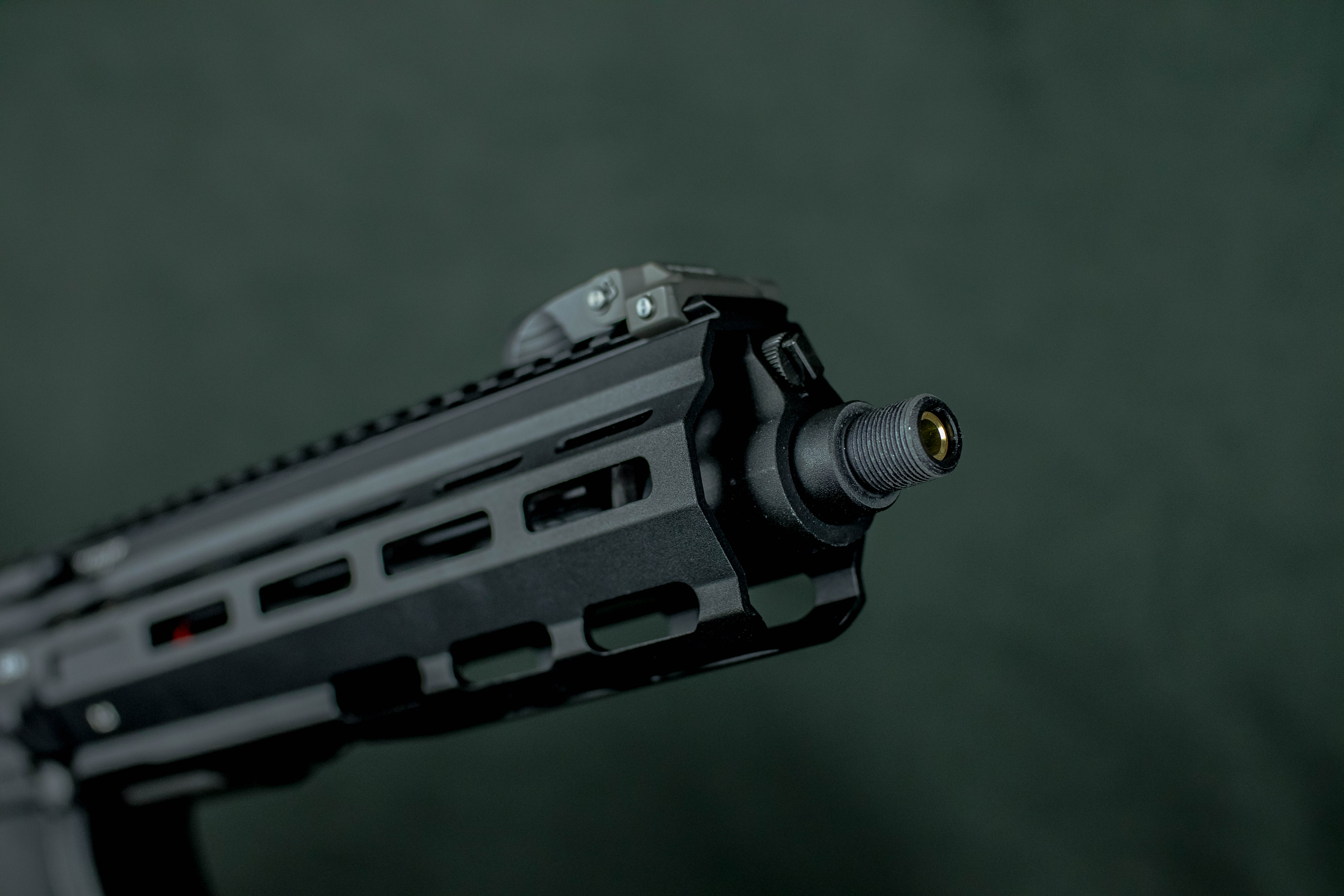 The replica has ambidextrous manipulators such as the fire selector, bolt release, or even a reloading handle, which should appeal to many users also the flat trigger is quite comfortable, and thanks to the ETU, it „breaks” at the very end while its reset is very short. 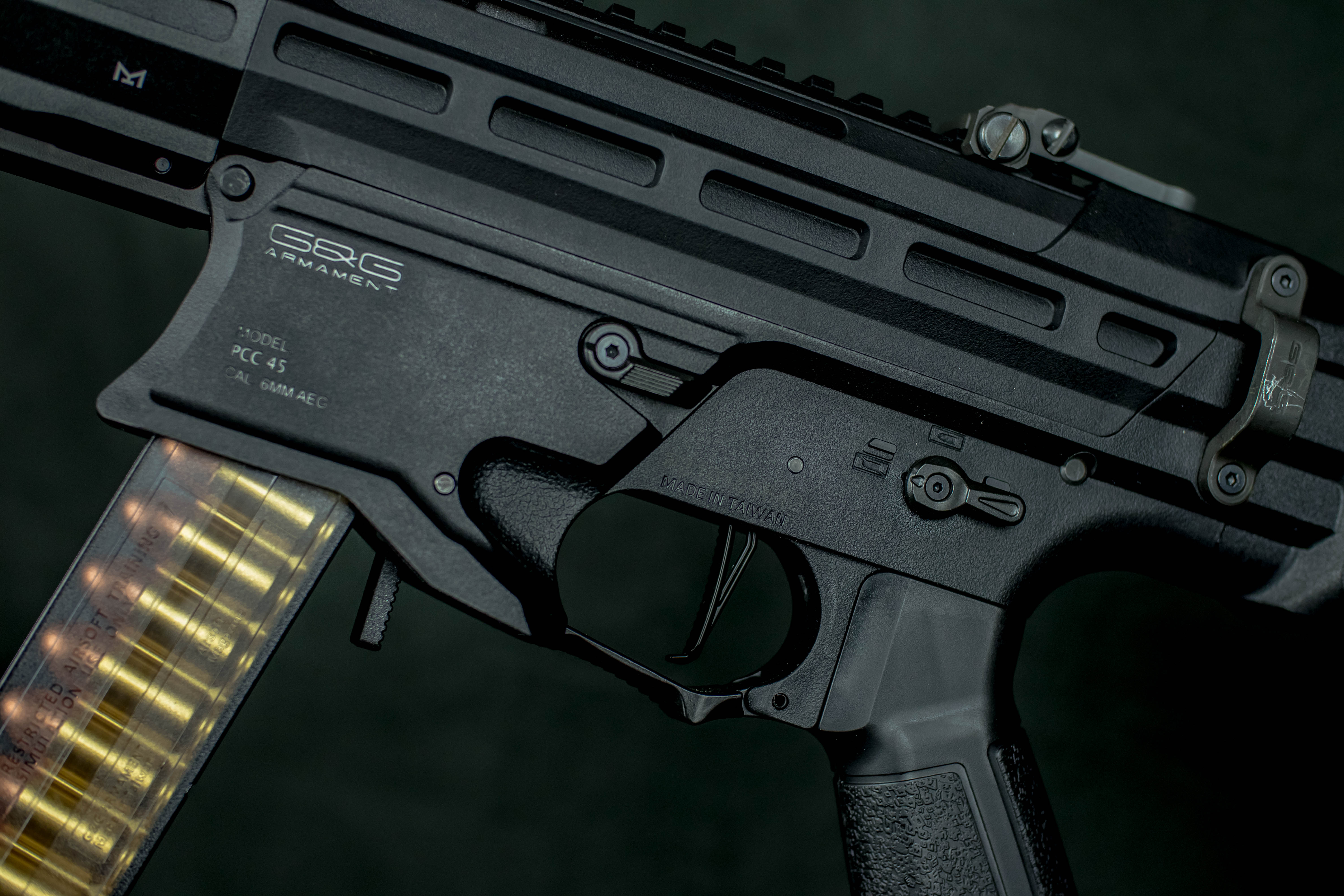 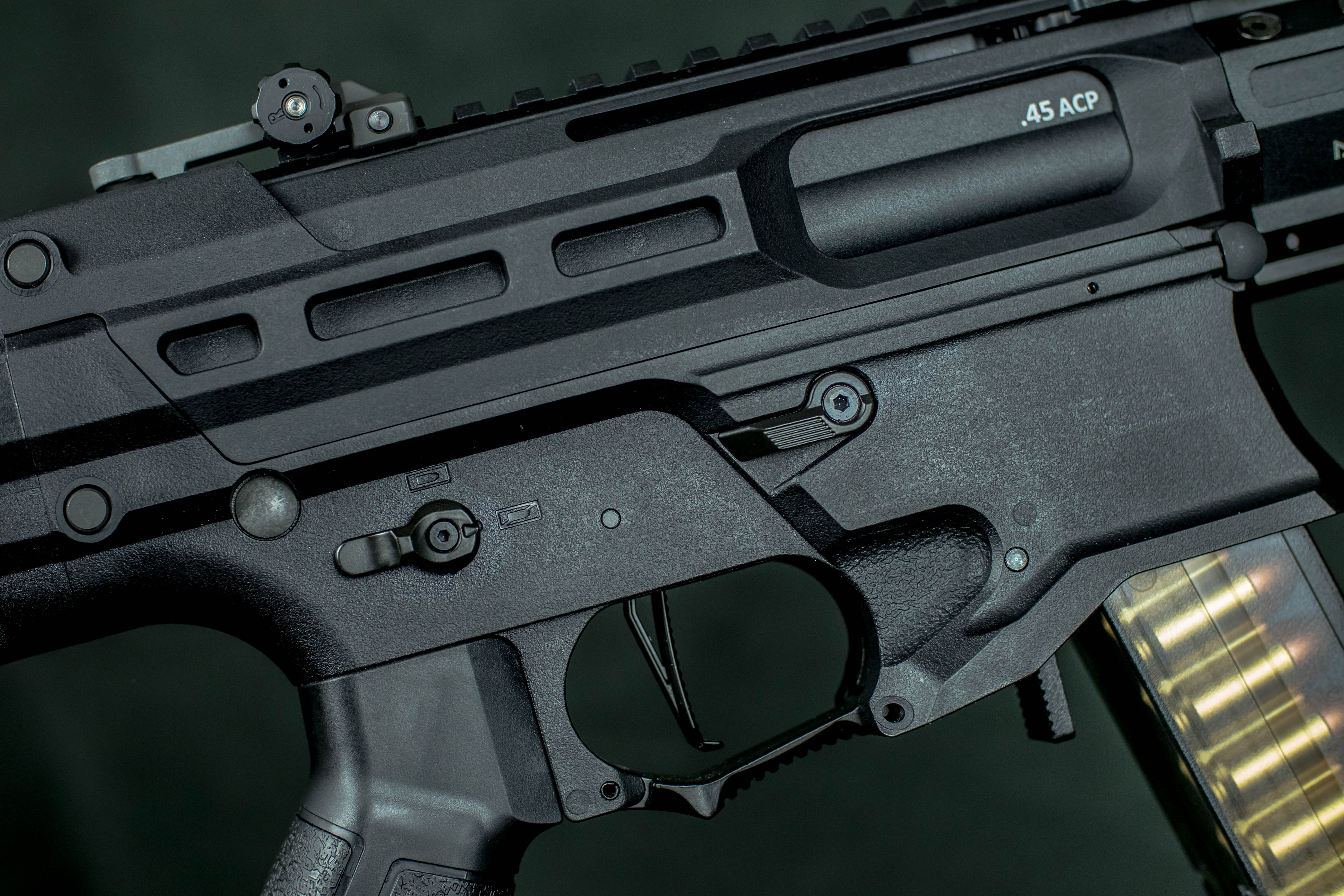 After you pull back the charging handle, the dummy bolt locks in the rear position and the rotary hop-up chamber appears to our eyes. By turning the knob up, we increase force, and by turning it down, we decrease it. 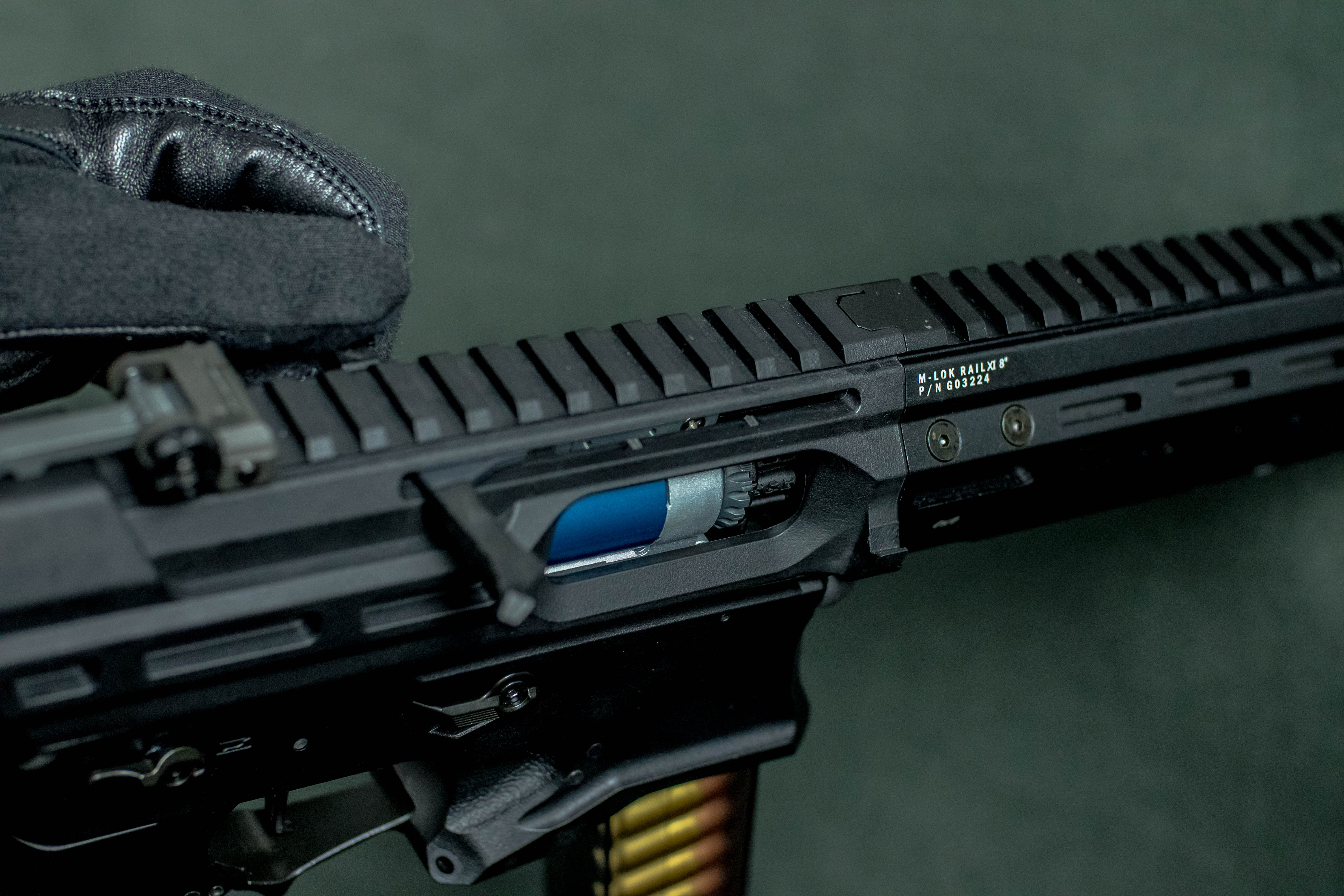 To remove the front, first unhook the visible lever, then you can slide the front forward. 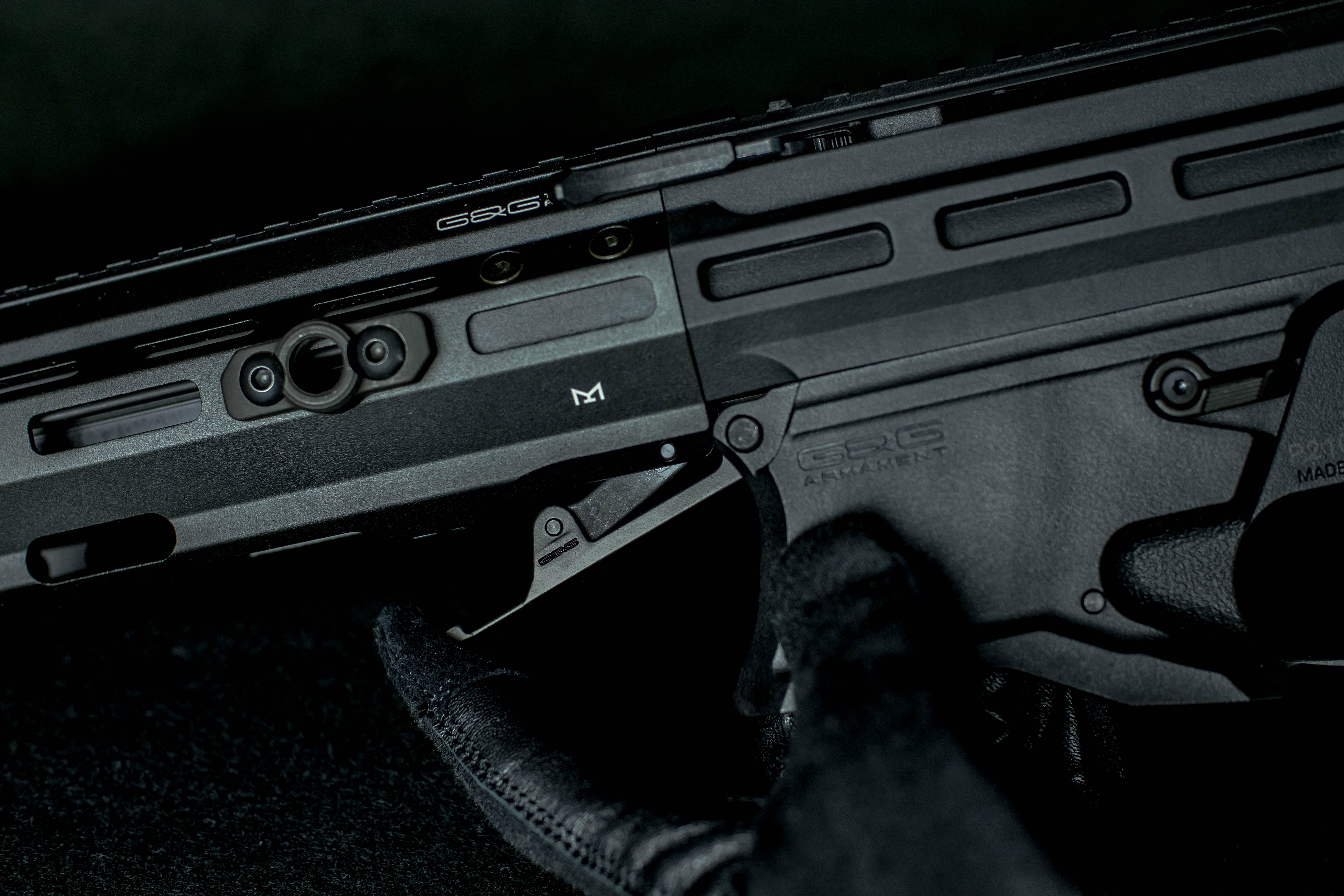 This gives us access to the prepared place for the battery. The wiring ends with a Tamiya plug. I was able to fit the Turnigy Nano-tech 11.1v 1000mAh pack. 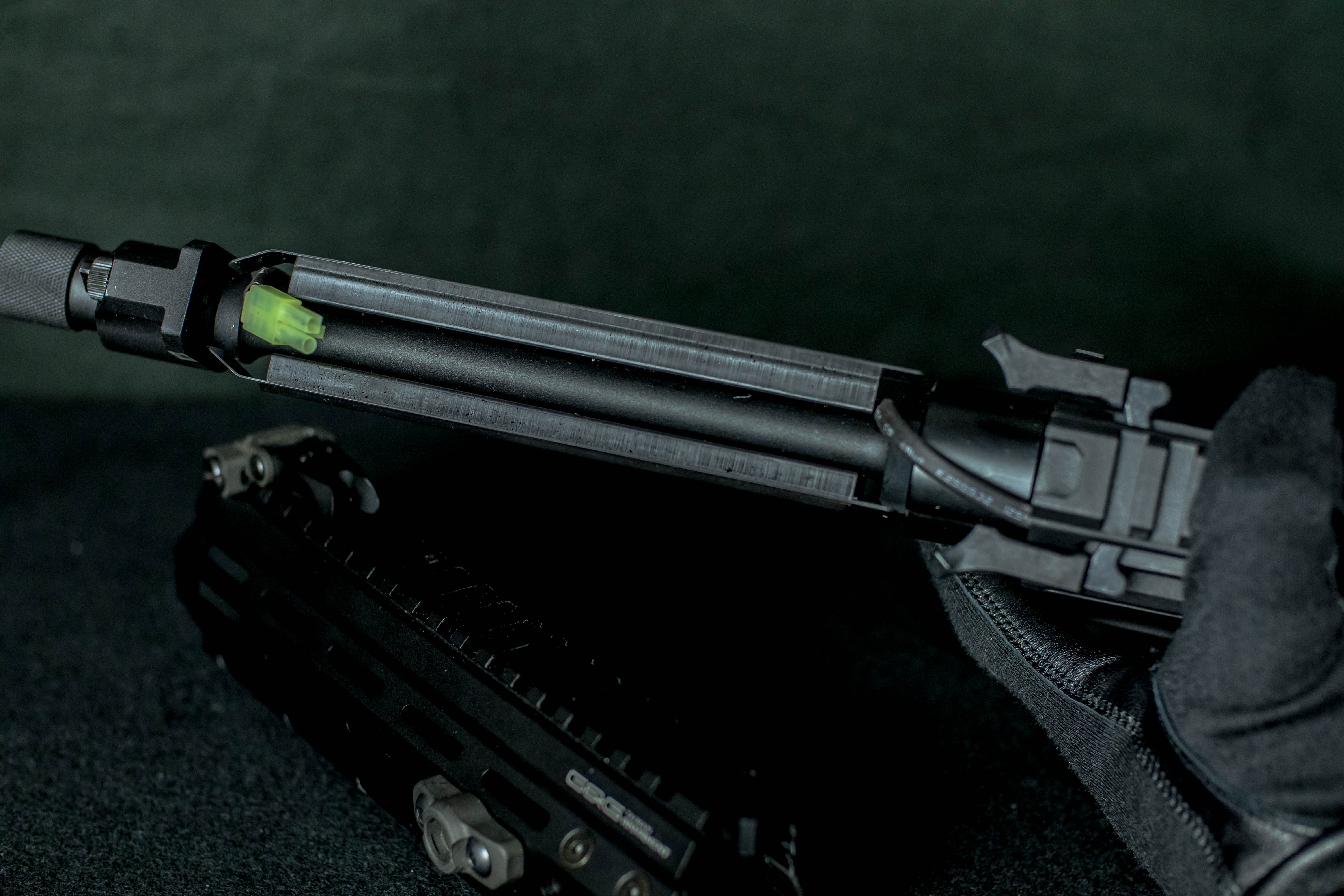 After pressing the button on the stock, you can fold it to the right side, where a hook is prepared for it so that it does not unfold. 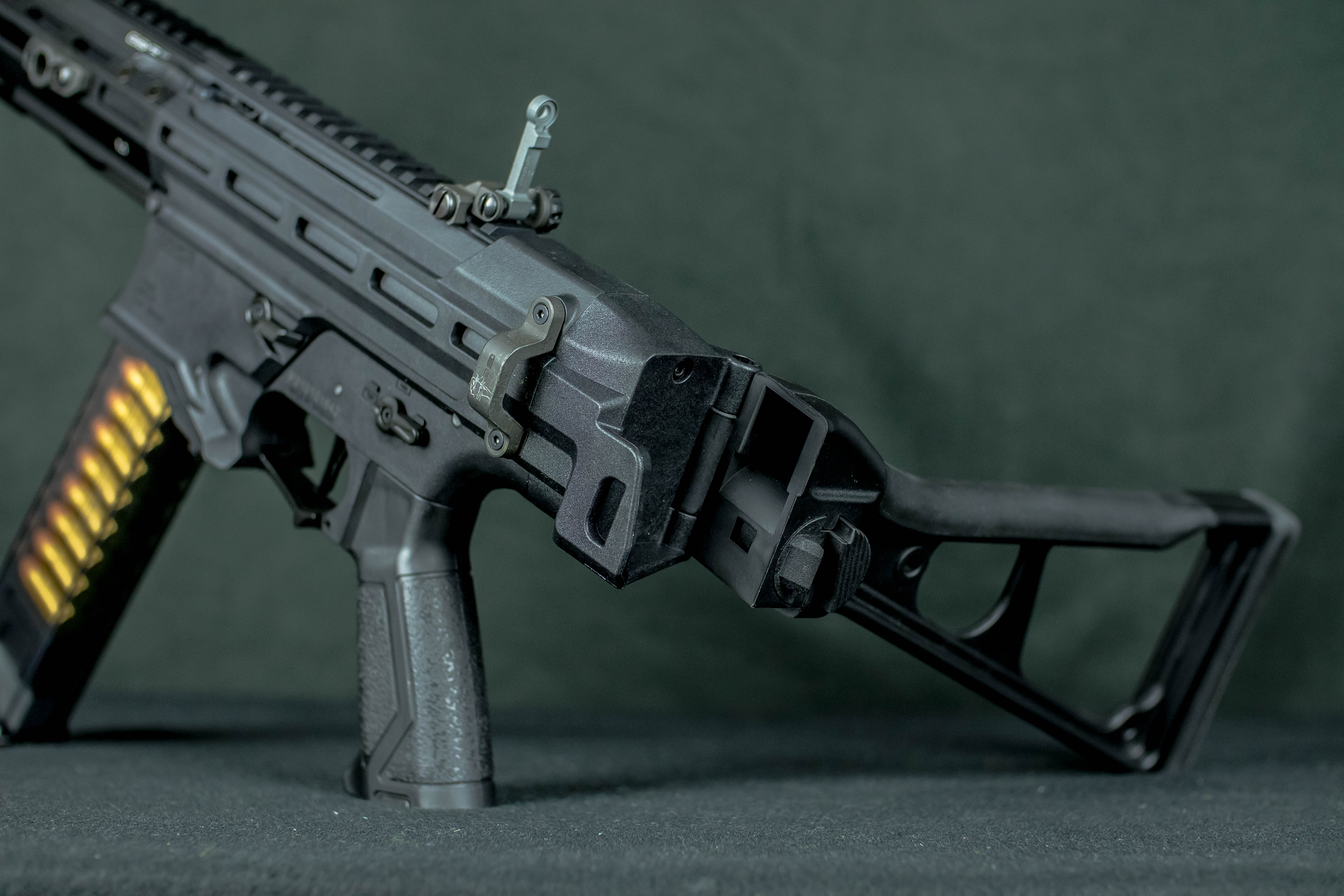 After disassembling the stock, which is held on two hexagonal screws, we have access to the 4th generation MOSFET system, which protects the battery from complete discharge and gives us the ability to set a three-shot burst instead of the full auto mode. To do this, just hold the trigger after shooting in semi mode until you hear a beep. In the same way, the auto mode is restored. After disconnecting the power supply, the replica also returns to the standard settings. 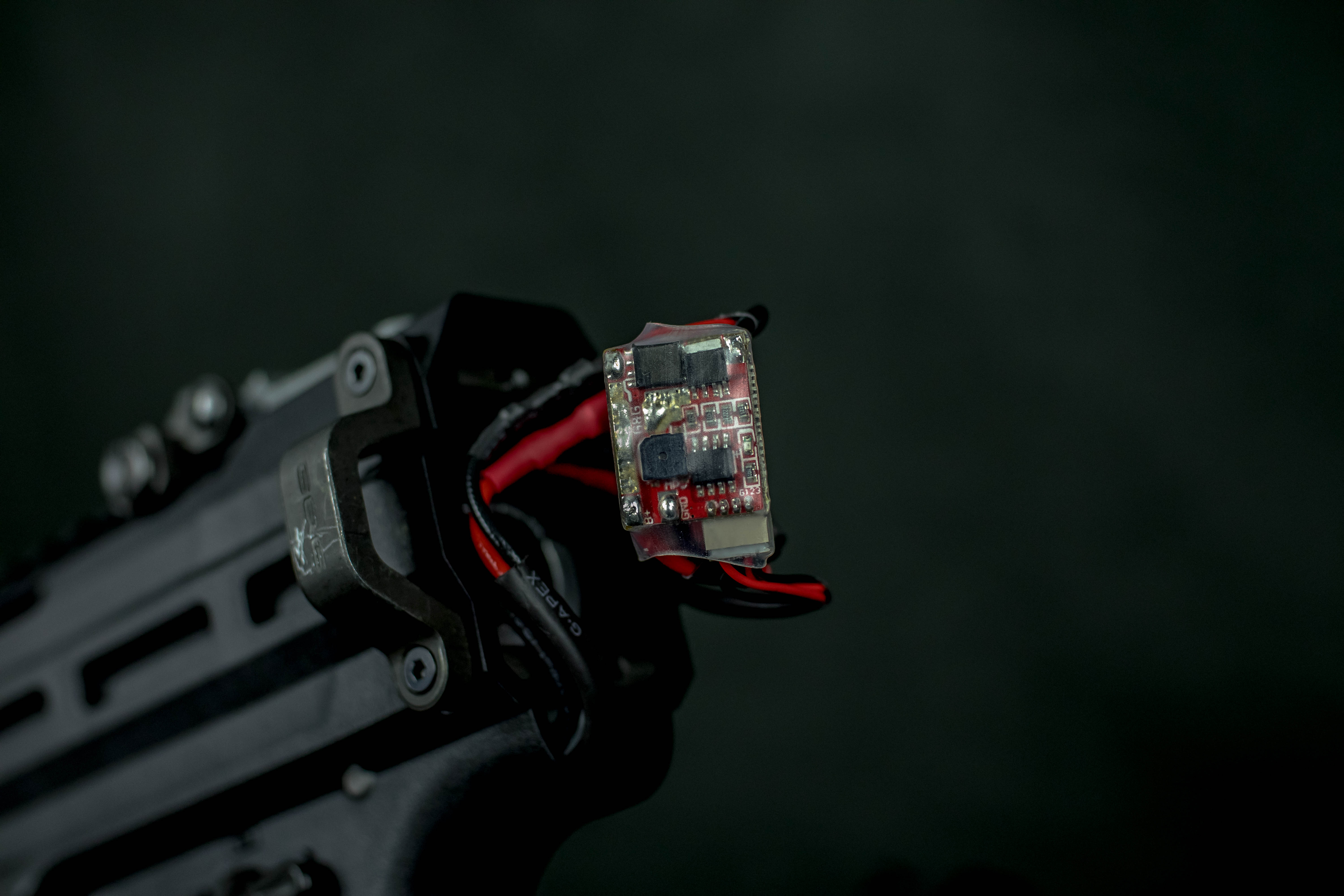 Here we also have access to the quick spring change system. After pressing and turning the guide, we can pull it out and change the spring to another. 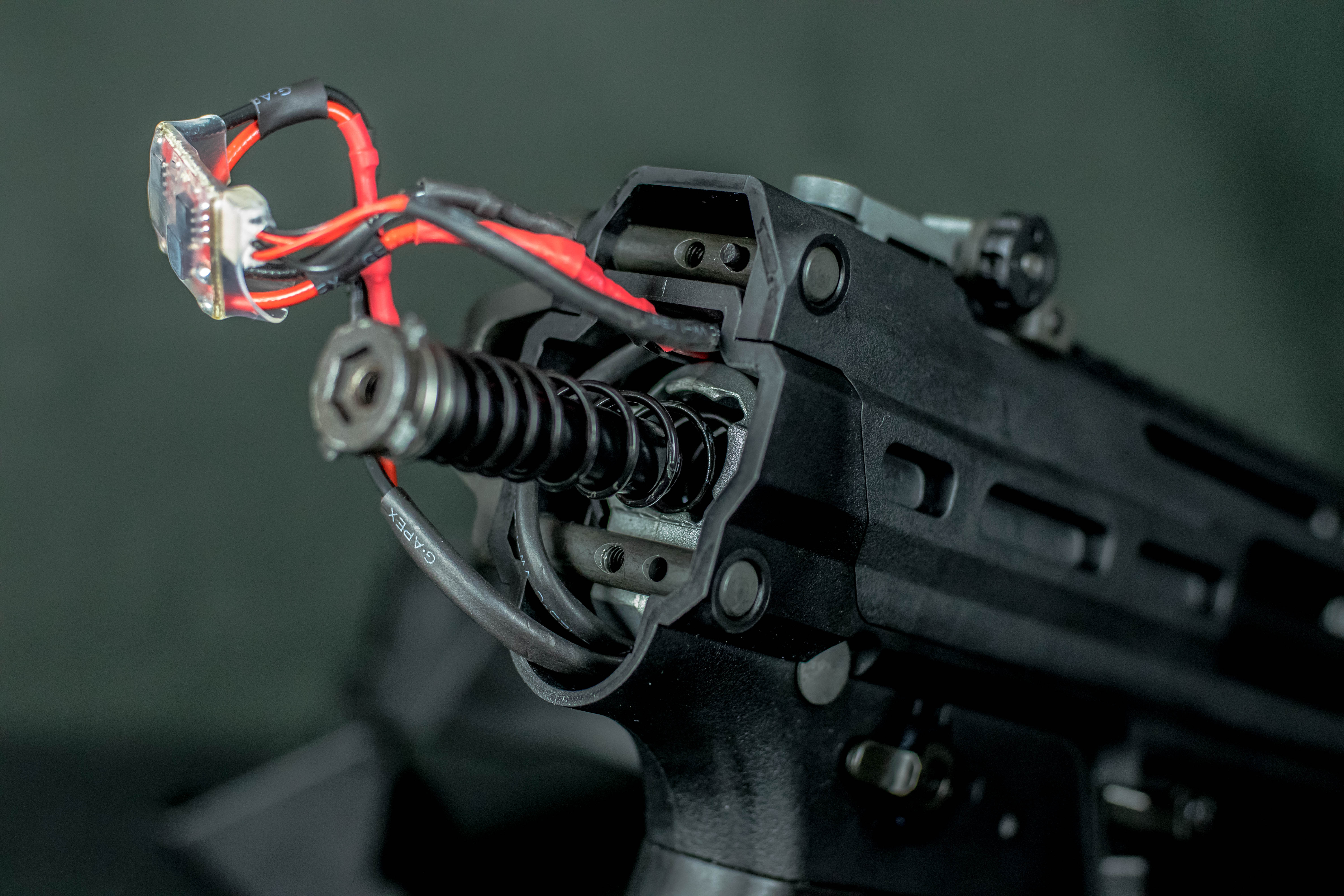 The magazine that we get in the set with the replica is a mid-cap holding 110 BBs. It has a transparent casing that hides dummy .45 bullets. It also has a long pusher that allows all bb’s to be fed. It is dedicated to this replica, and UMG45 magazines will not fit. The replica's magwell narrows towards the center, which makes attaching the magazine much easier. There is also a magazine release button here. 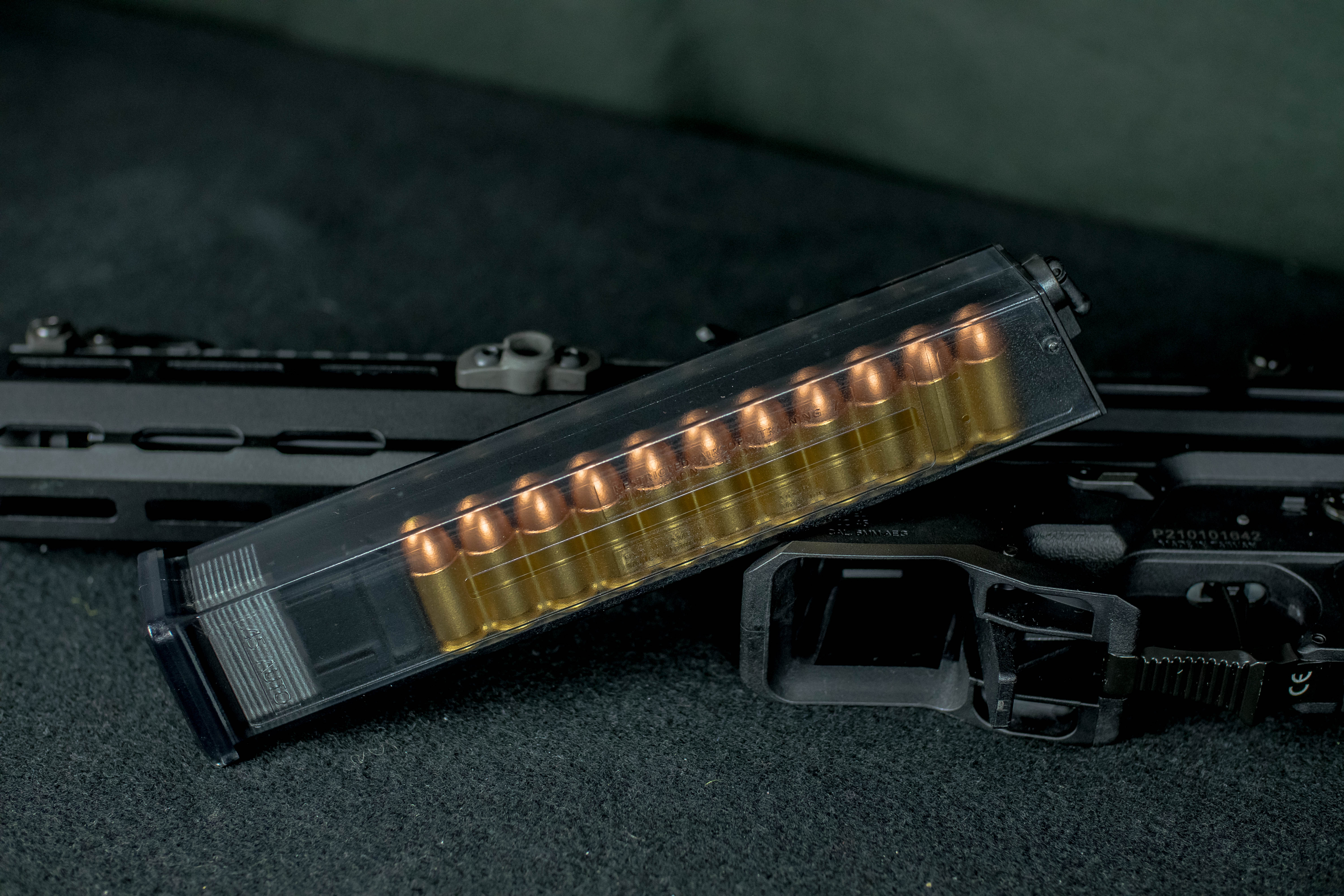 The heart of the replica is the proven G2 gearbox, which can be found in high-end models from G&G. The shell with visible reinforcements has an ETU system installed that replaces the classic contacts. The system is based on micro switches that are responsible for the operation of the trigger, cut-off lever, and even for the detection of the selector plate position. Thanks to their use, the trigger has a very short reset, and the MOSFET knows exactly how many shots have been fired, which is necessary for the operation of a three-round burst. 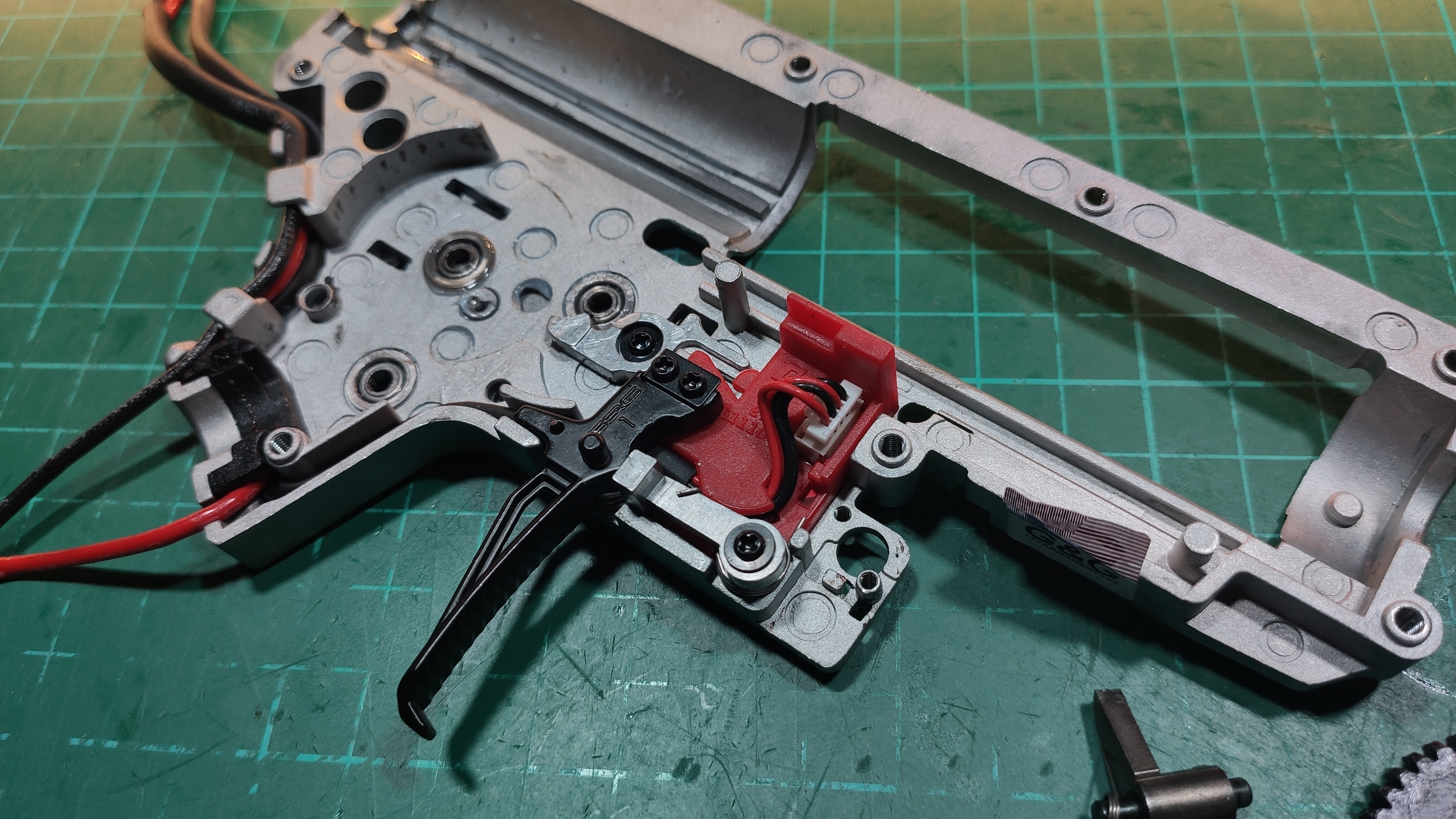 The replica features 18:1 gears with a short stroke, which means that instead of 15 teeth, the sector gear has only 13 teeth, thanks to which the reaction to the trigger and ROF are much better. The bevel gear itself has 5 anti-return teeth, and its design is to make the system work quieter. 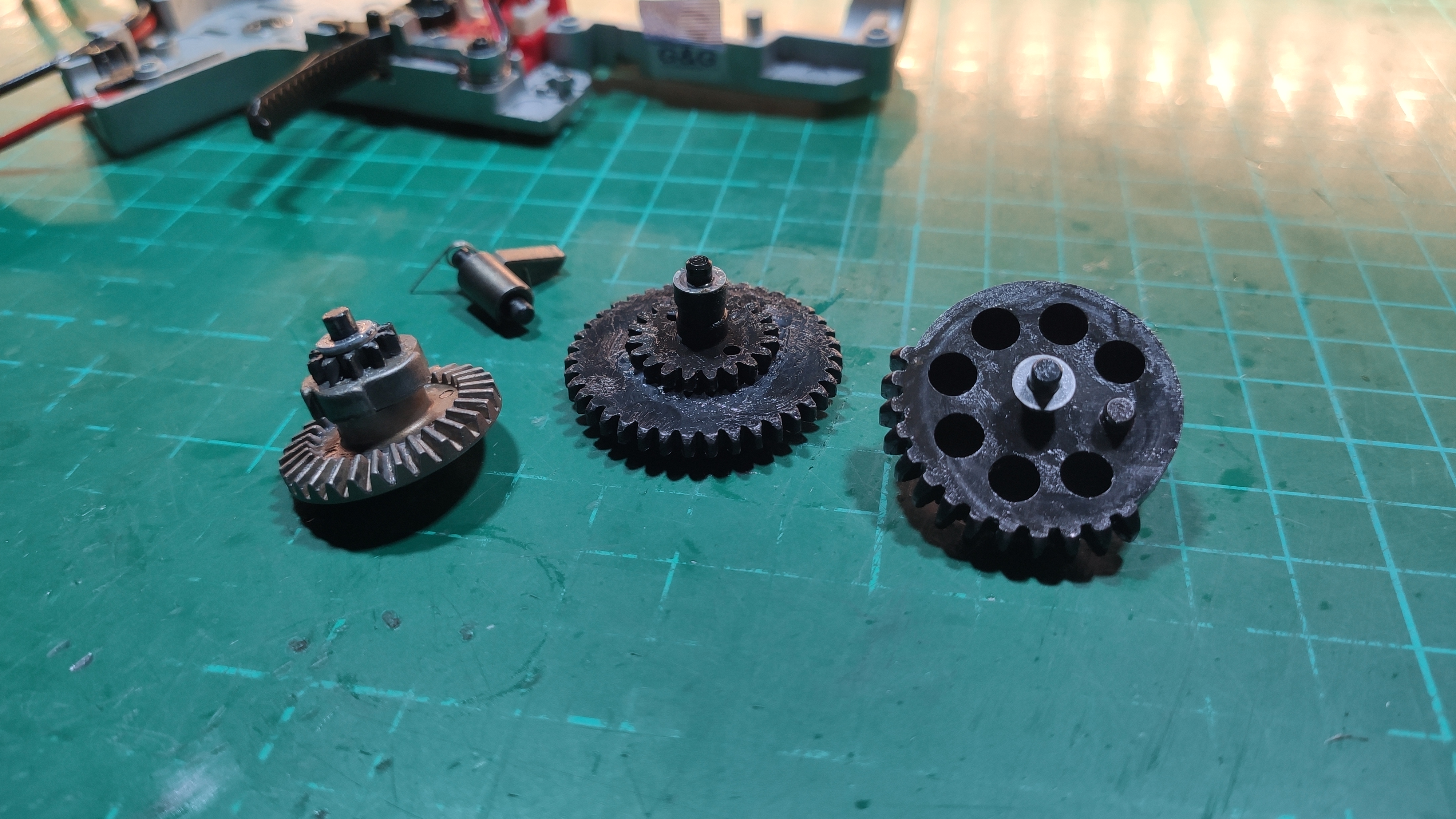 The pneumatic system in the replica consists of:

The tightness of the entire system is unfortunately not the best. The set did not pass the syringe test. 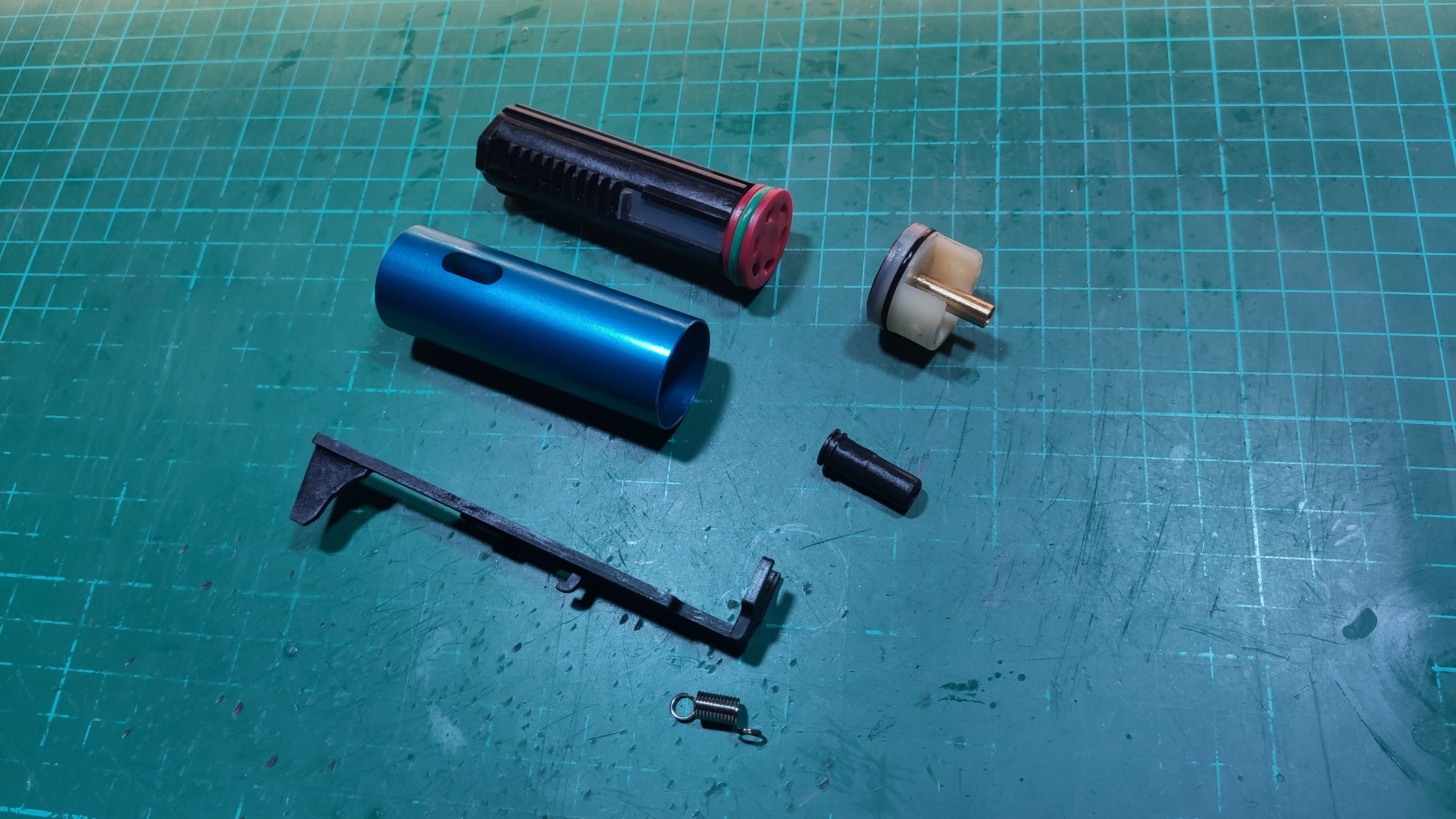 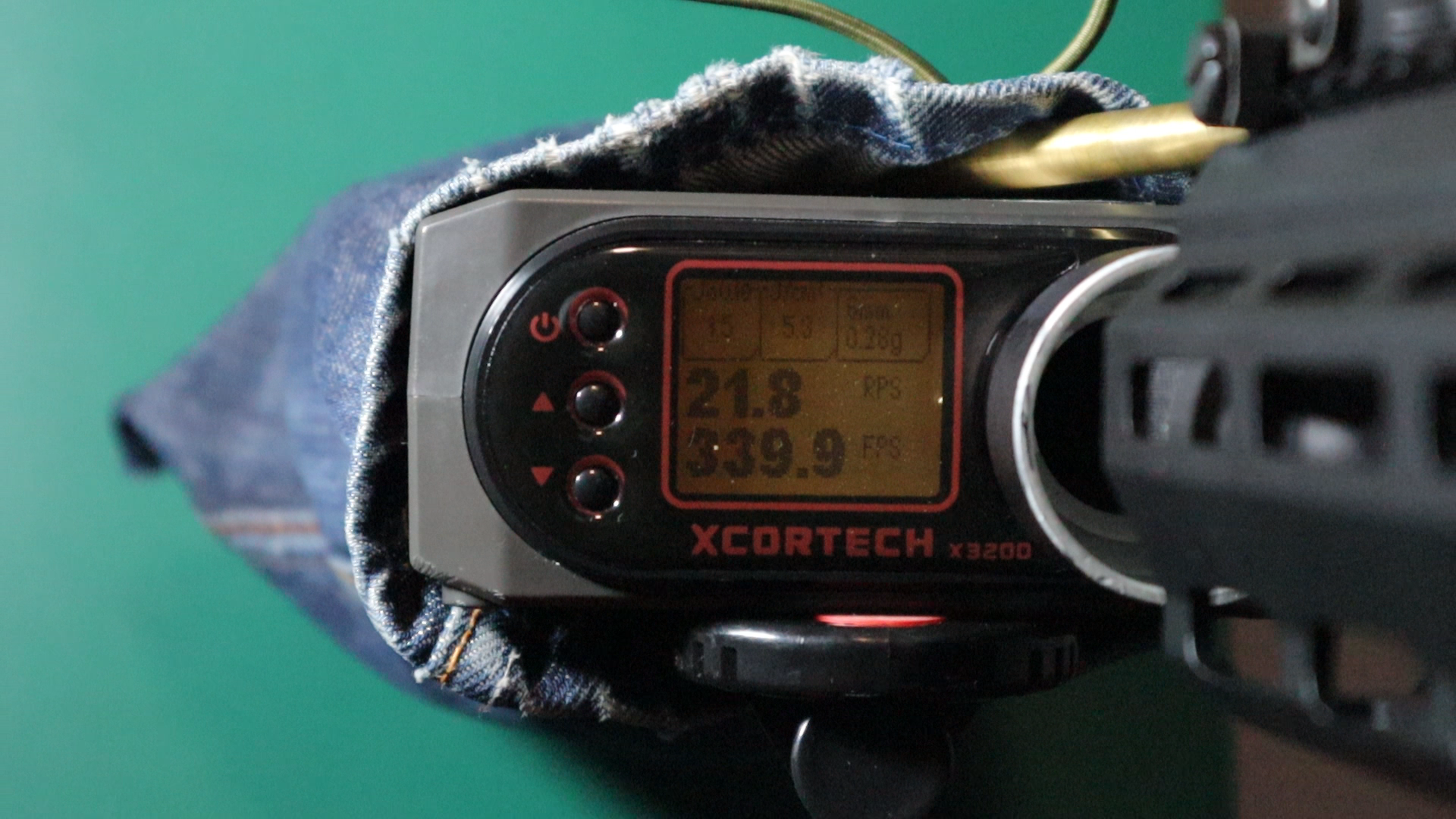 The 255mm barrel with a 6.04mm diameter is responsible for accuracy. 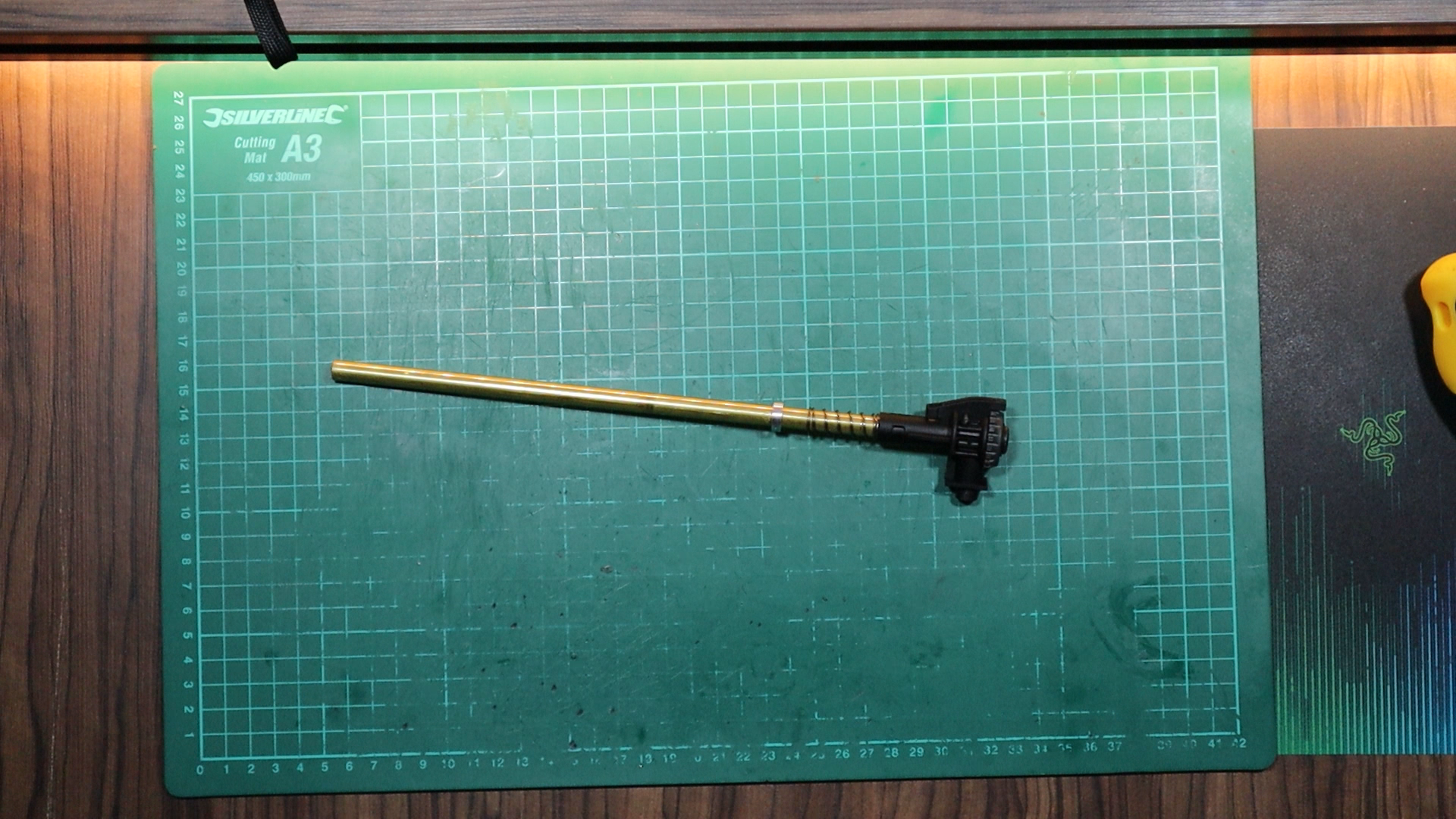 The rotary chamber mounted on it has a knob with clear settings. 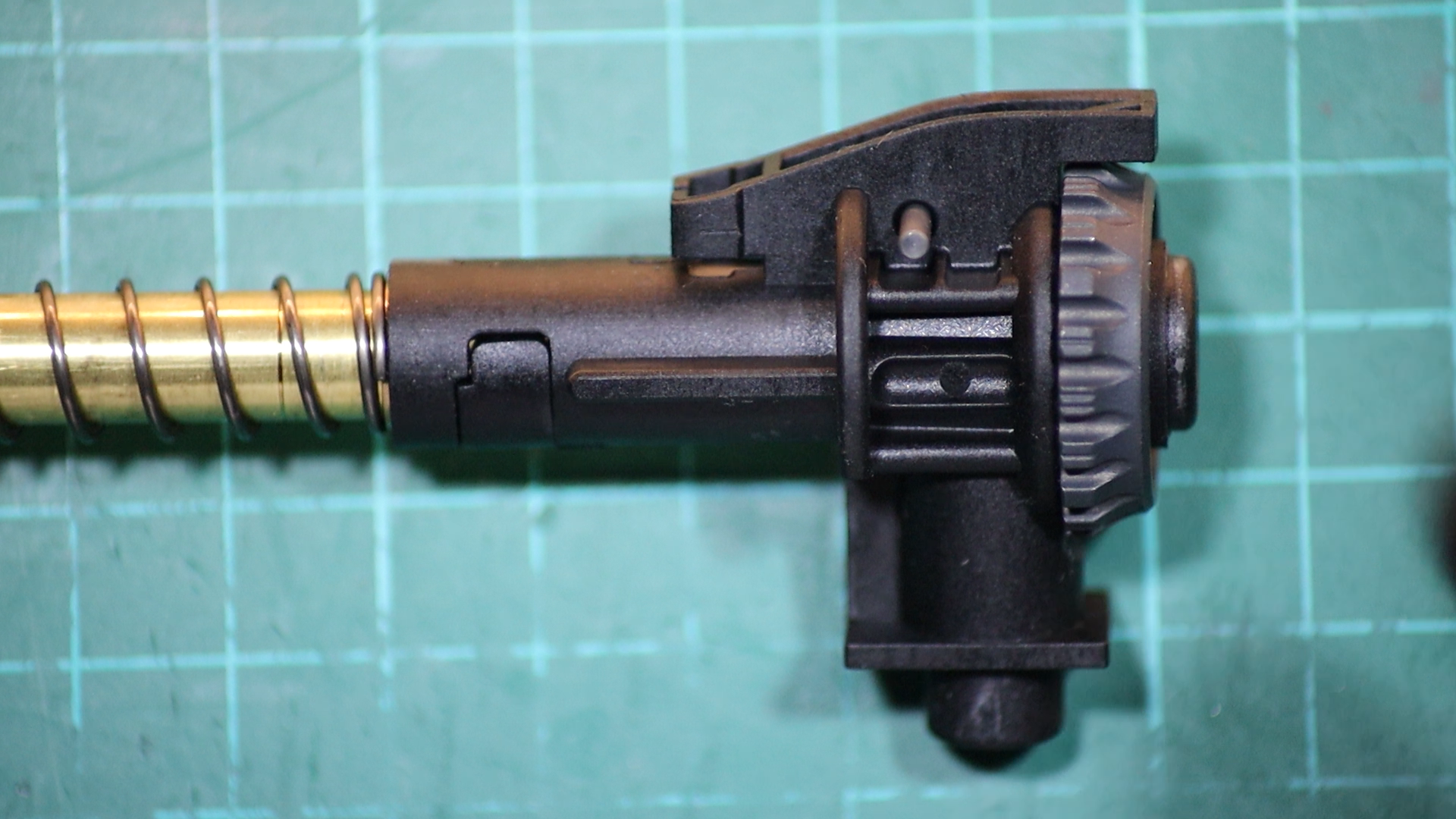 The bucking responsible or the spin is the well-known cold-resistant blue bucking with two tabs. The bucking has no problem with hoping the 0.28g BB up to a distance of 60m. 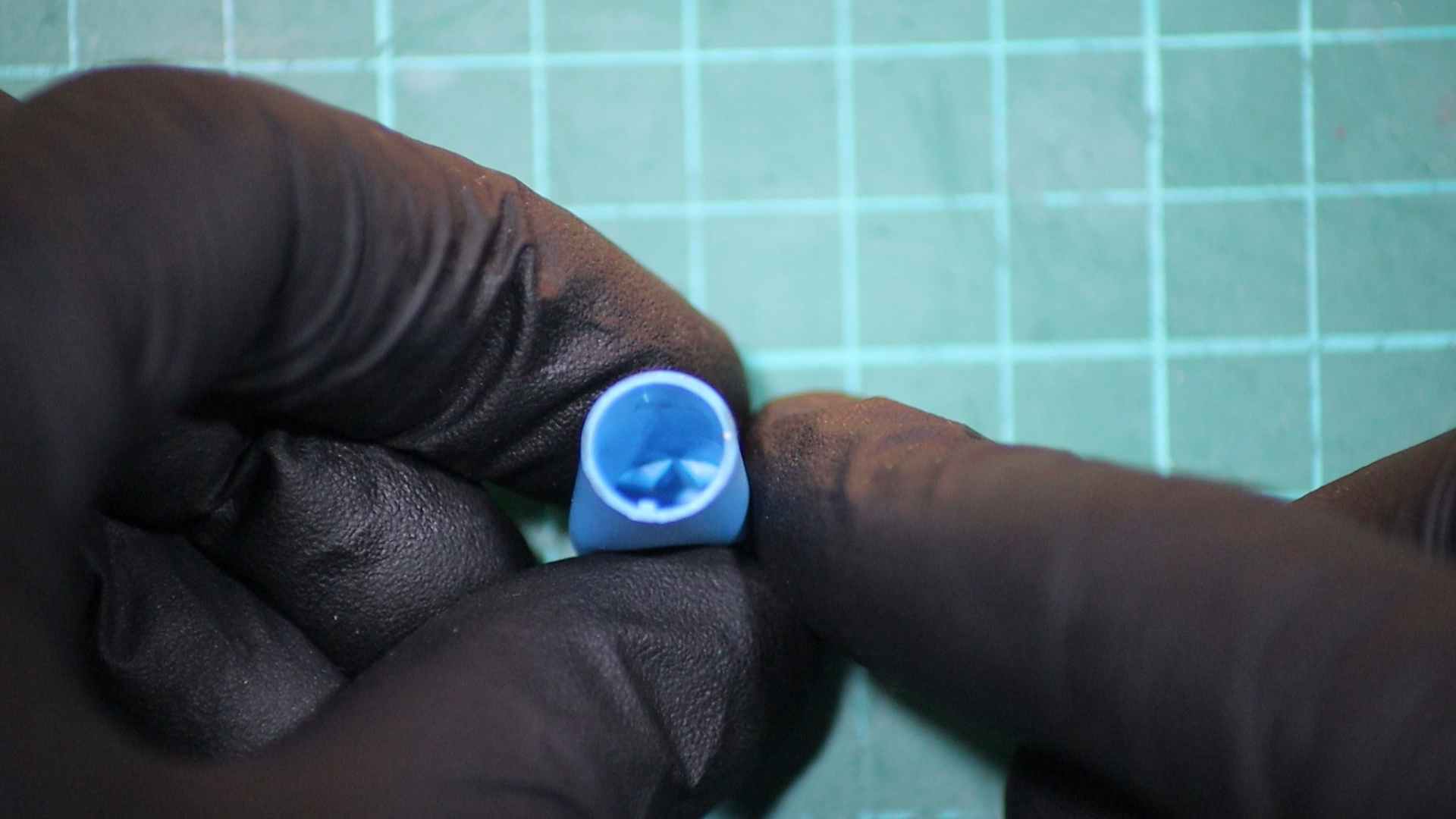 G&G PCC45 carbine replica - A word at the end

The G&G PCC45 is a very original replica which design is associated with other constructions. Nevertheless, it is equipped with several original solutions. Thanks to the polymer construction, the replica is quite light and handy, despite its length of 74 cm. The ambidextrous manipulators add a lot to its ergonomics. The G2 gearbox, ETU system, and the 4th generation MOSFET make this product ready for cooperation with strong batteries, right from the box. They also guarantee a very nice reaction to the trigger. Built-in gears with a short-stroke provide a rate of fire of ~ 22 BBs per second. I am not only a fan of the pneumatics used, but the entire set of pneumatics also did not pass the syringe test, and the head itself has traces of wear after just one game. To defend it, let me add that we were playing -8 * C so, it could have influenced her appearance.

Nevertheless, the replica has no problem with generating ~ 1.5J with 0.28J BBs, and soft, cold-resistant rubber, and a rotating chamber with spinning them up to a distance of 60m. So I rate the entire replica highly, especially since I had the opportunity to try it in battle, and it worked very well. It gave me a lot of fun during that day. I'm sure it will accompany me in the fight more than once.

If you are looking for an original SMG replica that will not be the next MP5, I think the PCC45 might be a reasonable choice. You will find this replica in our offer!

Check out the submachine gun available in our offer!