Over 500 new products in the biggest discount zone - DROPZONE!
Sign In Register
Back
Add to compare
Remove products Compare products(0) 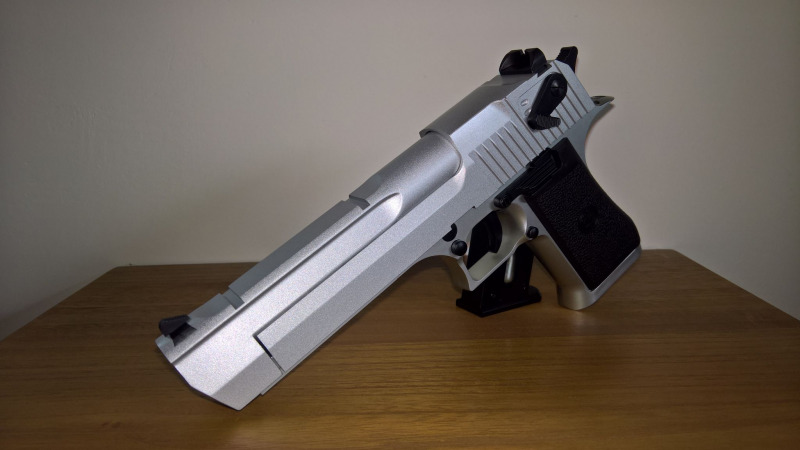 5/5
2020-05-22
Very good gun. It is strong as hell and it has great blow-back. Fps might be even too strong for some games, because it does make 400+ fps indeed, just as described (up to 430 by my measurements, using 0.20g BB's). There are reviewes on the net, that it can only make up to ~350 fps, but the full auto capable version might be different in power. This is not full auto, however the safety on it has 3 clicks, just like that. One for safe and the other two both are for semi. Out of the box the fire selector was very hard to move, almost entirely stuck in one postition, but a little tweaking and it is perfect now. The gun is heavy, but not the heaviest Deagle on the market. I'd say it has a good balance when loaded and you don't want a heavier pistol on your side than this, considering it's size too. Good luck finding a holster for it! Elaboration is very good, it is a nice replica overall. No official markings, but who cares. A single CO2 cartridge will give you at least 2 full magazines to shoot with maximum power, even with cheaper ones. Accuracy is great and it is safe to say, at least 0.25g BB's have to be used on this sidearm, but 0.28's are still good. TL;DR: I love it and you also will, if you buy it!
Kiss, Soskut
Was the review helpful? Yes1 No0
5/5
2016-12-12
This gun is perfect side arm for sniper and scouts. I think for handgun should be gas blow-back, snipers are spring, and the othergun like assult rifel should be electric. This add you back the feeling the real life version feeling. I love this replica. If someone want a sidearm this is his gun. This not for beginers.
Harangi, Felsőzsolca
Was the review helpful? Yes1 No0
There are no reviews with this number of stars.
Write a review
This page uses cookie files to provide its services in accordance to Cookies Usage Policy. You can determine conditions of storing or access to cookie files in your web browser.
Close