We offer you quick and easy shopping in installments without leaving your home. You can apply for a loan online when placing an order.
Calculate installment
Product description
Show description
Reviews of our customers
4.00
Number of reviews issued: 1
Write a review
50
41
30
20
10
Click a rating to filter reviews 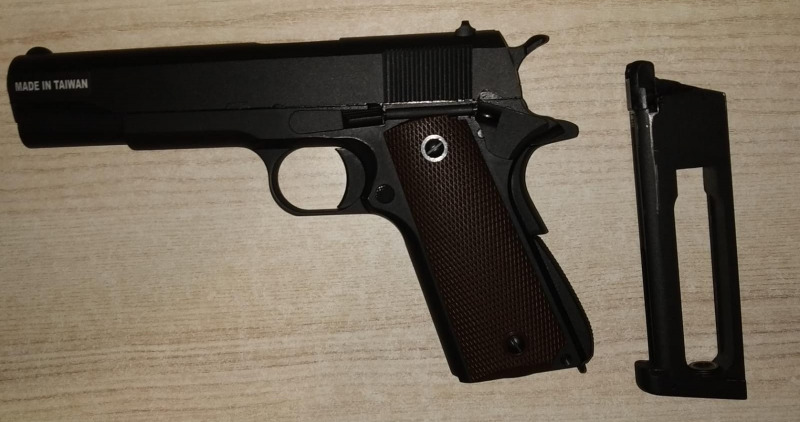 4/5
2021-01-14
First thing you notice is the weight, It is heavy and I like it! In terms of pure astethics and feeling of the gun in your hand it is 5/5. It comes with 1 magazine and manual, which features how to use the gun and open it for hop-up regulation, and all the gun part names ofc. Also a "ad" from KJ works for other guns, which does kind of look nice. There were instructions from Gunfire on how to use GBB/CO2 gun, which were all in polish, but I didn't really need it as I had already searched online about CO2/GBB. The gun gets scratches fairly fast and easy. The Colt already came with a few scratches, most likely from testing, especially on the mag, where the most metal on metal contact is apart from the slide, but you can't really the see the slide as you see the mag, which you need to take out and put back often. I also made some scratches just by shooting it and made the scratches on the mag bigger, but the thing is it makes the gun better looking, even more realistic so that is for me a plus. In terms of performance it is as advertised, atleast for the 3 days I have been using it. It works as the real gun would, kicks back like a horse and you can really feel the recoil. On black target you can't really see the front sight or in dim, dark place/at night. But for distance of 5-15 meters it is pretty accurate (for 5 meters you can shoot right where you are aiming, with adjusting and some feel for the gun, for 10 meters there might be ~mm difference and in 15 meter ~mm to ~cm difference). There was one tiny issue with the mag not securing properly, just needed a bit more force to put it in and it works nicely, altough I did waste like 3 co2 cartridges because of it. (As it is my first airsoft gun and I might of used too little force to put in the mag.) The gun sounds like a real gun would if it was a lot more quiet, in closed spaces you can really hear it, which again make it more realistic. For a collector this would be a perfect addition. For me it is 4.5. Also it is worthy to note that I used it in cold temperatures and it still performed nicely(2 to 2.3 mags for 1 co2 cartridge). The timing I bought the gun wasn't the best, also there wasn't green gas mag for the gun in the shop then (now there is), which I would recommend if you want the gun long term, as it puts less strain on the internals, but again green gas can't take the colder temperatures and doesn't kick as much, so it is nice to have both.
Emīls, Stalbe
Was the review helpful? Yes0 No0
There are no reviews with this number of stars.
Write a review
This page uses cookie files to provide its services in accordance to Cookies Usage Policy. You can determine conditions of storing or access to cookie files in your web browser.
Close