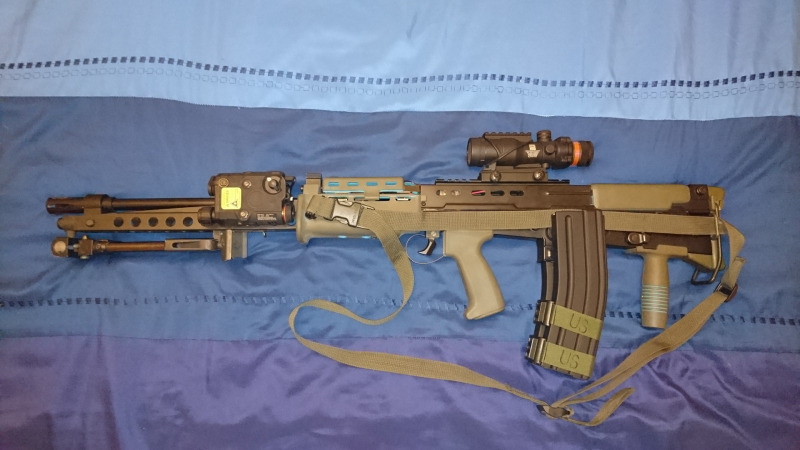 5/5
2018-08-03
I've had this gun for around 4 or 5 years now and it's still my primary choice of weapon. It's a bit of a disappointment the semi automatic fire mode is problematic but this is a known issue with the ICS SA80 series. I've since upgraded my weapon a few times such as adding a tight-bore 6.01 barrel, ICS Turbo 3000 motor as the company in the UK supplied it with the ICS Infinity motor, I use a 3000 bb battery operated mag, rewired it, changed the hop-up and bucking, removed the carrying handle to install an fibre-optic illuminated ACOG and did a little mod to install a picatinny rail mount to add a PEQ. The gun itself has earned a bit of a name for itself as it's satisfyingly accurate with it's 350 fps site limited power, but that said, the ICS gearbox features a 3 step spring compression selector: with the M110 spring I have installed, on the highest setting, currently it will fire at 350 fps. Specific to springs, the increments of the spring adjustments differ. Switching the M110 spring to the middle compression I get 325 fps and 300 fps on the lowest setting. Likewise, upgrading to a M120 spring, if it's firing too hot and is above 350 fps, adjusting the spring to a lower setting might bring it in the range of the 350 fps site limit. Additionally, say the spring you used gave you 350 fps on the lowest setting, you can get more life out of the spring but setting the spring higher is the fps starts to drop. The ICS SA80 series all feature this gearbox design. Overall, not a excellent rapid rate of fire compared to other weapons, but as I usually run it in full auto bursts with the 3000 bb mag, It's one of the choice weapons for a support gunner, fire sustainability, accuracy and relatively lighter that a lot of the other support weapons, hence it's name The LSW, the light support weapon.
Michael Christo, Middlesbrough
Was the review helpful? Yes0 No0
There are no reviews with this number of stars.
Write a review
This page uses cookie files to provide its services in accordance to Cookies Usage Policy. You can determine conditions of storing or access to cookie files in your web browser.
Close