The AK 47 - the Kalashnikov assault rifle, is a cult-status product of Soviet thought. Even if some of you don’t know its exact design and history, almost everyone is familiar with the name - the rifle “acted” in so many movies and series - especially those about the USSR period of time. It’s this period that witnessed the birth of the AK 47 automatic rifle, named after Kalashnikov - its designer.

However, the rifle is not really called Kalashnikov or AK 47 - although both of those monikers function as common names, but simply - AK. By now it’s been in use by every army in the world, modernized and adapted many times - and of course it has its own airsoft gun version! Thanks to this, everyone can have an AK47 in their collection - as long as you choose an airsoft rifle perfectly imitating the design of the AK kbk.

How and when was the famous Kalashnikov AK 47 created? Short history lesson

The AK 47 assault rifle was created thanks to the desire to manufacture and introduce into military use weapons designed for intermediate cartridges. The first attempts were made in the Soviet Union in the 1930s, but were interrupted by World War II. The idea was picked up again even before the war ended - in 1943, when Russian scientists completed their works on an intermediate cartridge - caliber 7.62 x 39 mm. Immediately after, a competition for a standard firearm for the Soviet Army was announced, and so began the long history of numerous attempts to create an automatic weapon, utilizing an intermediate cartridge. A history in which many obstacles were encountered; a story that almost ended in failure. 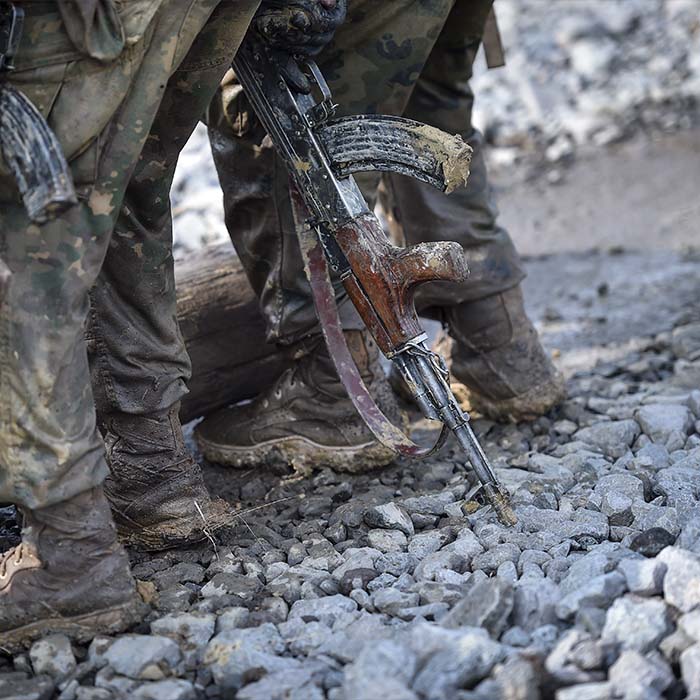 The new automatic rifle was supposed to be relatively compact and light, and, of course, very functional. Various designers tried their hand in designing such a weapon, but their ideas were constantly rejected. At a certain stage of the works, an assistant was assigned to one of the scientists - this assistant was named Mikhail Timofeevich Kalashnikov. In 1946, a competition was announced again: for a rifle with a folding stock and a rifle with a fixed stock. Mr. Kalashnikov received an award for his individual design and was assigned as head of the team that was to refine it.

A year later, field trials began, using 5 prototypes. Almost none of them passed the tests, but the members of team Kalashnikov used their contacts and were given another chance, allowing them to enter the next competition. The following years were spent on further attempts to construct the perfect weapon, which finally bore fruit in 1949 - it was then that it was decided to start the production of the AK rifle with a fixed stock and the AKS 47, with a folding stock.

Kalashnikov received the 1st degree Stalin Prize for his work, but this does not mean that the project was considered as closed. It was constantly improved, undergoing numerous modernizations over the years. New models were created. However, what has always been characteristic of the AK rifles, is their durability and resistance to damage as well as any pollutants. Since its inception, it has been used in almost every military conflict, being an extremely reliable weapon and, at the same time, very easy to handle and cheap to manufacture. 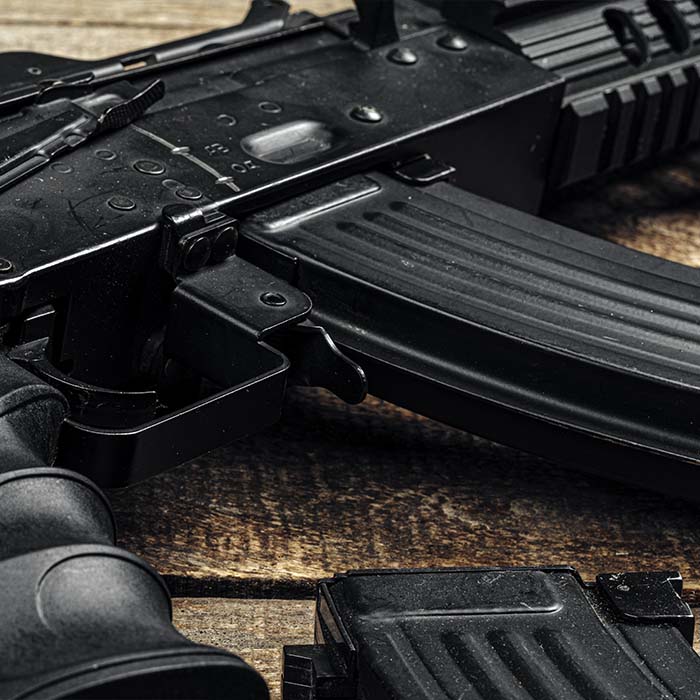 Construction of the AK 47

The Kalashnikov is an automatic - semi-automatic weapon, in which the gases are discharged through a side opening in the barrel. It uses 7.62 x 39 mm or 5.45 x 39 mm ammunition (let’s stick to the basics and associate 47 with only one caliber) - depending on the model. The box magazine is replaceable and holds 30 rounds. The AK stock can be fixed or foldable, and the rifle is equipped with a pistol grip. 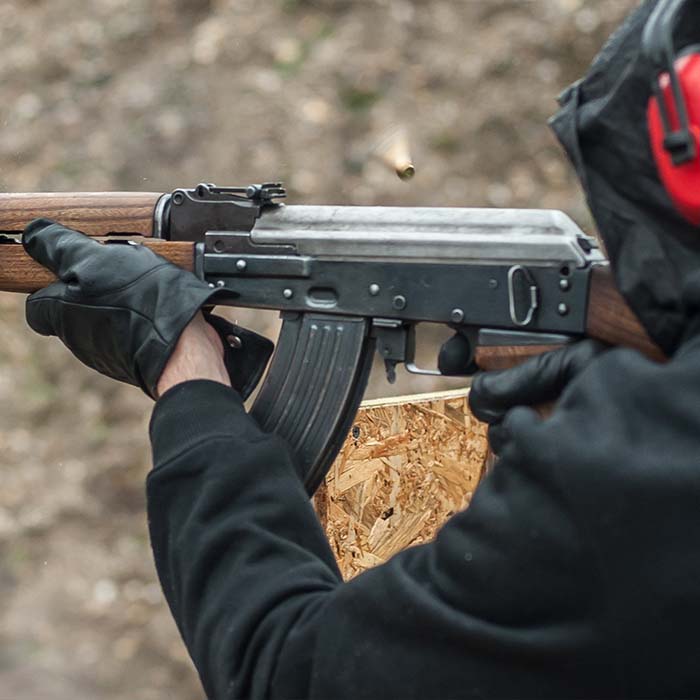 The AK47 possesses numerous advantages, but it’s not a perfect weapon - and so, its design has undergone has been modernized and improved many times over the years. The results were new weapon models, the most common of which is the AKM rifle. It features minor, but at the same time key, changes that made mass production even easier. The AK 74 is another Kalashnikov caliber 5.45 x 39 mm version, created in the 1970s. It is a small-caliber weapon, which even today serves as the basic rifle in the Armed Forces of the Russian Federation - of course in a more modern form.

The production of the AK has gone on uninterrupted since the introduction of the first model of the weapon. This rifle is still used today by many armies around the world, including the Polish Army. The design is constantly developed, as evidenced by the works on the AK-12, which is supposed to replace the AK 74. 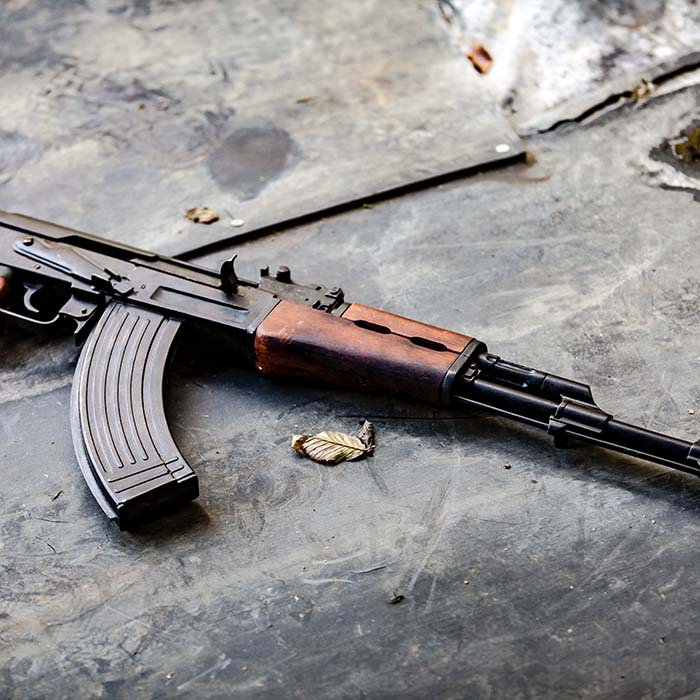 The Kalashnikov is one of the most popular weapons all around the world, so it’s not a surprise that various types of AK 47 airsoft rifles have also been designed. Airsoft battles are just one of their uses. As it is a weapon accompanying many historical events, AK 47 airsoft rifles are also used in various historical reenactments. The price of a given kbk AK airsoft rifle depends, among other things, on how well it imitates the real firearm, what materials were used in production and the mechanisms that affect its functionality. Cheaper models will be made of plastic; in more expensive ones, manufacturers use metal, steel and wood. 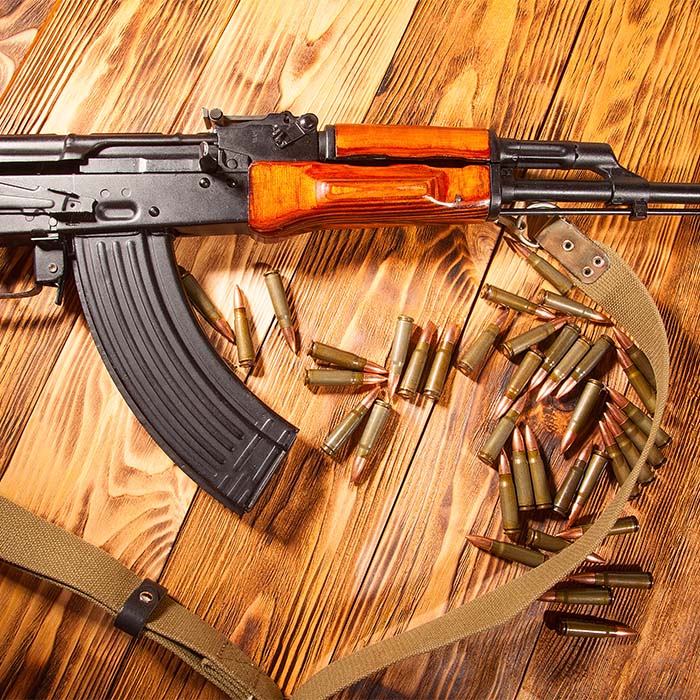 An AK 47 airsoft rifle can be spring, gas or electric powered. Spring airsoft rifles have the simplest designs, they’re also the least realistic, since they need to be reloaded after each shot. If you want your airsoft rifle not only to look like the original, but also to provide a realistic experience, we recommend choosing an electric AK airsoft rifle. It allows single as well as continuous fire, making it suitable for various engagement scenarios.