DSG / TSG - what kind of modifications are these?

Have you ever wondered how to explain the operation of a gearbox in an airsoft gun? The system of gears changes the movement of the engine in such a way as to move the piston of the gun backwards in the cylinder so that when it is released, it compresses the air and pushes it through the nozzle to drive the BB. A large simplification, but enough to consider what factors affect the rate of fire. How quickly the airsoft gun reacts with a shot to pressing the trigger and with what frequency it will fire in the auto mode will depend on how quickly it can pull the piston from the starting position to fully cocked position just before the shot. We can improve this in several ways. First of all, we can change the replica's engine to one that will turn at a higher speed and transmit this speed to our gears. We can also use such a set of wheels, the ratio of which will make the piston move faster despite the slower engine operation. Similar to bicycle gear set. As standard, most airsoft guns come with 18:1 ratio modes. The use of such with a ratio of 16:1 or, for example, 13:1 will increase the rate of fire of our airsoft gun. 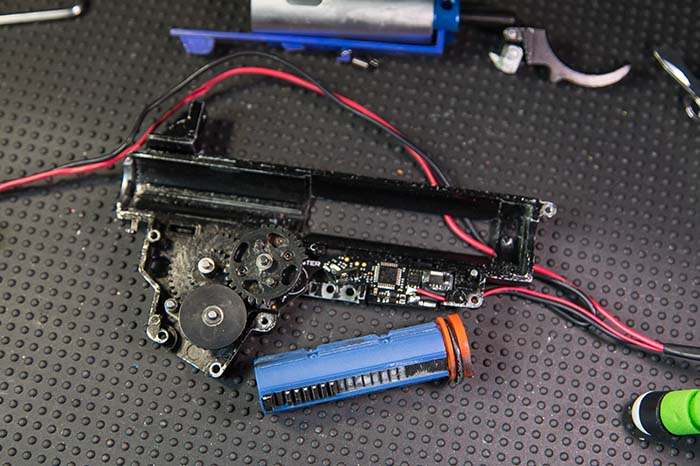 The methods presented above have their limitations. A faster motor may not have enough power to drive a piston that is held in place by a stronger spring. Similarly with the gear ratio. The use of a "faster" system will require a high torque motor. Otherwise, it may heat up or, in an extreme case, be damaged. We certainly must not forget to supply enough voltage to our airsoft gun. 11.1 V batteries will surely provide us with a higher rate of fire than 7.4 V. However, the modifications discussed in this article try to address this problem from a different angle. What if, instead of trying to force the piston to travel faster, we just shorten its path? 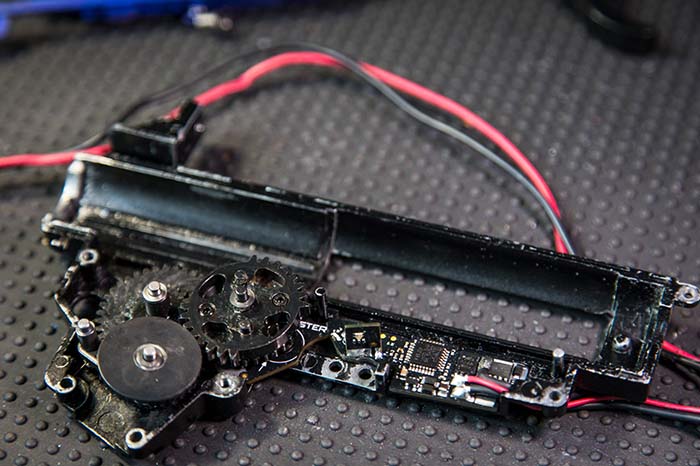 DSG, TSG and short stroke in essence are modifications that are based on a similar assumption. By doing them, our goal is to increase the rate of fire of the airsoft gun and improve the response to the trigger by shortening the piston path in the gearbox. We achieve this by reducing the number of teeth on the piston gear of our replica and on the piston itself. This will basically be a gear shift on our set of gears, as I have already mentioned. However, instead of equipping our airsoft gun with a system that changes the number of teeth on the entire set of wheels, we will mainly change their number on the piston rack, i.e., the one that directly drives our piston.

Starting with the simplest modification, we have short stroke first. In this modification, we saw-off the teeth on the gear we already have and remove the same number of teeth on the piston. Subsequent modifications, those that are the main topic of this article, will require us to obtain the appropriate type of a piston gear. DSG, or Dual Sector Gear, is a wheel that has, as the name suggests, two sectors. These sectors are the parts of the gear that drive the piston of the airsoft gun. So, when we have two sectors, we can say that for one full revolution of the wheel we drive the piston twice. On the other hand, such a wheel has two protrusions on the bottom which, acting on the cut-off level of the gun, initiate the closing of the gearbox cycle. In replicas equipped with MOSFET optical systems, these elements, instead of pressing the cut-off level, are detected by optical sensors, which in turn also leads to the end of the work cycle.

TSG stands for Triple Sector Gear. The operation of such a gear is analogous to the DSG, but instead of two sectors, there are three of them. One revolution of such a wheel drives our piston three times. I hope it is not difficult to understand why such modifications improve the rate of fire of our airsoft guns. The significant reduction of the piston distance, even at relatively slow engine revolutions, makes the cycle time shorter and we push the BB out of the barrel faster through our nozzle. However, while DSG already has a piece of the airsoft market, TSG remains in the sphere of extreme modifications. 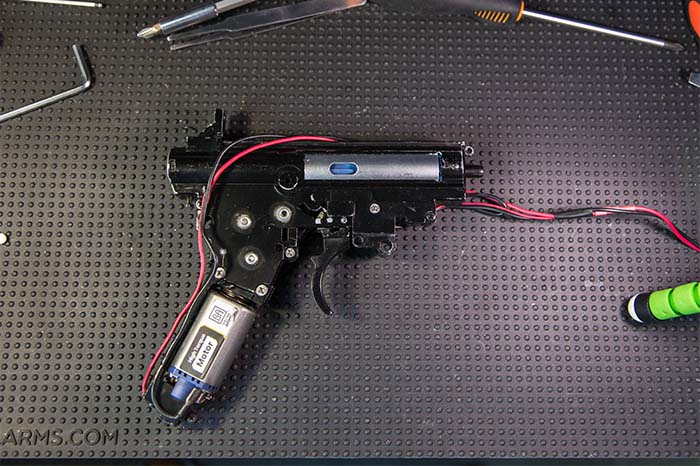 Why does not everyone do it?

It would seem that the modifications discussed could be permanently sold in the factory standard replicas offered by the manufacturers. Maybe not necessarily for budget series of airsoft guns, but maybe for higher models. However, it is difficult to find guns equipped with DSG straight out of the box. Why such restraint among gun companies? I will be the first to admit that such a modification is, firstly, difficult and, secondly, it may not be durable. On the scale for which airsoft guns are produced, there are easier and less demanding methods of increasing the rate of fire and response to the replica's trigger. From the perspective of the manufacturer, it may be easier to introduce a more powerful motor or install a MOSFET in series of guns. DSG requires the proper selection of not only the gear on the piston, but, in fact, the entire set of wheels. For this, you need to shorten the nozzle tappet plate accordingly and use a stronger spring that drives this bar. Modification requires a replacement of the engine anyway, and most often requires the use of a stronger spring, because the shortened piston path does not use its entire length to create momentum in the air compression phase in the cylinder. 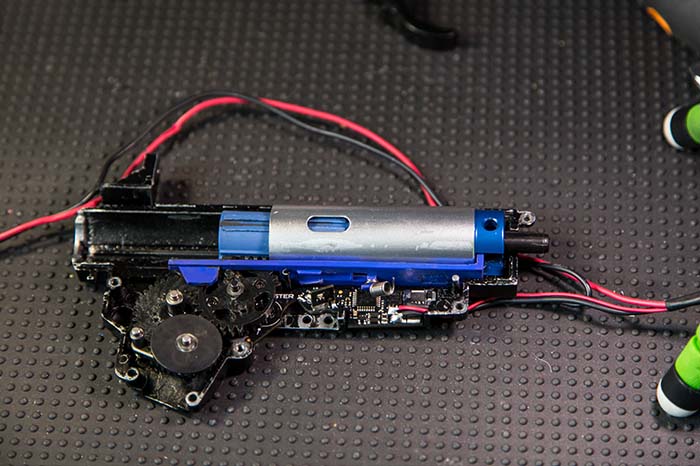 It used to be unimaginable for a replica to be factory-equipped with any electronics. Over time, we have models equipped with ordinary MOSFETs. Recently, airsoft guuns with advanced optical control units have become more and more popular. It was similar with the quick spring change systems. Now even cheaper series of guns are equipped with such facilities. I believe that the modifications discussed in this article will have a similar fate over time. In some time, manufacturers will certainly develop a proven method of assembling DSG already in the factory, striving to distinguish themselves from the competition. Modifications increasing the number of sectors of our piston wheel certainly have their place and as a user of a DSG gun I must admit that sometimes I miss the trigger response when I take a traditional airsoft gun for a shoot.