Red dot or magnified optics?
The presence or absence of the electric or classic optics on our airsoft replicas was always the topic of lots of the heated discussions on forums. The market extends its offer everyday and the poor airsofter is going crazy, because of too many possibilities – he doesn’t know what he wants anymore. In this entry I’ll tell you something about the actual possible solutions and add my personal commentary to each one.

Aiming “by the BB’s”
I just had to mention it – practically, each one of us knows someone, who does this or was that kind of person or even is that kind of person. This method, theoretically is potentially quick and kinda efficient, but only theoretically. What is very important for me, this kind of aiming makes one to learn very stupid habits, and even the incorrect shooting stance. That’s not what we want ;) The other con of this method is the fact, that aiming with the bb’s requires actual bb’s to aim, so the first shots aren’t that accurate as they could be. Of course, the muscle memory does its job, the practice with your replica too, but try to get an accurate long range shot without several bb’s sent for the aiming purpose. 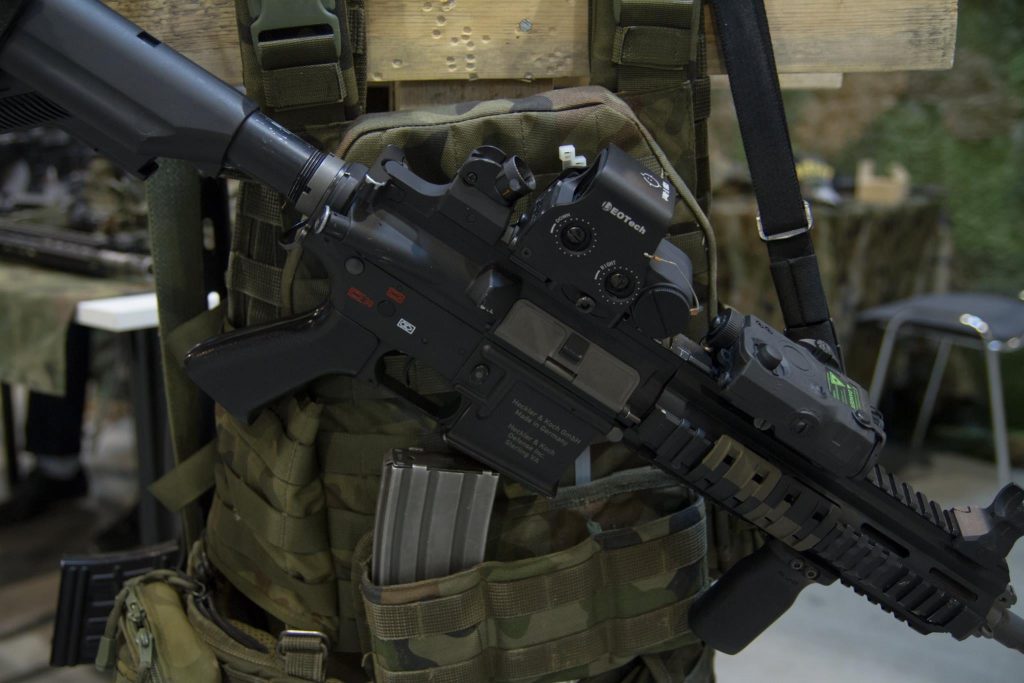 Red dot sight
Red dot sight is probably the most popular electronic optics used on for fights on the short and medium ranges. In CQB it performs outstanding, giving the user an excellent reaction time and great comfort and simplicity of the maintenance – you only need to worry about the batteries. The bb go just straight to the visible red dot. Thanks to the aiming with both eyes open, we don’t lose any of the very important field of view. Talking about the medium range firefights, there exists an unfortunate syndrome of “hey man! I had you on the red dot!” – the home-grown commando is completely convinced that his replica shoots perfectly straight on any range. I think, there is no need to say that in most of this situations the bb’s are falling right in front of the potential cheater.

Skipping the aspects like the division of the open and closed type red dot sights, it is worth to look for the aiming reticle that suits your own needs – you can have a simple dot or something more complicated, like a circle with drop points, which can be very useful in our airsoft conditions. Another pro of that type of sight is (usually) the feather light weight and a little size, that doesn’t take too much place on the carbine rail. It is worth to remember, that when fighting in the woodland environment, the red dot sights aren’t that helpful in spotting camouflaged enemies, because of the lack of magnification.

Pros:
+ quite cheap
+ great for close quarters
+ they don’t require that precise shooting stance to aim (less parallax effect)
+ thanks to the aiming with both eyes open, it gives a wider field for observation
+ they don’t need to be placed directly near the eye

Cons:
- no magnification for short and medium ranges
- the “fictional universality”
- you need to maintain the batteries properly 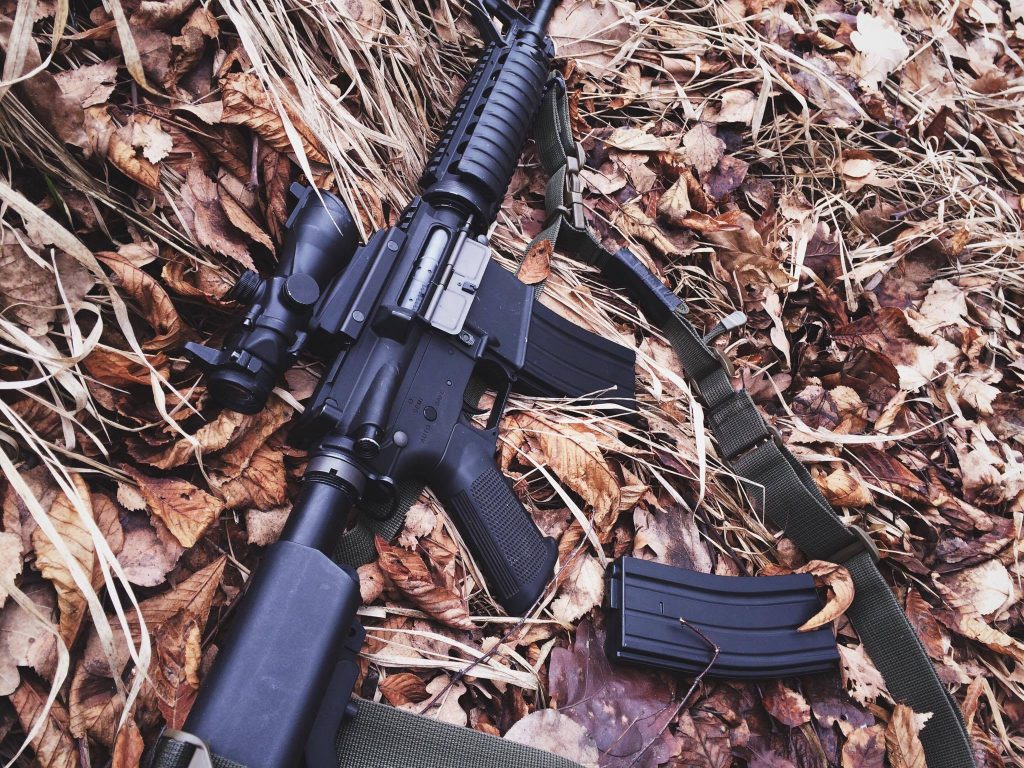 The optics with fixed magnification
Completely different solution than the red dot sight. With the loss of the aiming speed and most of the field vision, we gain a great opportunity to observe the terrain, enemy and even the trajectory of our bb’s – and frankly, this gives a lot of advantage in the airsoft reality in the green fields. We are talking about the assault rifle replica, so forget about magnification higher than the x4 or x6. The x4 magnification makes the ideal compromise for terrain observation and having bb’s firefight on medium and long ranges.

Except for the cheap scopes with simple cross and x4 zoom, which take a lot of place on the rails, there are also the Trijicon made (ACOG) and the Elcan (both the classic one and the Specter DR) optics replicas. I’ve used both a few ACOG and Specter DR copies and frankly, I can say that much good about the ACOGs. They have clear vision and proper magnification, but they require your eye to almost lay on its glass in order to see anything different from black tunnel. For example, they are completely unusable in Tavor replicas, same thing can happen if you use back-up rear sights. When it comes to the Specter DR, things are drastically different. You can aim pretty fast for a magnified sight, and with a little practice you can learn to use it with both eyes open. On the other hand, some of the ACOGs have the illuminated crosshair, when the Specter replica illumination doesn’t work properly even on cloudy days (there is practically no difference).

Pros:
+ great for further observation of the terrain
+ makes it easy to follow the trajectory of bb’s on the long range
+ they work even without the batteries

Cons:
- heavier than the red dots
- require some rail space
- quite useless on the short ranges
- the price 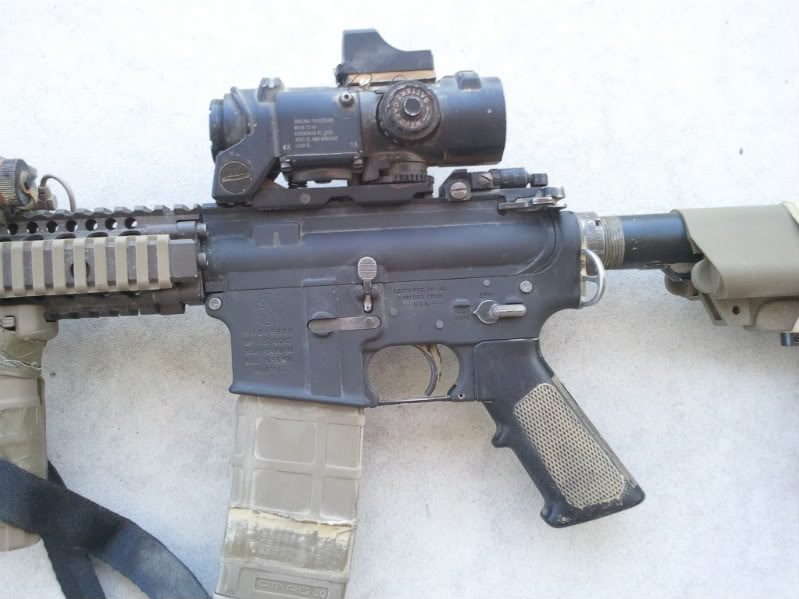 Źródło: Photobucket.com (profil Smoke81Vencel)
Fixed magnification optic + small red dot
The situation is quite similar to the one explained above, but now we put on our ACOG/Specter an extra red dot sight (a Docter, RMR or micro T1 copy). Theoretically, the weight increases again, but frankly – does it really matter when you already have a 0,5kg Specter? Finally, with that solution comes the universality – micro red dot for CQB, and scope for medium and long range. You don’t need to regulate anything – you just move your head to the second optic. On the other hand – higher line of aiming means bigger target for your enemy, and we all perfectly know how the lost bb’s work in this kind of situation.

Cons:
- weight
- price
- high line of aim
- you need to remember about the batteries for little red dot 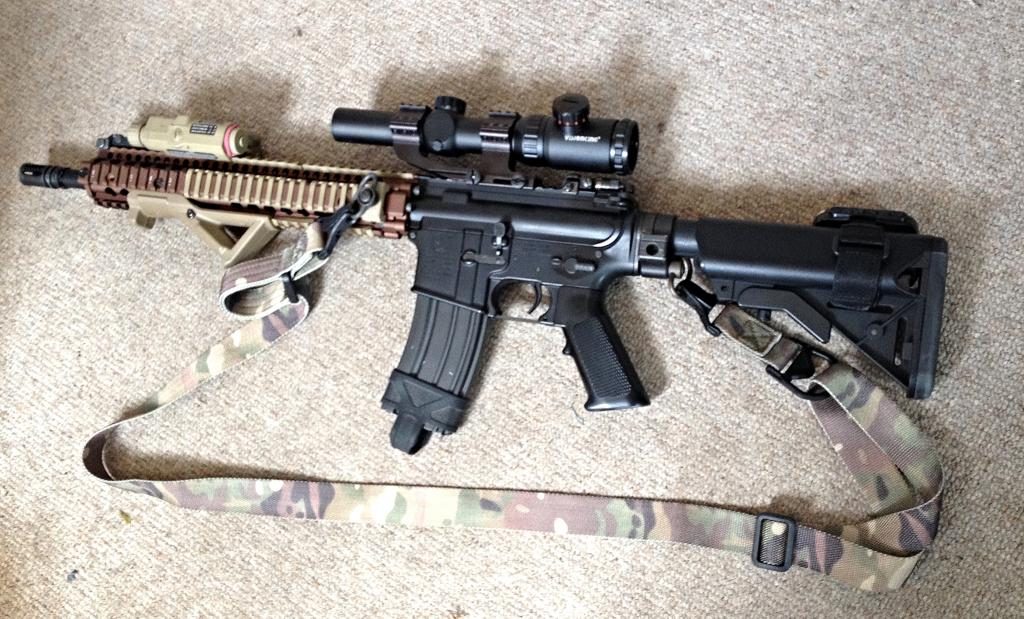 Źródło: airsoft-forums.co.uk
The optics with changable magnification
For me – it’s incredible. This paragraph is about the Shortdot scopes. Shortdot is a scope with regulated magnification between the x1/x1.25 and x4/x6 value. The crosshair is no longer the traditional one, but something more like a hybrid of mildot with the red dot type crosshair – which makes it work practically like a red dot when on it’s on the x1 adjustment. The difference between shortdot with no magnification and red dot sight is just marginal. From this category, I wouldn’t recommend the x1-x4 Specter DR copies, because they don’t work properly.

Pros:
+ universality
+ one piece of gear with many uses
+ no high line of aim, in opposite for the fixed magnification + red dot combo
+ comfortable aiming reticle
+ works even without battery
+ smooth adjustment

Źródło: militaryblog.jp
Red dot sight + magnifier
The last solution that guarantees the universality of your assault replica. You place the x3 magnifier with the special flip-up mount behind your red dot (most frequently the Eotech or Aimpoint replica). Depending on the needs – flip it on the red dot for the magnified view, and flip out for the standard view. Theoretically, it works a little faster than adjusting the zoom in the shortdot scope. If you’re going for this combo, I would recommend to pay a little more and buy the Eotech G33 replica – thanks to the adjustment screws it works a lot better than the old gen copy. The red dot + magnifier takes a lot of rail space and weighs well, but if you already have a red dot sight – you only need to buy a magnifier for it, which is a smaller amount of money spent, than the shortdot or fixed scope.

Cons:
- size!
- price (if you’re buying the whole combo at once)
- the need of taking care of batteries
- flipped out magnifier is blocking some of the side view

To sum it up
Knowing the pros and cons of each solution and your own personal needs, you should be able to easily and quickly make the decision which options suits you best. In case of playing mostly on CQB fields – there is no point of magnification, you should get a red dot that guarantees the precious milliseconds of reaction. This type of optics also almost doesn’t have the parallax effect, so aiming is as simple as looking at the red dot.

If you’re more about the woodlands – get something with magnification. It is worth to sacrifice some of the comfort coming from weight of our gun for a greatly wider spread of possibilities in the forest terrains, where people are using the advantages of their camouflage and aren’t that easy to spot without zoomed optics.
Show more entries from October 2017
This page uses cookie files to provide its services in accordance to Cookies Usage Policy. You can determine conditions of storing or access to cookie files in your web browser.
Close