Airsoft shotgun - how to choose an ASG shotgun and what to look out for?

Choosing an ASG is no easy feat - the variety of types and models, with various characteristics and features, can be overwhelming. Especially when buying your firs ASG weapon, beginning your airsoft adventure and not being very savvy or entirely certain of the direction of your future ASG development. In this case it’s better to go for a cheaper and simpler option - an ASG shotgun. But how to choose the best airsoft shotgun and what to keep in mind when making a decision?

What are the uses of a real-deal and an ASG shotgun?

Shotguns are a very specific type of firearm, widely recognizable due to their appearance in many movies and TV programs. Especially those from the previous century, as the history of the shotgun is very long, dating back to the XVI century. It’s during this period that first smoothbore rifles were designed - precursors to the shotgun. Modernized in our times, weapons were designed with more capacious magazines, greater range and continuous fire capabilities. And yet, shotguns are still in use to this day. They’ve found their place in the equipment of police forces, used as tools of crowd control - loaded in this case with rubber shells. They are also used as assault shotguns, for breaching doors and gaining entrance to buildings. Shotguns are also used in sports competitions and for hunting. As you can see, shotguns are a very important piece in the history of firearms - and thus, it’s no surprise that they’ve found their way into the world of ASG. An airsoft shotgun might serve as a historic, collectible piece, but also as a weapon in certain ASG scenarios. And sometimes it’s also the best choice when purchasing your first ASG weapon.

Its construction is simple enough, making it cheaper than more elaborate pieces. It’s easier to handle, which is a very important factor in case of ASG beginners. Its performance is usually reduced, so the airsoft shotgun is used only in certain types of airsoft battle scenarios. There are several types of airsoft shotguns available, differing in build and mode of operation. Let’s take a closer look. 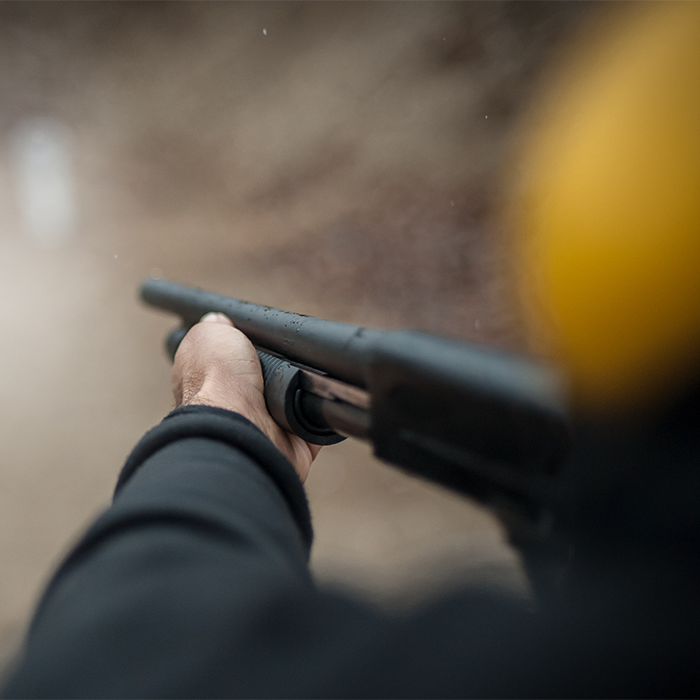 Types of real-life and ASG shotguns

Shotguns can be divided by many varying parameters, the most important in case of airsoft shotguns being the number of barrels. A single barrel shotgun has a single inner barrel and can be loaded with a single shell. A double barrel shotgun consists of two parallel barrels and is capable of firing two projectiles at the same time. And that’s not all! The ASG shotgun arsenal also includes three-barreled shotguns!  A three barrel shotgun can fire three bullets at once - like the Cyma CM350LM shotgun. It’s a way to realistically imitate the behavior of actual buckshot, making this type of ASG shotgun deadly efficient in case of CQB battles in small spaces. Shotguns can also be distinguished by the type of installed mechanism. A single-action shotgun can be loaded with just one bullet at a time. Action mode has been improved in pump-action shotguns, equipped with a magazine. Both types of shotgun operate in single fire mode and require reloading after every shot. ASG shotguns usually imitate the characteristic pump-action gesture, increasing the realism of the experience and providing greater satisfaction of use. There are also semi-automatic and automatic ASG shotguns available on the market, the latter requiring no reloading. The user can shoot until the magazine is empty - single fire in case of the semi-automatic and continuous fire in case of the automatic shotgun. 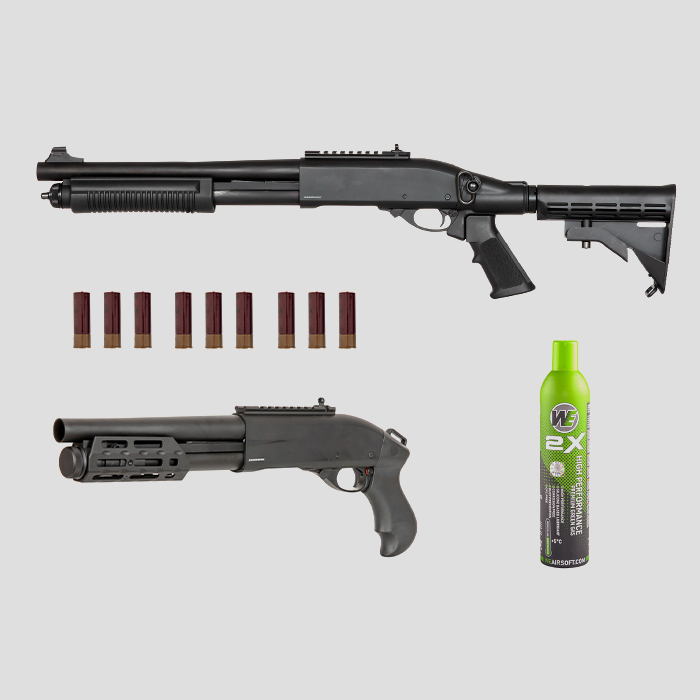 Airsoft shotgun and the type of power

In case of airsoft shotguns, an important differentiating factor lies in the type of power source. Most airsoft shotguns are spring-powered, but airsoft gas shotguns are also available on the market, powered by the popular green gas or CO2 cartridges. The latter type is a little more complicated in use, being a specialty of, for example, the Japanese Tokyo Marui ASG manufacturer - with the Remington 870 shotgun, an American flagship shotgun, as a common basis for imitation. One example of this type of ASG shotgun is the Tokyo Marui M870 Wood Stock Type shotgun, characterized by high quality and increased performance. It comes equipped with three inner barrels, which shoot not three, but six pellets at once. However, airsoft gas shotguns require some experience and skills. They are also more costly - that’s why they’re recommended for more advanced airsoft enthusiasts.

An airsoft shotgun is commonly used in historic reenactments, where factual factors are of great importance, such as types of weaponry used during a particular engagement. Also, no firearm collection, put together by any weaponry afficionado, can be complete without an ASG shotgun. The shotgun has a specific look to it, with older models being finished with wooden elements - that’s why an airsoft shotgun can make a fine piece to display in a wall-hung cabinet. Many models of ASG shotguns are also relatively cheap, facilitating easy collection of historic weaponry.

A tactical shotgun can also be used in airsoft matches. However, due to its specific action, it won’t work in certain conditions. It needs to be reloaded before each use, influencing the pace of battle and reducing the chance of successfully eliminating the opponent. An airsoft shotgun usually has reduced muzzle velocity and limited range. This can be a serious disadvantage in case of large, open arenas. However, a disadvantage in certain conditions can offer advantages in others. Limited performance and lesser muzzle velocity, along with smaller size of the ASG shotgun, will come in handy during CQB engagements, organized in closed spaces, with limitations being enforced by organizers, with the safety of the participant in mind. An airsoft shotgun is a great choice for this type of scenario.

Choosing an airsoft shotgun based on budget

Seeing as most airsoft shotguns are spring-powered and simple in terms of construction, purchasing your own piece won’t ruin your budget. An ASG shotgun can be bought for as little as some 40€, making it a great choice for people who don’t want to spend too much and, at the same time, get acquainted with ASG. If you’re at the beginning of your airsoft adventure, one example of such affordable piece is the Mossberg 500 ASG shotgun by CyberGun or the ASG MP003A shotgun, a replica of the Mossberg 590. Of course, there are more expensive ASG shotguns available on the market, equipped with more advanced gas systems and additional mechanisms and elements that additionally increase the price. Higher price might, but not necessarily has to, influence the performance of a given air soft shotgun or the quality of its manufacture. Each model should be considered individually.

The best airsoft shotgun and how to choose it?

The choice of the best airsoft shotgun for you depends mainly on you budget and what you plan to use it for. If you’re a collector and the ASG shotgun is meant as another piece for your collection, the looks and perfection of imitation of the original will be the most important factors. Type of action and performance will play no role in this scenario, so even a basic spring-powered ASG shotgun should suffice. However, if you plan to put your ASG shotgun to use in an airsoft battle, you must carefully study its parameters. Muzzle velocity is very important, influencing the range of your weapon. Also pay attention to such elements as: the hop-up system, magazine capacity and quality of make of individual elements. They’re all of great importance in the heat of ASG battles. An airsoft gas shotgun is more expensive and thus recommended to more experienced airsoft enthusiasts, who’ll know exactly how to use it on the battlefield. A combat shotgun of this type might come in handy, but only if you know how to plan its tactical application. 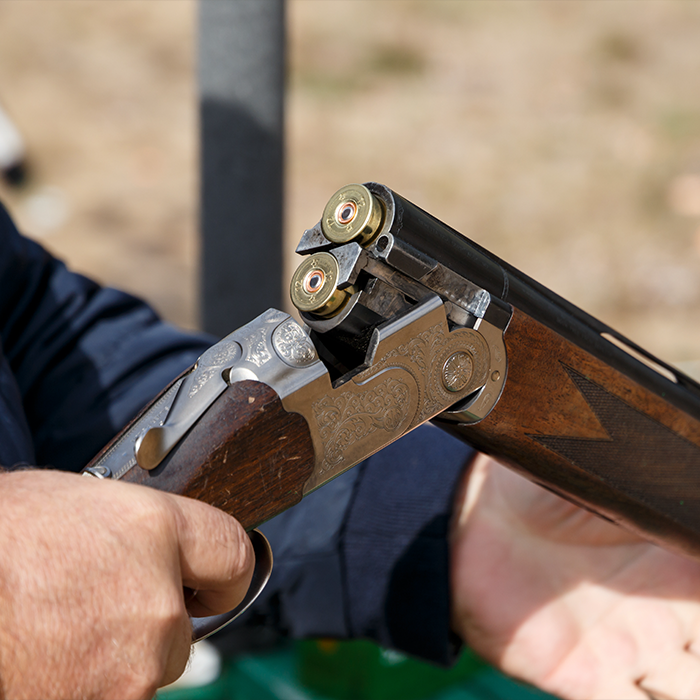 Who is the airsoft shotgun meant for?

Using airsoft shotguns is definitely an interesting experience, due to the necessity of reloading. This increases the realism of the experience but, at the same time, influences the pace of the battle. That’s why ASG shotguns are not the most popular weapons in the airsoft arsenal. However, they’re a perfect choice for beginners, for various reasons. A spring-powered ASG shotgun is relatively cheap, making it a perfect learning tool - and should you find out that airsoft is not your kind of activity, you won’t have lost a lot of money. It’s also a great option for airsoft shooters specializing mostly in CQB battles. As you can see, airsoft shotguns have a variety of applications. The choice is up to you!

Browse our selection of airsoft shotguns!