I can't imagine a sadder sight than the cracked gearbox shell. I have damaged both the teeth on the piston and the gears themselves more than once, but it is probably the shell in which we install the airsoft gun's internals that is the most difficult for me to replace. Even taking into account the differences in the dimensions of the parts between manufacturers, replacing the pneumatics or the gear system is relatively simple. Simply put, these parts stay inside the gearbox and we are not interested in their fitting outside of it. The shell itself, on the other hand, must fit practically every other part inside it, as well as the airsoft gun itself. This complicates the matter to a large extent and gives a lot of importance to the process of selecting this part for our airsoft gun.

In this article I will analyze the replacement of the gearbox skeleton with a new reinforced CNC V2 Specna Arms Edition gearbox skeleton from Retro Arms. We will use a Specna Arms E14 airsoft gun as a guinea pig. It is a representative of the popular Edge series. Although in my copy the serial frame is very good, as a prophylaxis I will equip it with a new CNC frame. It will be a good opportunity to check if this part will fit easily. Remember that within the same series, Specna Arms airsoft guns should follow the same dimensions and standards, so if you also have an Edge gun, you should have similar experiences in assembling the described part. My airsoft gun was serially equipped with a contact block and MOSFET GATE X-ASR. On the occasion of this modification, I will also add the GATE ASTER module. I recommend that you consider installing a similar system when replacing the gearbox skeleton. It will definitely improve the experience of using the airsoft gun. If you do not want such a modification, the standard contact block should work very similarly. 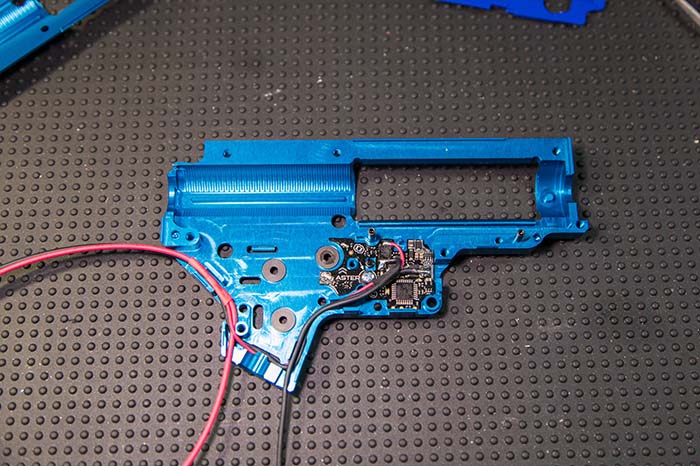 I will not hide. Replacing the entire gearbox shell is a complicated and time-consuming job. Especially for not very experienced airsoft tinkerers. We have to prepare to remove the gearbox and absolutely all parts inside. For this we will need tools such as hex and torx keys. Phillips screwdrivers and pliers will also come in handy. I also recommend the preparation of small tweezers and an upholstery knife. Additionally, we will need resources such as airsoft specific grease, paper towels, isopropyl alcohol and gearbox washers. A few ear buds and a paper tower will also come in handy.

Take some time as well. I am not a skilled service technician and I do not repair airsoft guns professionally, so you can say that I am a representative example of a home DIY enthusiast and the whole process took me about 3 hours. The organization of work on airsoft guns is also facilitated by a good service mat. I use the one from Specna Arms and I can't imagine working without it now.

The first step to replacing the gearbox shell in our airsoft gun will be to remove the whole mechanism from the gun and disassemble it as the first step. If you encounter a problem with this, I recommend checking out the review of the Edge series guns prepared by Maniek44. There is always a brief explanation of how to get inside the airsoft gun. The process of disassembling the gearbox itself can be seen as a speedy montage on the GATE video illustrating the assembly of the ASTER system. 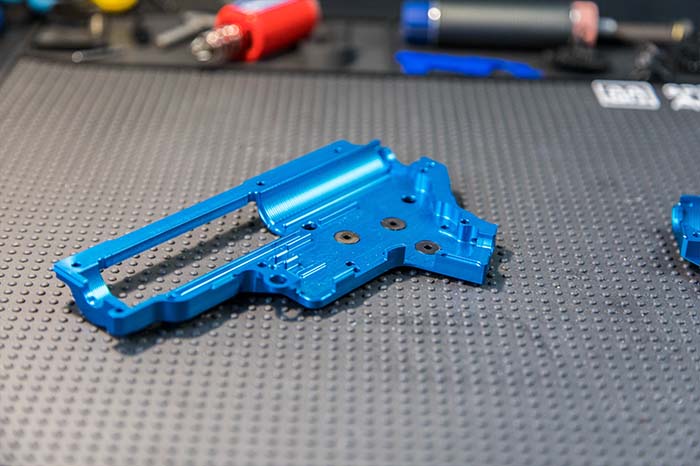 The reinforced CNC frame of the V2 gearbox that we assemble today comes to us without bearings. So, we have to take them from our old system or buy new ones. For my part, I recommend Retro Arms bushings due to the fact that they fit very well into the holes in the GB we mount. This helps to avoid having to fit the bearings and eventually sticking them into the shell. The next step is to shim our gears. A trained eye will notice that the photos show different wheels than the stock ones from the Edge series, but I also checked them. They fit without any problem. The next step is to install the trigger assembly or, in my case, the electronic system that controls the gearbox. I chose the GATE ASTER, thanks to which the airsoft gun gained a number of functions that are useful in my opinion. 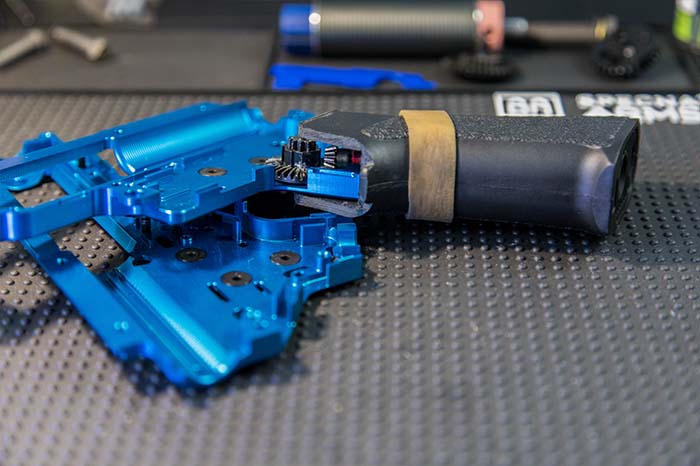 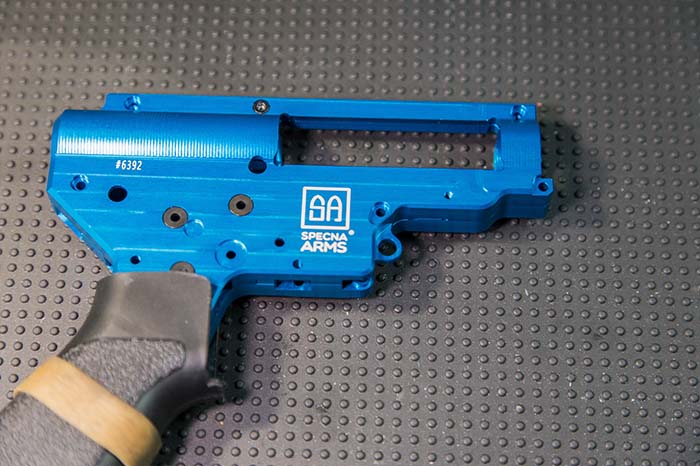 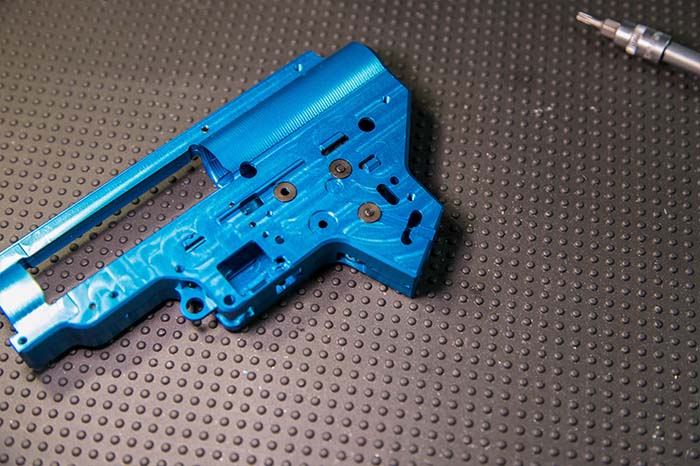 If you move the pneumatics entirely from an old airsoft gun, you shouldn't run into any problems. The standard cylinder and head assembly fitted to the Specna Edge fits correctly, even though it appears a bit loose at first glance. In this rework, we shouldn't have to worry about choosing the length of the nozzle. The one that worked for us in the stock gearbox will also work here. It is worth mentioning that the pins to which we attach, for example, the tapper plate springs or those controlling the operation of the trigger assembly, must be screwed into the gearbox by us. They are included in the set and we can easily assemble them with, for example, pliers. 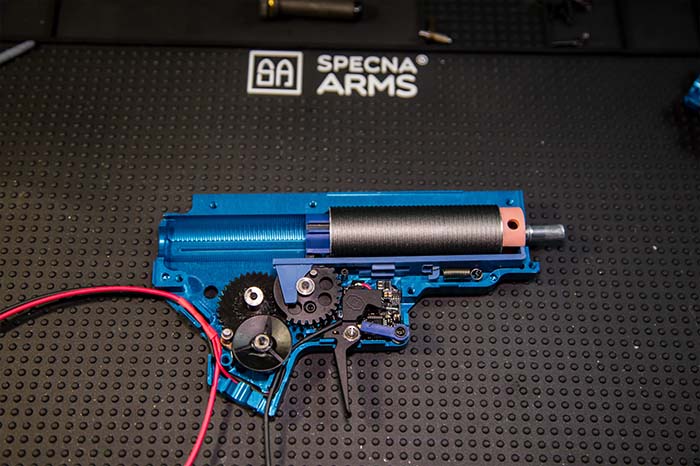 The spring guide turned out to be a minor problem for me. It seems to be slightly larger than the one fitted as standard in Specna Arms Edge replicas. For this reason, I had to enlarge the hole for it a bit in the airsoft gun's body in the place where the stock guide is fitted. It took some work with a good quality file and shouldn't be a problem for someone with basic manual skills. Additionally, if we do not need the spring replacement system without removing the gearbox, we can skip this step. However, I believe that such a function is needed in my replica and I preferred not to give up on it. I have not found any information that others have similar problems, but at the time of writing the gearbox skeleton described is quite a new product. 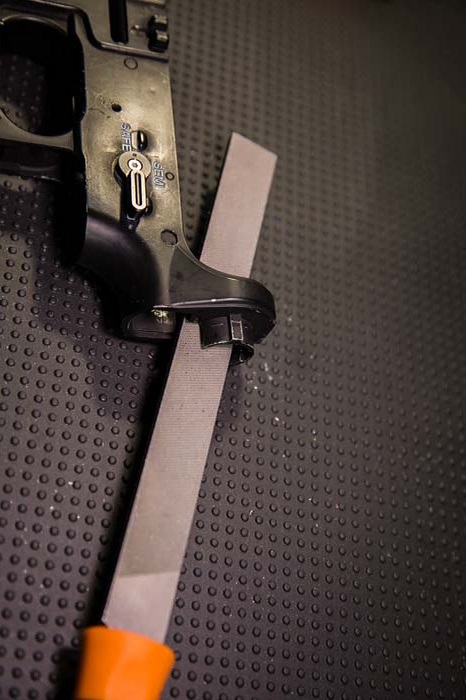 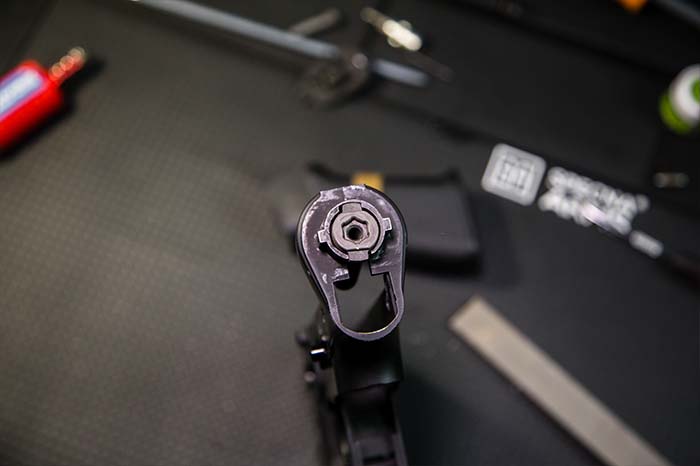 I consider the assembly of the reinforced V2 CNC gearbox shell, Specna Arms Edition by Retro Arms successful. Working with this body is very pleasant and mostly hassle-free. It has many solutions that make life easier for airsoft service technicians, such as inspection holes for checking the operation of the gears while shimming or a hole that helps to correct the position of the anti-reversal lever. Thanks to well-chosen dimensional tolerances, I had no problems with assembling parts from various manufacturers available on the market.

When it comes to compatibility, in short, it should be similar to other gearbox frames from Retro Arms. From the information I found on the Internet, it appears that matching the Specna Arms airsoft guns of the One and H series may require a bit more effort. As you saw in the article, it fits Specna Arms Edge guns without a problem. It will also fit the Core series guns, if you want to assemble a gearbox skeleton from them, almost equal to the base price of the replica. It is important that after installing this part and making a minor modification with a simple file, we can still enjoy the quick spring change system, which is an important part of the Specna Arms line. If you are interested in how my Specna Arms E14 works with this gearbox, I invite you to my Instagram profile where it appears quite often.